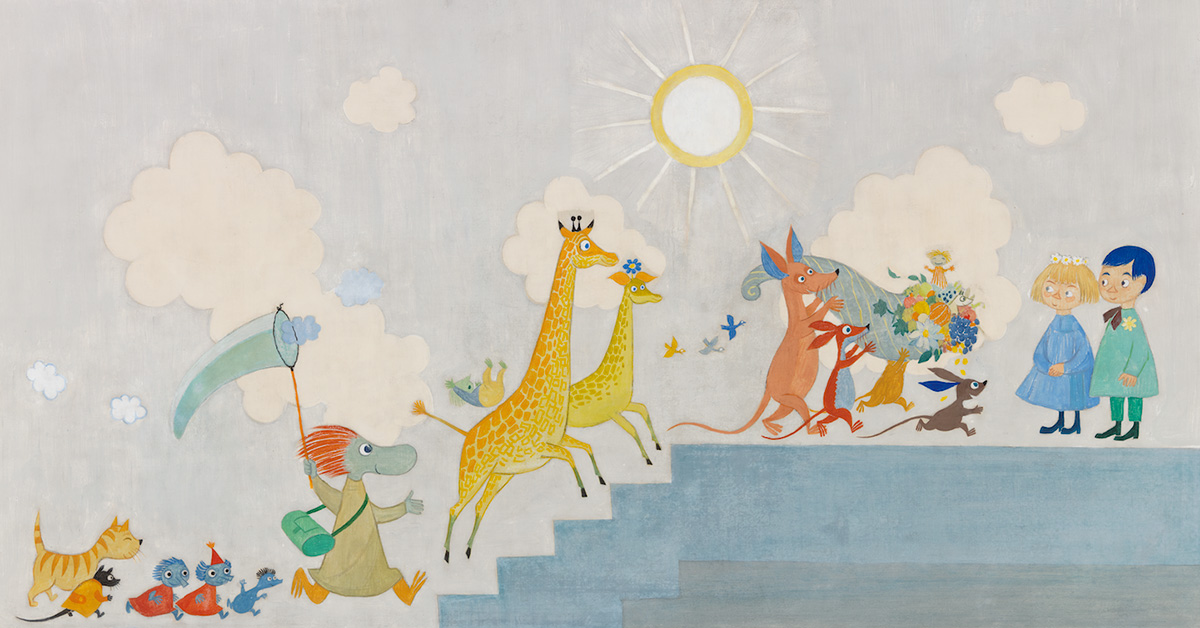 In addition to the Moomins, the artist Tove Jansson made herself known for her murals and works in large public spaces from the 1940s onwards. The themes Jansson used in her monumental works were often an escape from the harsh realities and misery of war. In addition to storytelling, the works were intended to entertain and invigorate.

Have a look at the most famous monumental works by Tove Jansson and read additional background info and see more photos in our previous articles.

The stained glass windows in Restaurant Tullinpuomi were the first public space works, Tove Jansson did. The decorative paintings of the elevator doors at the restaurant in Helsinki, Finland were completed in 1941. 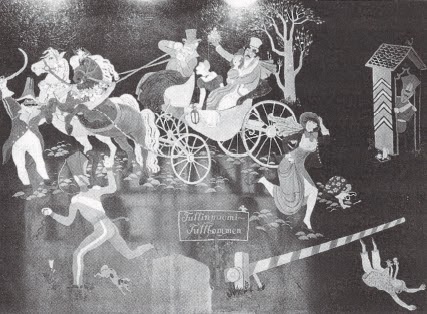 Tove Jansson’s decorative window painting continued a few years later in the windows of girls’ school at Apollonkatu in Helsinki. Currently, a copy of Jansson’s original work is on display at the same premises that are now used for elementary school Minervaskolan.

Tove Jansson received the first major commission of her career from the electromechanical company Oy Strömberg Ab in 1945 – a fresco for the factory’s canteen in Pitäjänmäki, Helsinki.

Tove wanted to help workers relax and thus painted a moment of leisure. The client, however, would have preferred a picture that featured the factory, so Tove painted another piece featuring lightning bolts and power cables that clearly allude to electricity.

The murals in the canteen of Strömberg’s Pitäjänmäki factory, Electricity and Resting after work, were completed in 1945.

In connection with a renovation of the factory in the 1960s, the works were removed from the canteen and donated to the City of Helsinki. The works were recently on display at the Helsinki Art Museum at HAM, but at the moment the works can only be seen in the pictures below.

In 1947 the City of Helsinki commissioned two large wall paintings from Tove Jansson. Paintings were originally made for a restaurant at the Helsinki City Hall. When she painted the frescoes, Party in the countryside, and Party in the city in 1947, there really was a cause for celebration – the war was over and there was again the freedom to celebrate and dance.

In 1974 the frescos were moved to the lobby of Arbis, the Swedish-language adult education centre in Helsinki. In 2014 Ateneum borrowed the frescos for Tove Jansson exhibition and Arbis got high-quality copies for their premises. Now after renovation the original frescoes have been relocated to Helsinki Art Museum HAM so that they are maintained in good condition in the future as well. 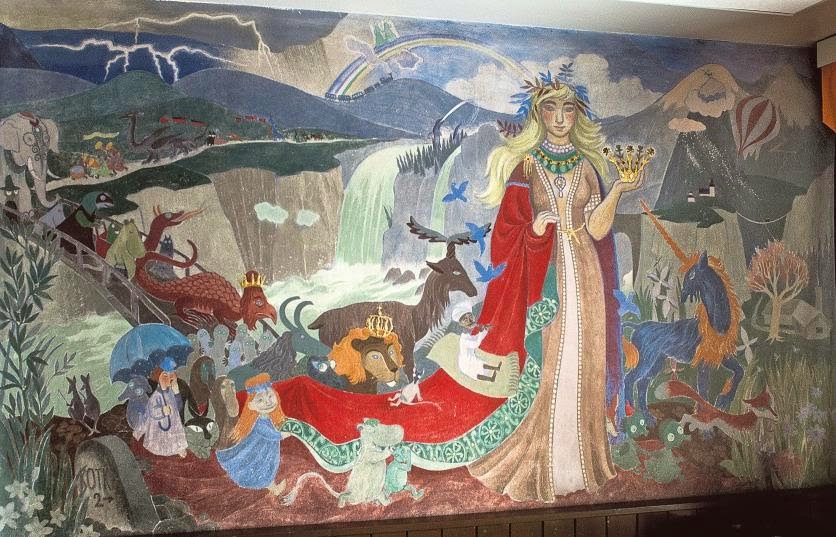 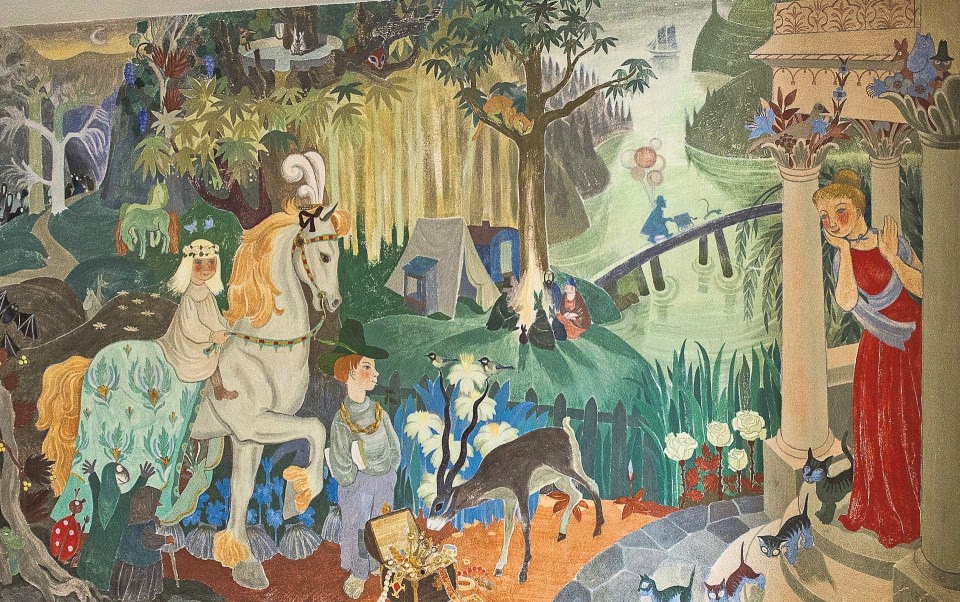 The former kindergarten premises now serves as office space for the administration of early childhood education in the city of Kotka and the works are not in public display.

In 1952, A few years after the paintings at kindergarten in Kotka, Tove also painted a mural for the canteen now serving Etelä-Kymen Vocational College in Kotka. The subject of the painting, the sailor, the lighthouse, and the mermaid shows how it used to be a canteen of the Maritime school.

The painting on the canteen wall has suffered over the years, for example, due to canteen chairs and food splashes. The plaster has become detached in several places and according to historical data, the Moomin figure in the work may have dropped from the wall at some point due to damage to the lower part.

City of Hamina in Finland commissioned two murals from Tove Jansson to celebrate the city’s 300th jubilee in 1953.

Tove Jansson’s mural A Story from the Bottom of the Sea was completed for the Clubhouse in Hamina in 1952 portraying the sea. Another painting from 1952 presents the history of the city of Hamina. 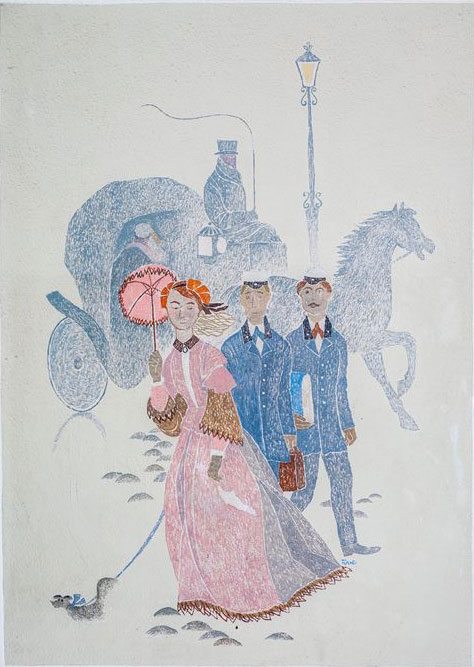 In 1953, Tove Jansson painted the Domus Academica’s student dormitory in Helsinki and decorated the elevator doors in the lower lobby. Tove Jansson lived on the property in the 1940s and left her handprint on the walls of the building. See Jansson’s numerous other works of the spaces here. The well-known Ilmari Tapiovaara also once worked in the property, creating e.g. Domus chair specifically for use in the premises. Domus Academica, which later operated as Hostel Domus Academica, renewed its brand during the spring of 2019 and now operates as Both Helsinki hostel.

Tove Jansson’s al secco mural, Lintu Sininen, was completed in 1953 in the large dining room of the Karjaa co-educational school. 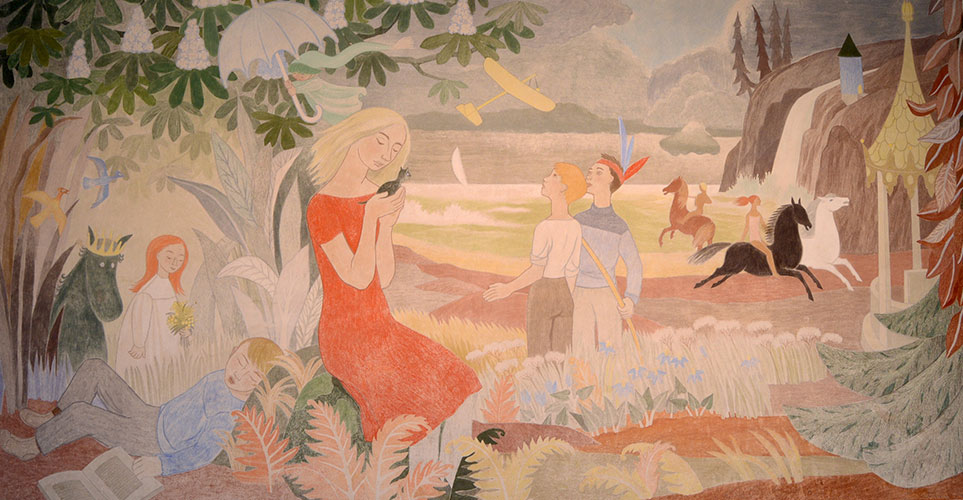 Below a story by art historian Solveig Eriksson. Read the full story in Finnish or Swedish here.

In Karjaa, Finland, Tove Jansson commissioned to decorate the dining room of the building designed by Hilding Ekelund. The building then belonged to a Swedish-language elementary school.

The mural is 190 cm high and 360 cm wide and covers most of the back wall of the dining room and is made with a secco technique directly on the wall. Jansson has used closer to forty shades of color when painting the mural. The colors of the mural are brilliant and variegated, almost every detail differs in color, and yet the whole is harmonious and balanced, almost sleepy idyllic. As an artist, Tove wanted to make her painting such that the children of the school could find the details in the picture that they liked. Tove has simply portrayed subjects that fascinated her as a child: the cat, the horse, the tower, the sea, and the waterfall.

In 1953 when a Västra-Nyland’s journalist asked Jansson about the painting if the boy who had fallen asleep by the stone had been reading his homework, Tove had replied: “Everyone has the right to fall asleep by something that is unpleasant!”

The answer well describes Jansson’s humane attitude spiced with her humor! Jansson had also said of the Moomintroll on the left: “The Moomintroll in the painting is very shy, which is why he hides among the vegetation. The troll always changes color according to the mood. He’s not very smart or talented anyway, but a very kind and very nice troll.

Elsi Borg, the architect of the Teuva Church ordered an altarpiece for the church from Tove Jansson. In a month, Tove painted a five-meter-wide altarpiece directly onto the wall of the church under construction in the summer of 1953, after spending the entire spring planning and preparing her work. The altarpiece Ten Virgins is the only altarpiece Tove ever painted.

Teuva Church is still in use and the altarpiece can be seen during the church visit.

Three meters wide tempera painting on canvas is now owned by the Art Foundation Merita and is no longer in its original location or seen public at the moment.

During the years 1955-1957 Tove Jansson painted murals featuring Moomins for the staircase of the Aurora Children’s Hospital in Helsinki, Finland. The idea behind the work, called Play, was that children would get excited to watch the Moomin characters play and possibly forget about being in the hospital. 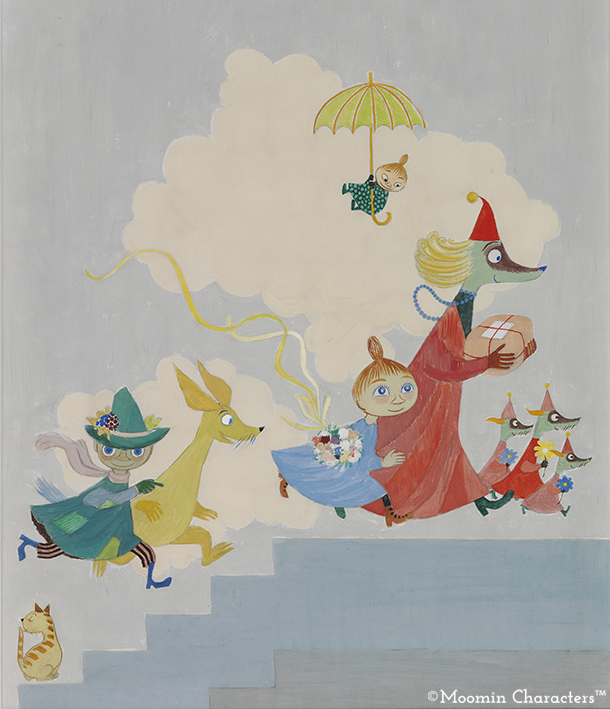 Moomin paintings delighted over one million children and their families in Aurora while the outpatient clinic was in use. Aurora’s children’s units were relocated to Helsinki University Central Hospital in 1997 and in 1998 Kari Petäjä and Maija Poskiparta made a copy of the mural for the staircase of the Children’s Hospital.

Finland’s first permanent gallery dedicated to Tove Jansson’s art at the Helsinki Art Museum HAM used to present sketches of Aurora Hospital’s murals from the 1950s. In addition to the original sketches, a partial copy of the children’s hospital mural was also on display at HAM. Unfortunately, the works aren’t currently on display.

The three-part mural at Taikurinhattu kindergarten, 1984 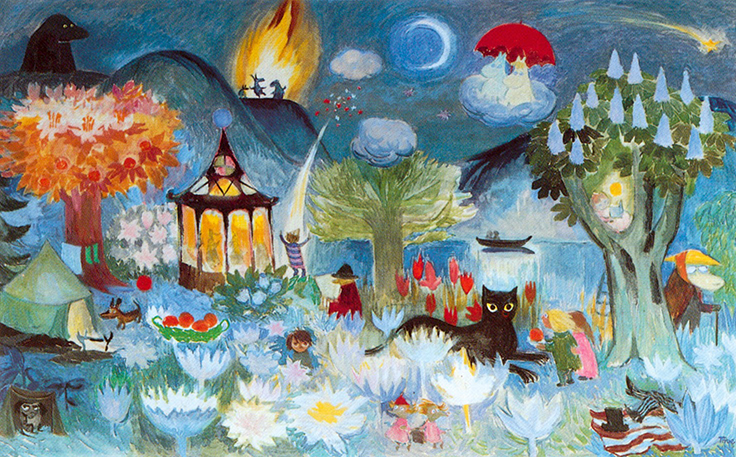 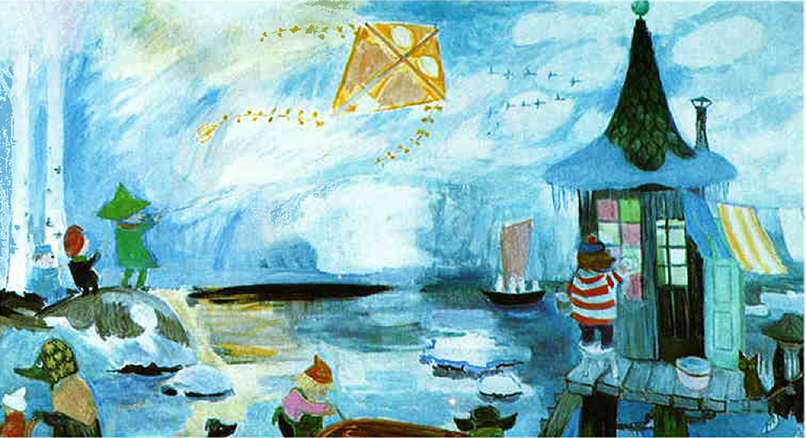 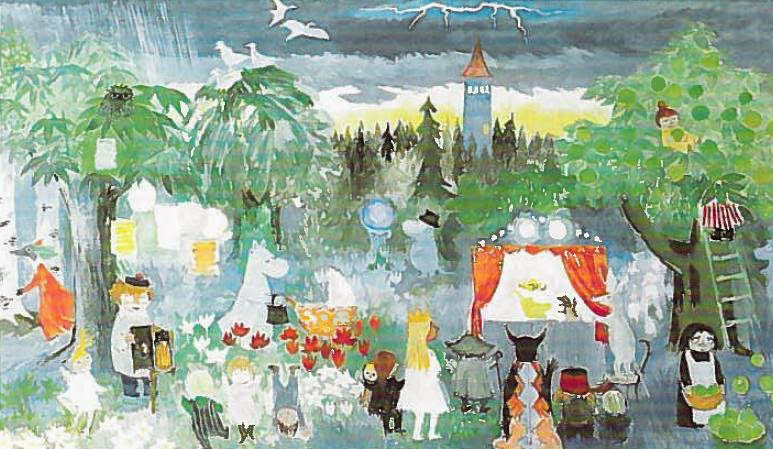 In 1984, 70-year-old Tove Jansson painted her last monumental work for the Taikurinhattu (Hobgoblin’s hat) kindergarten in Pori, Finland. The three-part mural in the festival hall presents Moominvalley in spring, summer, and autumn.

The kindergarten is designed by Tove’s life companion Tuulikki Pietilä’s brother and his wife, architects Reima and Raili Pietilä. The name of the kindergarten refers to Tove’s book Finn Family Moomintroll (Taikurinhattu in Finnish.)

Tove Jansson brought light and color to Finland recovering from the wars in the 1940s and 50s with her versatile murals and monumental works in public spaces. Although some of the works are aimed directly at children, adults can also find different levels in them. Just like in Tove Jansson’s Moomin books.