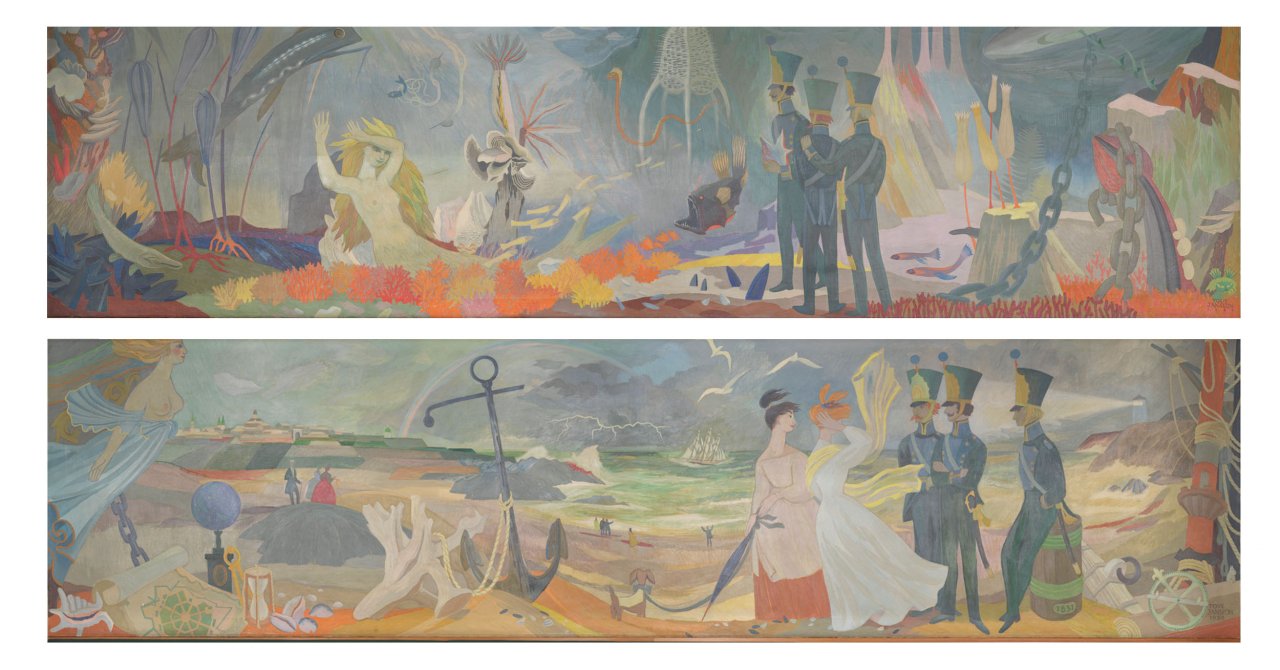 In 1952, Tove Jansson painted two giant murals for the city of Hamina. This summer, they are shown to a greater public for the first time in an exhibition. The exhibition Tove Jansson and the Sea also features many other sea-themed works by the artist. Read more about how Tove Jansson transported the 5,5 metre-long pieces by bus to Hamina, and where you can spot the Moomintrolls in the paintings.

Tove Jansson finished two monumental wall paintings in 1952: a pair of murals commissioned by the city of Hamina for its 300th anniversary. The topic given to Jansson was the history of Hamina and especially the cadets, who had received military training at the Finnish Cadet School in Hamina from 1821-1903.

One of the murals depicts the history of the fortress city set in a coastal landscape, the other one is a more fantastical take on the events seen from an underwater perspective. Tove Jansson included many of her favourite topics in the paintings: a thunderstorm and a sailing ship flying in the waves, a mermaid and several fantastical marine creatures.

This year, it is 70 years since Tove Jansson completed the murals, and the City of Hamina will celebrate the anniversary with an exhibition called Tove Jansson and the Sea, where both murals are on display for a wider audience for the first time.

Up until now, the murals have been stored at Hotel Seurahuone in Hamina, the space for which they were originally commissioned, but to which the general public doesn’t have access.

The paintings have never before been mounted in an exhibition. The 5,5 meter wide murals were transported some 150 meters through Hamina with great caution.

Six men carried the monumental works by foot, followed by a television crew and reporters. You can see the whole operation in this video by Finnish national broadcaster YLE.

Tove Jansson transported the murals on a local bus

When the paintings arrived in the coastal city of Hamina 70 years ago, Tove Jansson delivered them herself. She travelled about 150 kilometres from Helsinki to Hamina by bus, with the canvases rolled up to make the transport easier.

Contrary to some of her other murals, Tove Jansson had painted the monumental works commissioned by the city of Hamina on canvases in her studio in Helsinki.

One of the murals is without a title. Set on a seashore, it depicts Hamina in the first half of the 19th century. The foreground shows cadets and female figures in Biedermeyer costumes, and maritime items like anchors, ropes, an hourglass and a ship’s figurehead. The globe standing on a pedestal resembles the crystal ball in Moominvalley, and there’s a lighthouse shining its light on the stormy sea. The Town of Hamina itself with its towers can be seen further afield. 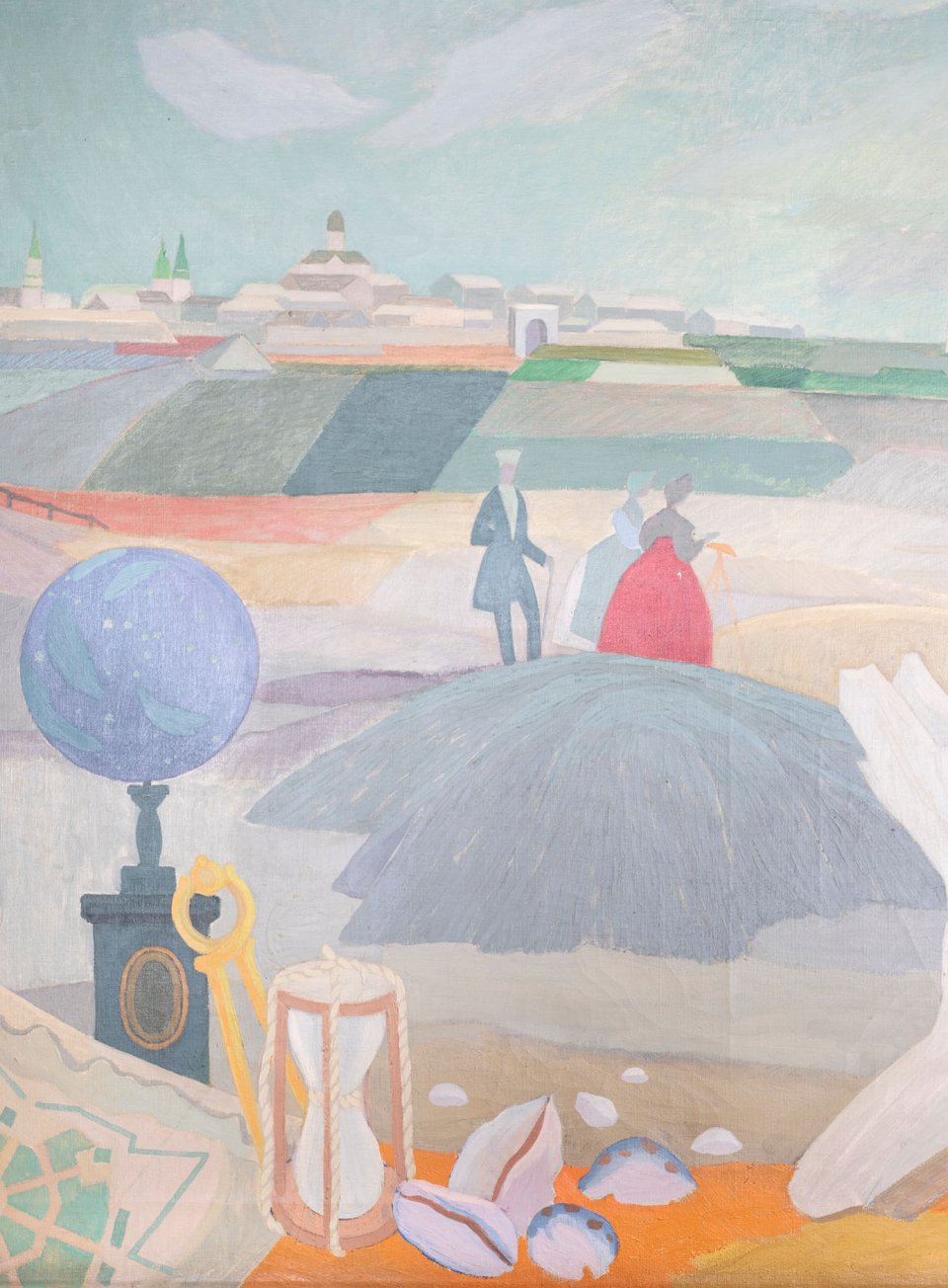 A story from the bottom of the Sea

The colour palette and the coral-like underwater flora are credit to Tove Jansson’s imagination, rather than realistic illustrations of the aquatic life of the Baltic Sea, even though there is an indigenous pike here as well.

In addition to the more naturalistic underwater imagery, fairytale-inspired animals reminiscent of Jansson’s work as a creator of children’s books can be spotted here and there. The seabed painting also features an exceptional signature character: a green aquatic creature with a sharp gaze reminiscent of Little My. 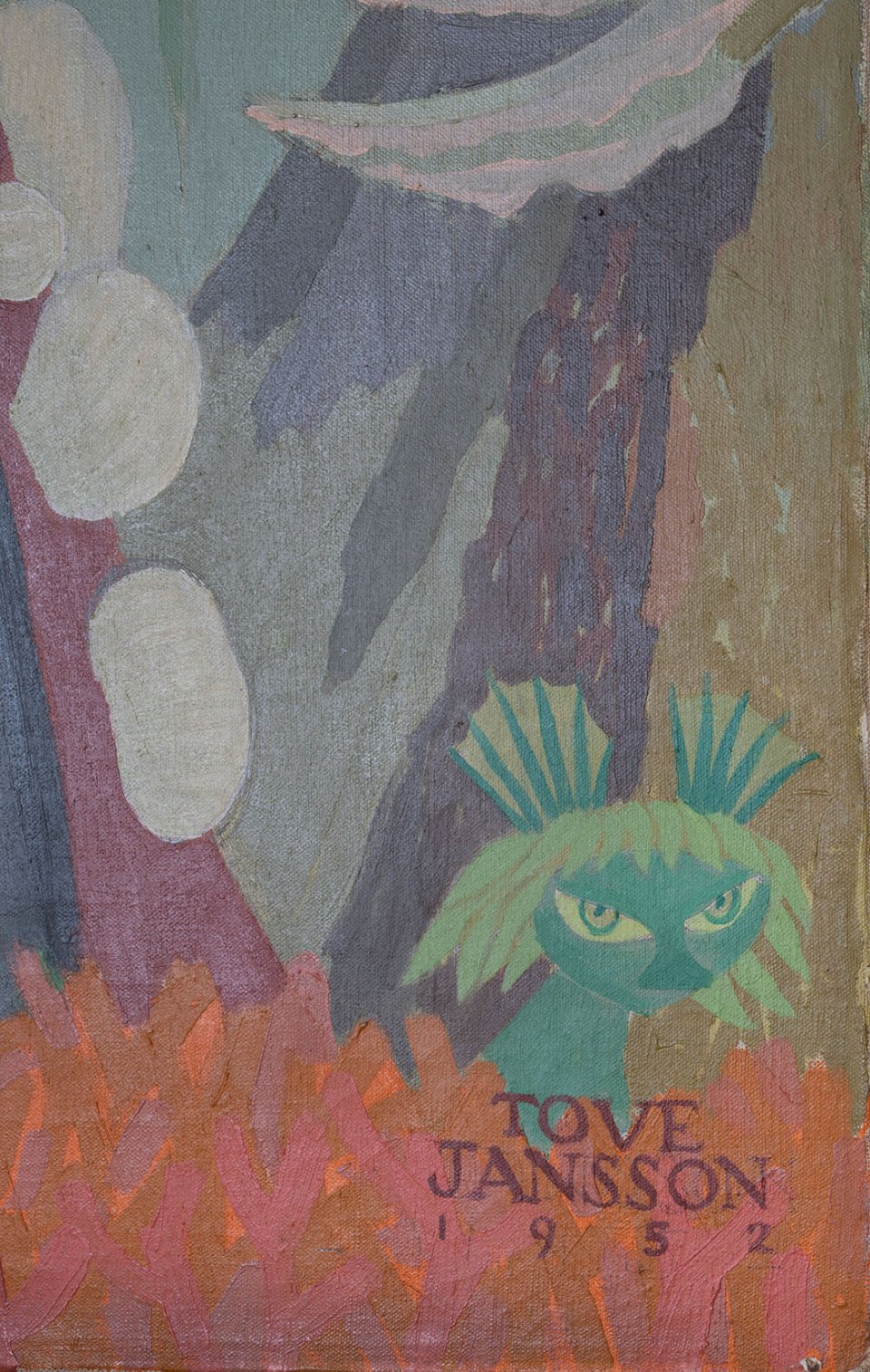 The curator of the exhibition Tove and the Sea, Alexander Reichstein, who also curated the well-received Moomin exhibition at the National Museum of Finland in 2020, appreciates the playful storytelling in the paintings.

“Tove Jansson was very serious about her art and her work as a painter. But she was also very funny and had a great sense of humour, which can be seen in these paintings. It credits the city of Hamina that they dared to commission these kinds of works for their big historical anniversary in the 1950s. The paintings are far from the pompous style quite often associated with that kind of event”, Reichstein notes. 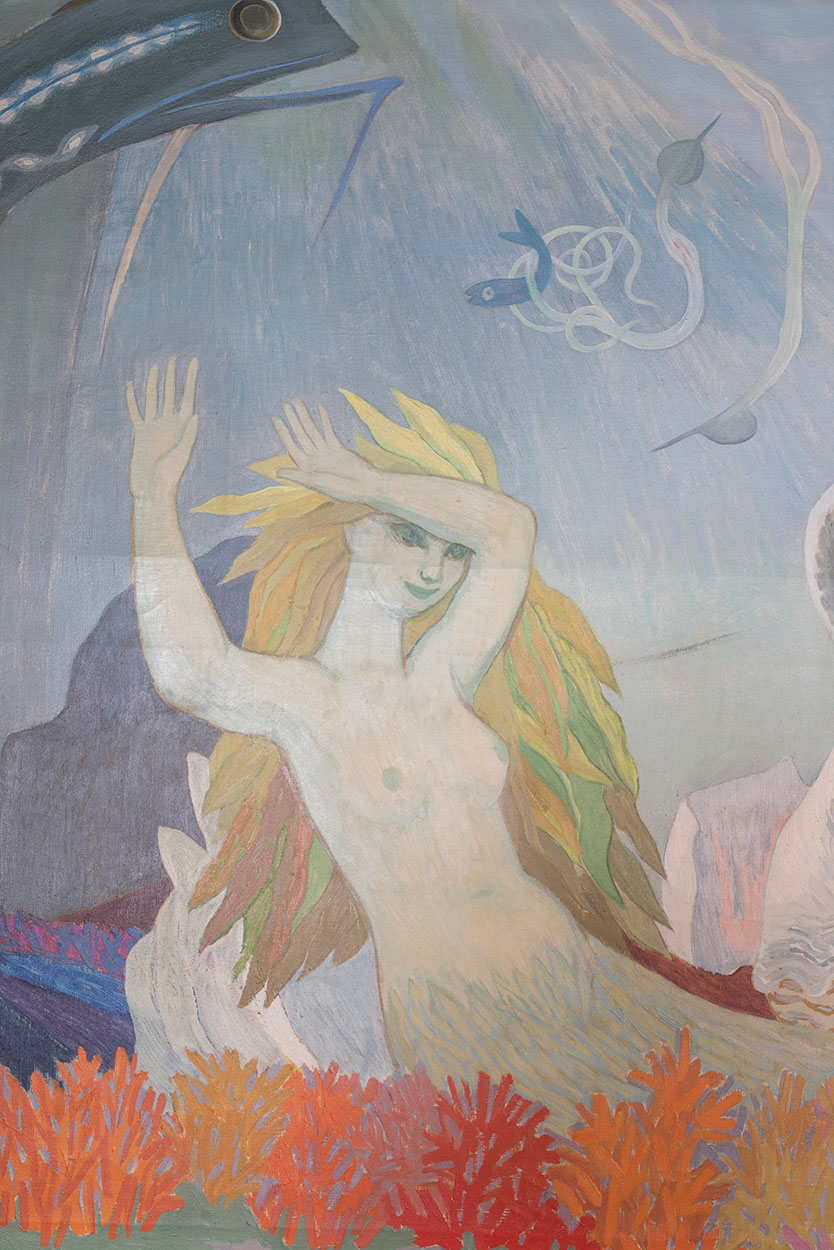 Both murals are also adorned with a small Moomintroll. As the fame of the Moomins grew, some inhabitants of Hamina started believing “their” Moomintroll were the first ones. This is not the case – the Moomins had been featured in Tove Jansson’s paintings and illustrations many years earlier, and several Moomin stories had already been published by 1952. 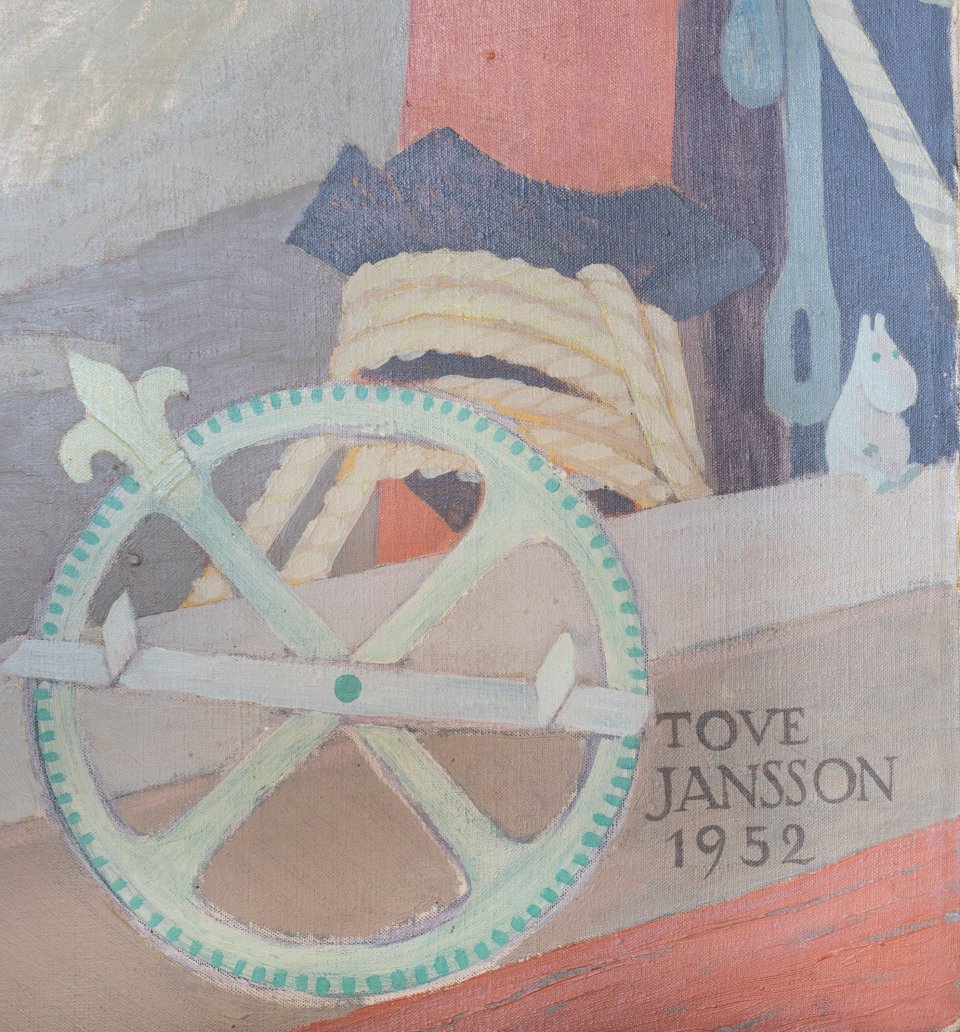 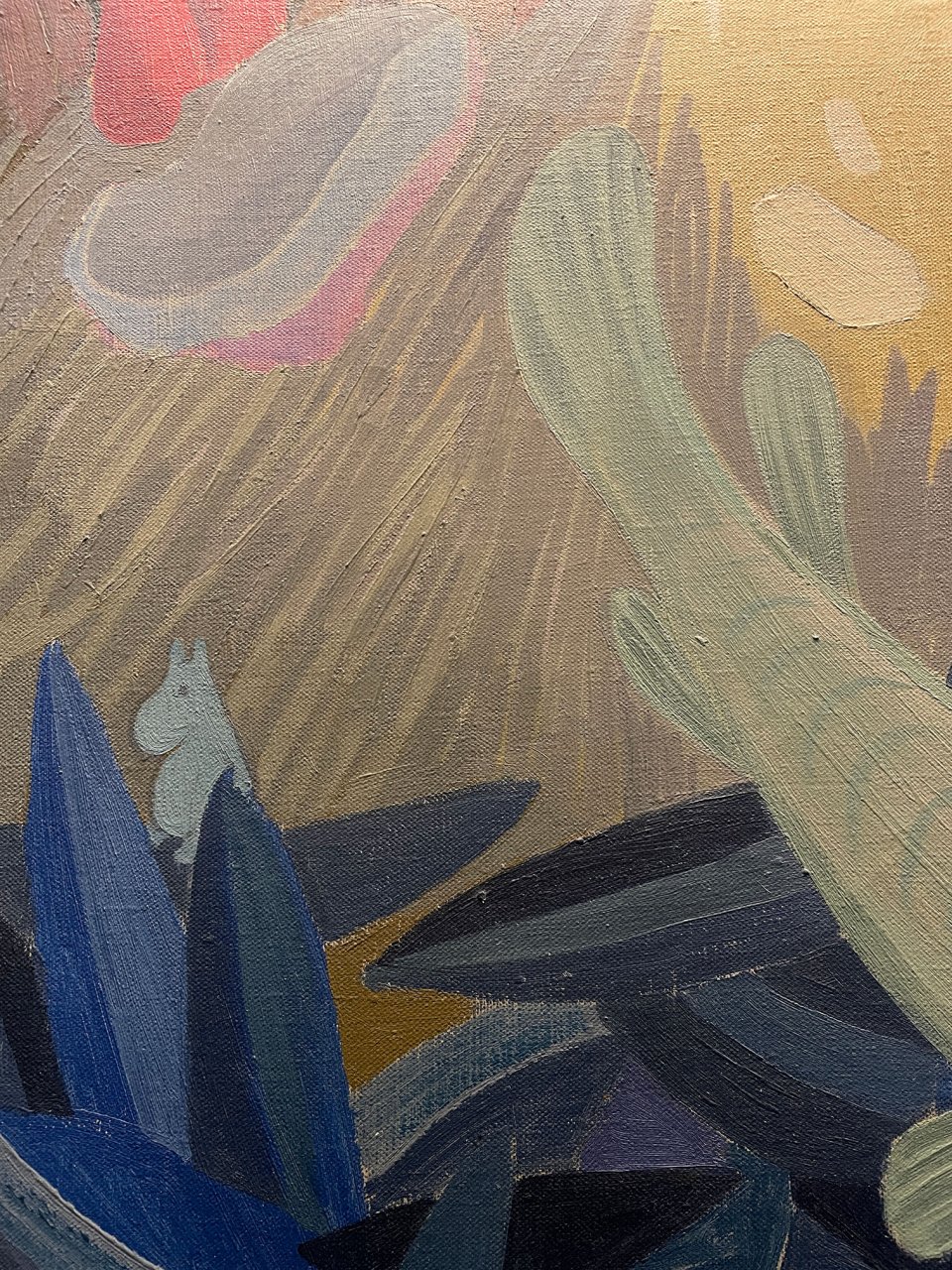 Watch paintings from a rowing boat

At the entrance of the City Hall, a small rowing Moominpappa is displayed in front of an enormous print of one of Tove Jansson’s abstract paintings. The room with the two murals is adorned with a giant lighthouse from the Moomin novel Moominpappa and the Sea. Shells, birds and other elements from the Moomin books are sparkled here and there around the exhibition facilities.

Visitors can also admire the murals while sitting down in a small rowing boat.
“It’s a boat I found in very bad condition cast away on the beach, which I have restored”, Reichstein mentions. Quite a Moominous way of using beach findings, one must say!

The advance that Tove Jansson received for the murals painted for the city of Hamina was a welcomed relief for the artist, who often struggled economically. She sometimes used paintings or illustrations as payment for dentist’s fees, tobacco, or fuel to heat her notoriously cold studio.

Tove Jansson used part of the advance for the murals to cover debts and unpaid taxes. She also spent some of the payment on canvases for smaller paintings done in the studio. Furthermore, the money allowed her to indulge in a nice bag and a new dress. ‘Now, for the foreseeable future, I’m poor again!’ she wrote after those purchases.

Exhibition open until the end of August

In addition to the murals, the exhibition Tove Jansson and the Sea also shows dozens of works by Tove Jansson from the collections of the artist’s family and Moomin Characters. There are both figurative works and abstract seascapes, including both illustration art and oil paintings.

The exhibition is open to the public from June 6th to August 13th, 2022 at Hamina City Hall. 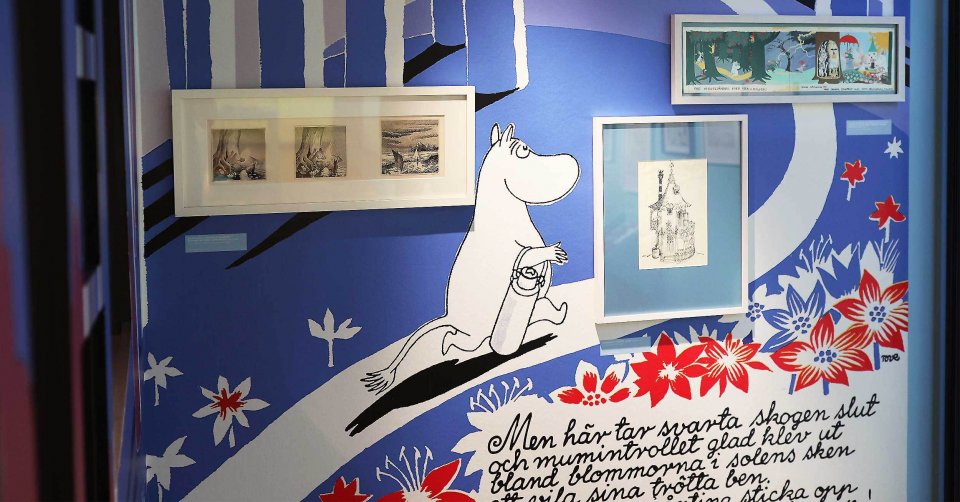 The most interesting Moomin and Tove Jansson exhibitions worldwide

Why not head to a Moomin exhibition on a rainy day this summer – here are the most interesting Moomin and Tove Jansson exhibitions around!

Have you ever seen these beautiful murals by Tove Jansson? Take a look at the murals Tove created for the city of Hamina in the 50s. 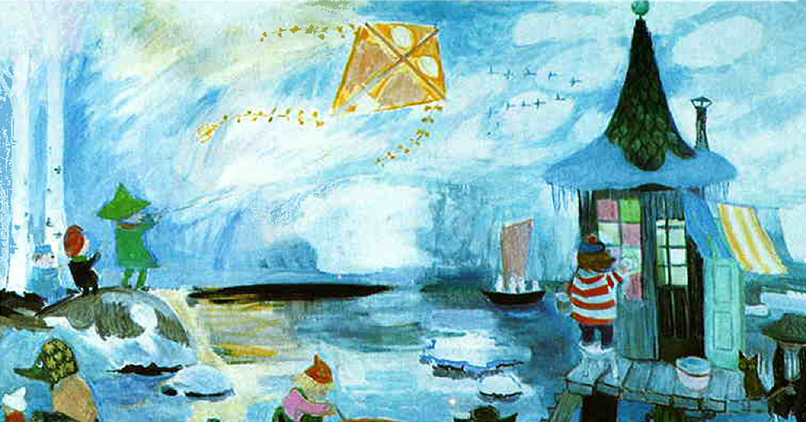 Did you know that Tove Jansson painted three Moomin murals in a kindergarten in Pori? The murals show Moominvalley in spring, summer and fall.