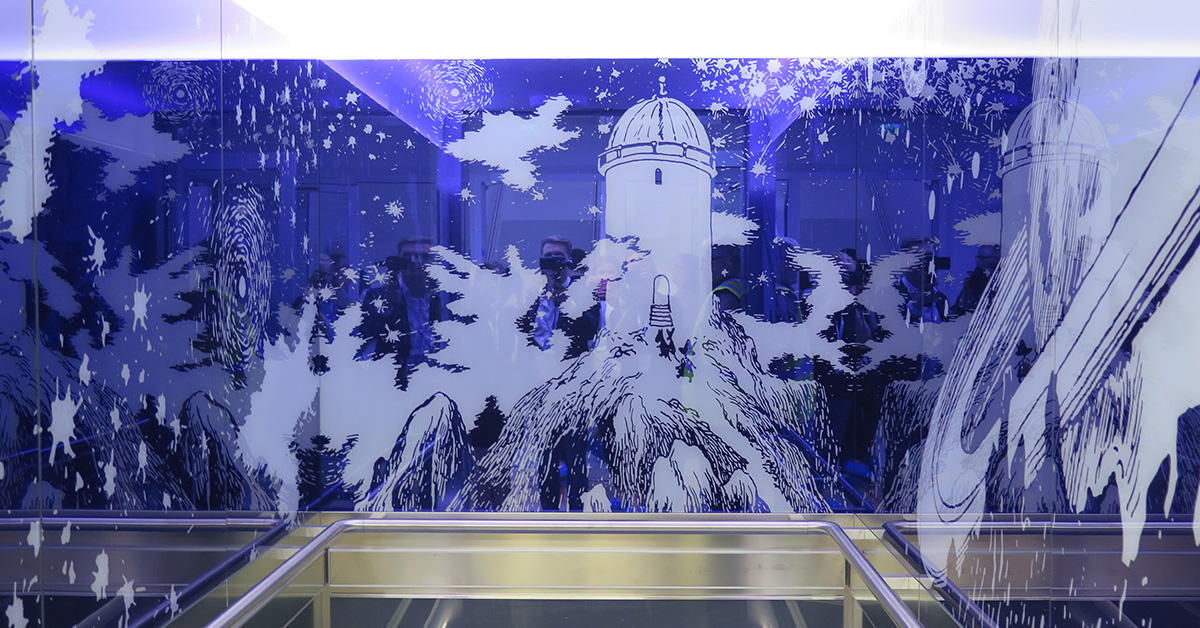 Already in 2011, a survey conducted by HUS, The Hospital District of Helsinki and Uusimaa, revealed that the premises of the Helsinki Children’s Hospital from the 1940’s were inappropriate for their purpose. Historically, part of the funding of a new public hospital was decided to be collected from companies and private persons. Thanks to donations of different sizes Helsinki has now received a new hospital specializing in pediatric health.

The timeless artwork, New Children’s Hospital, was entitled to use Moomin stories and the illustrations at the hospital premises for free. Moomin Characters Ltd managing Tove Jansson’s artistic legacy and Moomin copyright believes that Tove Jansson’s philosophy can help to create an environment for healing.

Tove Jansson’s niece, Sophia Jansson, said at the opening ceremony on May 18th: “Tove Jansson wrote her first Moomin stories under the shadow of the Second World War, and during the time she was deeply disturbed because of the war and felt it was difficult to concentrate on her full-time work, art. Thoughtful but humoristic Moomin stories were her way to escape the harsh everyday life into the fantasy world where only her imaginary was the limit. This, if any, shows the healing power lying in the stories.”

At the opening ceremony, among Sophia Jansson, a number of donors spoke clearly touched. Finnish ceramic designer Anu Pentik summarised the meaning of art: “Art is here to touch, comfort, inspire, and give energy.”

In the New Children’s Hospital, patients will be treated from newborns up to the age of 15, and with a holistic narrative and theme, the hospital premises create a pleasant atmosphere for children and young people of different ages.

SARC Architects and Architect Group Reino Koivula, Inc. have been responsible for the architectural design of the New Children’s Hospital. Especially the functionality of medical processes and the enjoyment of children and their parents in the hospital have guided the planning of the premises. One of the starting points for the interior design of different floors in the hospital was the emergence of a sense of security.

Antti-Matti Siikala, head designer of the project from Sarc Architects, said that, for example, the Moomin illustrations on the floors, walls, and ceilings also have their own meaning – the child can focus on something other than the potentially unpleasant operation he/she is having.

Architects have created an entity with “moominous” and “tove-like” feeling – Moomin stories are present more like an abstract level. Those who know the Moomin stories well understand from which story each illustration or quote is from but the successfully selected graphics give a positive feeling also without having any knowledge of the Moomins.

Taking care of others was important for Moomin creator Tove Jansson, and thanks to her stories people around the world have been consoled. The happy endings of the Moomin stories played an important role in hospital’s architectural design work, and the comforting Moomin stories are hoped to support the families in the hospital.

Every night over 100 patients will be staying at the hospital and some of them need treatments longer than others. Different activity rooms like playrooms and music rooms are designed for the ones staying at the hospital longer. Rooms named after different characters, Snufkin, Too-ticky, Fillyjonk and Thingumy and Bob, are there to cheer up the little patients.

Each floor of the hospital has its own Moomin story selected and story’s themes are repeated in the colors of the floor, in the signs, on the walls, and in Moomin quotes written in different languages. Floors from the basement to the top are Sea (Meri in Finnish), Beach (Ranta), Jungle (Viidakko), Forest (Metsä), Valley (Laakso), Magic (Taika), Mountain (Vuori), Space (Avaruus) and Star (Tähti). The wards are Star, Space and Mountain and cancer and transplant patients are treated at the Magic ward.

The new children’s hospital facade has up to 800 windows and the building can be identified as a children’s hospital with its colors from a longer distance. Colored glasses create a varied view according to the viewer’s movement. The Finnish elevator manufacturer, KONE has designed and manufactured special elevators inside the hospital full of feeling and storytelling with new glass walls and Moomin graphics.

Already in the 1950s Tove Jansson painted murals featuring Moomins for the staircase of the Aurora Children’s Hospital in Helsinki, Finland. Moomin paintings delighted over one million children and their families in Aurora while the outpatient clinic was in use. Aurora’s children’s units were relocated to Helsinki University Central Hospital in 1997 and in 1998 Kari Petäjä and Maija Poskiparta made a copy of the mural for the staircase of the Children’s Hospital where the paintings are still delighting children every day.