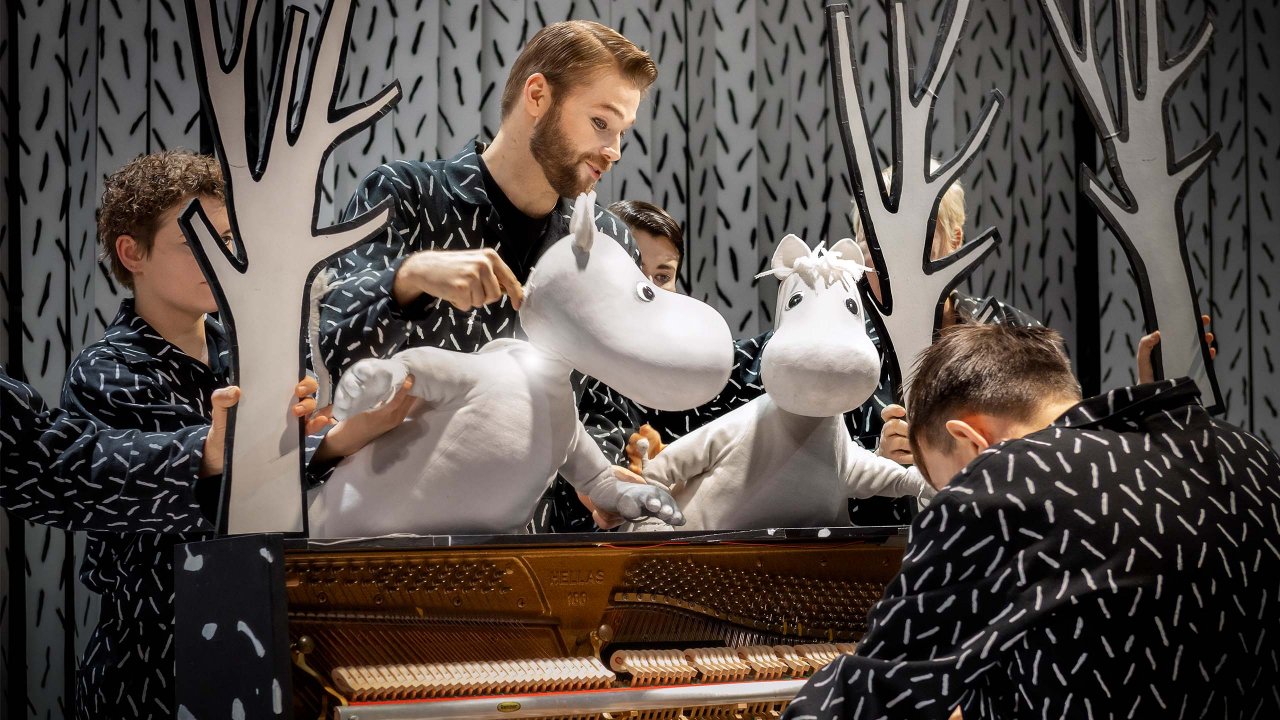 Moominvalley and its wealth of characters have been brought to life on the stage before, but never like this. Tove Jansson´s Moomin comics come to life for the first time ever at Lilla Teatern.

The play Kris och katastrof i Mumindalen (“Crisis and Catastrophe in Moominvalley”) had its world premiere at Lilla Teatern in Helsingfors in the beginning of October, 2022. The play, which received raving reviews, is the first play based on Tove Jansson´s comic strips about the Moomins.

The first Moomin comics were published in Ny Tid in Finland in the end of the 1940s, but it was through the contract with the London-based newspaper Evening News that the comic strips reached a bigger audience. The comics were syndicated in over 40 newspapers all over the Common Wealth and were read by more than twenty million readers each day. The Moomin comics were published between 1954 and 1975 and were first drawn by Tove Jansson, but after some years her brother Lars Jansson took over.

The play Kris och katastrof i Mumindalen has been in the works for a long time and in this video you get to follow the rehearsals and hear from the people behind the play.

Moomin comics as theatre: all black and white

The director and choreographer Jakob Höglund explains that the play is in black and white because the comics are in black and white. On stage, all kinds of puppet theatre esthetics are used and each character (they are many!) has its own kind of portrayal. The play is foremost aimed at adults, but also suitable for children from the age of ten upwards. Höglund tells us that he has wanted to make a play based on the Moomin comics since he started directing more than ten years ago. He is a very playful and imaginative director and through the years he has thought a lot about how Moominvalley and all its fantastic characters could be realised on stage.

The screenwriter Annina Enckell says that the first act is social satire told in a comical way and the second act is about our smallness in nature and about existing in the world. 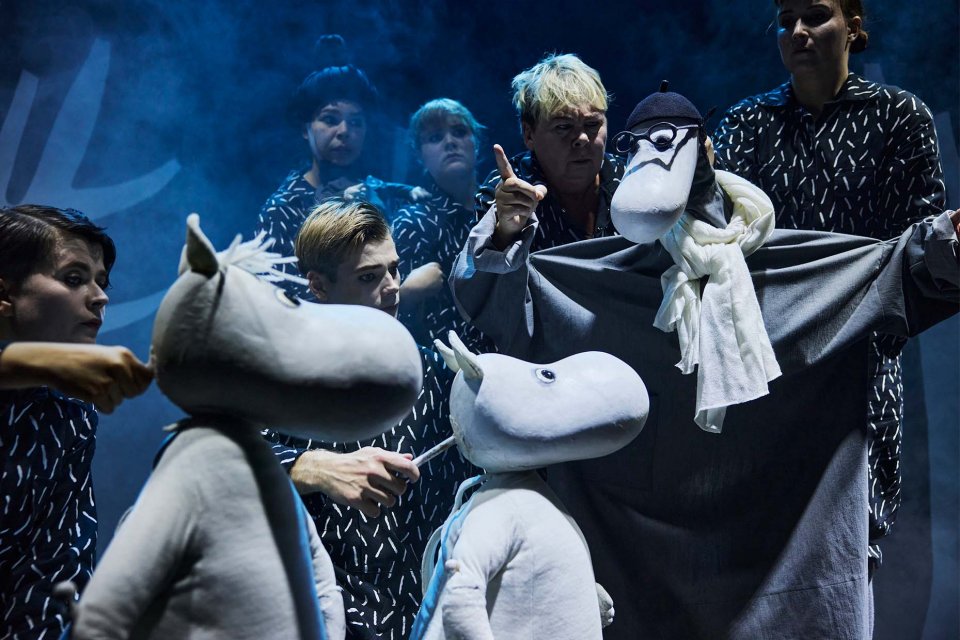 The fantastic puppets and actors

“For a puppet designer, this is a once-in-a-lifetime chance”, the puppet designer Heini Maaranen says about her work with the play. “It´s a challenge, a very positive challenge, to recreate, or even reinvent, the creations of another artist”. With more than a hundred puppets in the play, it was an enormous jigsaw puzzle for her to figure out how to make the different characters unique and varied.

The puppeteer Riina Tikkanen handles more than twenty puppets in the play. She is Sniff, but she also steers for example the left hand of the Moominmamma or the but of the Moominpappa. “Dr Schrünkel is a very demanding puppet. Joachim Wegelius is the head and he has a massive costume on, while Reetta Moilanen and I steer his hands.”, Tikkanen explains.

The actor Pia Runnakko, who plays Misabel amongst other characters, tells us that she loves the Moomins and that the most fun thing with the process of rehearsing the play has been that they get to play so much, that they´ve become like kids again. “I played with dolls and stuffed animals a lot as a child and this resembles that a lot, it´s been a lot of fun”, says the actor Alexander Wendelin, who plays the Moomintroll amongst other characters.

The set design and the music

The set designer Sven Haraldsson describes that he stripped down the set design as much as possible and made a very simple space on stage. A set consisting of very few elements, a space that enhances the dolls, the actors and the props. 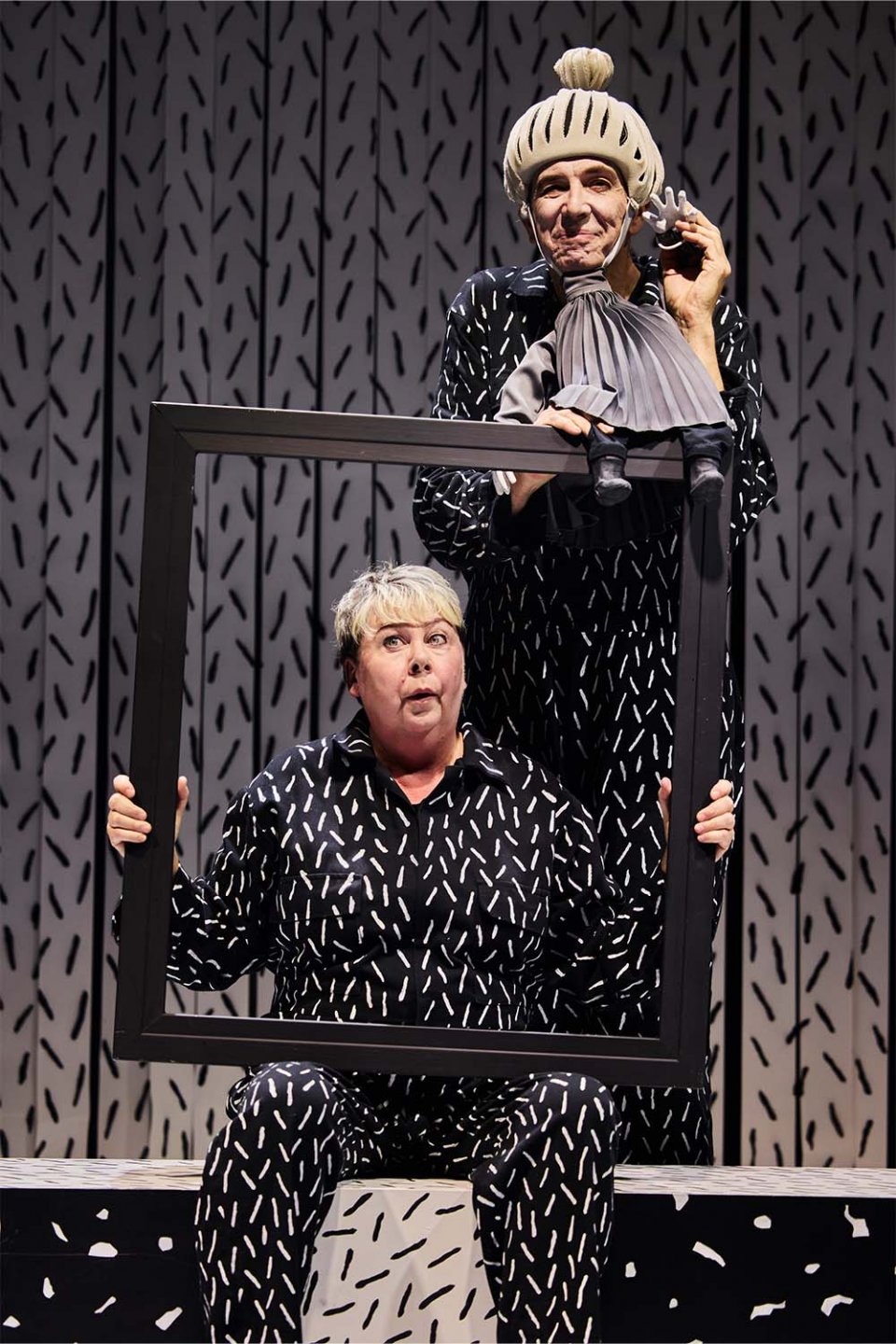 In Kris och katastrof there is a plenty of especially composed music and songs. The composer and actor Robert Kock, who also plays Moominpappa on stage, har composed the music to the and the screenwriter Annina Enckell has written the lyrics. In the first act there are spoken songs consisting of a kind of nonsense poetry and in the second act there are more traditional songs and music that according to Kock entails more melody, harmony and disharmony.

The common history of Tove Jansson, the Moomintrolls and Lilla Teatern

Tove Jansson wrote the screenplay and made the decor for the play Troll i kulisserna (“Trolls in the Wings”) for Lilla Teatern in 1958 and it was that play that made Lilla Teatern known throughout the Nordic countries. “We have pretty big shoes to fill with this play, considering the greatness of the actors in the previous play”, Höglund notes with a laugh, referring to amongst others Lasse Pöysti who played Moomintroll back then. Höglund continues and says that Kris och katastrof i Mumindalen is a much bigger play with ten actors on stage. He also explains that they are making an hommage to Troll i kulisserna through using a piano on stage, just like the composer Erna Tauro did with the previous play.

What is it like to turn the Moomin comics into theatre? What kind of social satire did the comics entail and what does today´s satire and social commentary look like? What is it like to portray Tove on stage and on film? What did Tove´s and Lilla Teaterns common history actually look like? These are some of the questions the moderator Andrea Reuter discusses with the guests Paul Gravett, expert on the Moomin comics and Tove´s illustrations (this talk is in English), Jakob Höglund, director of Kris och katastrofer i Mumindalen (in Swedish), Alma Pöysti, actor (in Swedish) and Ulla Donner, comic artist, Janne Wass, editor in chief at Ny Tid and Philip Teir, writer (in Swedish).

The afternoon also offers live music, mingle and a chance to meet the puppeteers of the play.