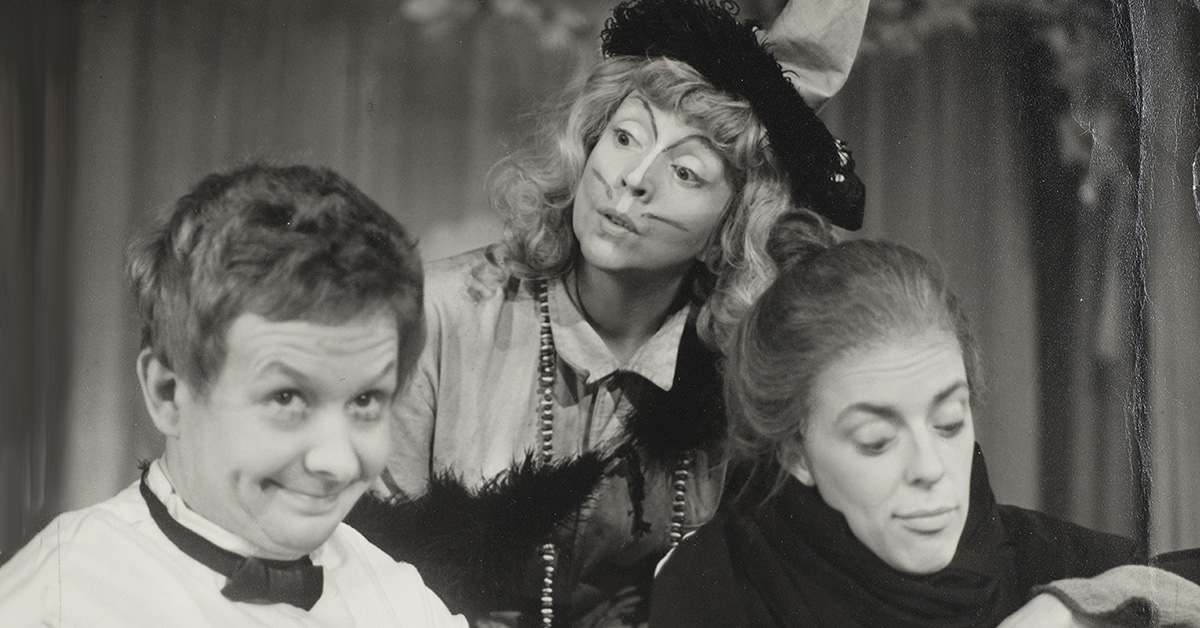 After the first Moomin-play, Mumintrollet och kometen by Svenska Teatern, Tove Jansson and Vivica Bandler returned to the world of Moomins less than ten years later at Lilla Teatern. Troll i kulisserna (1958) is based on Tove Jansson’s fifth Moomin book Farlig midsommar (1954, eng. Moominsummer Madness) which was perfect to turn into a play as the book is about the Moomin family escaping a flood and finding shelter at the theatre. Like the first time Tove Jansson wrote the play and designed the costumes and the setups and Vivica Bandler was the director. The young Ralf Långbacka worked as co-director.

Moomintroll was played by actor Lasse Pöysti from which he rose to fame in Scandinavia and determined for a long time how Moomintroll should be portrayed. From the group back at Svenska Teatern Birgitta Ulfsson took part in the second play as well, this time she played the stage rat Emma. During the Lilla Teatern play the beloved and known Moomin songs were first introduced when Erna Tauro came along and joined the work group.

As opposed to the first play at Svenska Teatern the Moomins had now made their breakthrough in Finland and around the world. The Moomins were known and the Moomin world had become familiar for the mainstream audience in Finland. This time it was not debated whether the play was fit for children but rather if the illusion of Moomins would break if familiar characters were seen at the stage again. Sole Uexküll said in his review that the play was a “Praise song for Moomins”. (HS 30.11.1958)

Like at the first play Mumintrollet och kometen at Svenska Teatern also the second, Troll i kulisserna -play had costumes with big heads and noses that not only covered the actors’ face and muffled the sound but also made moving around harder. The solution was as easy as everything else in Moominvalley: Moomintroll would arrive to the stage wearing the big mask but would take it off on stage. This way the actors got to perform without the difficult noses and got to express themselves properly.

Find out more about the play Troll i kulliserna and other theatre works by Tove Jansson at the exhibition Moomins at the theatre.