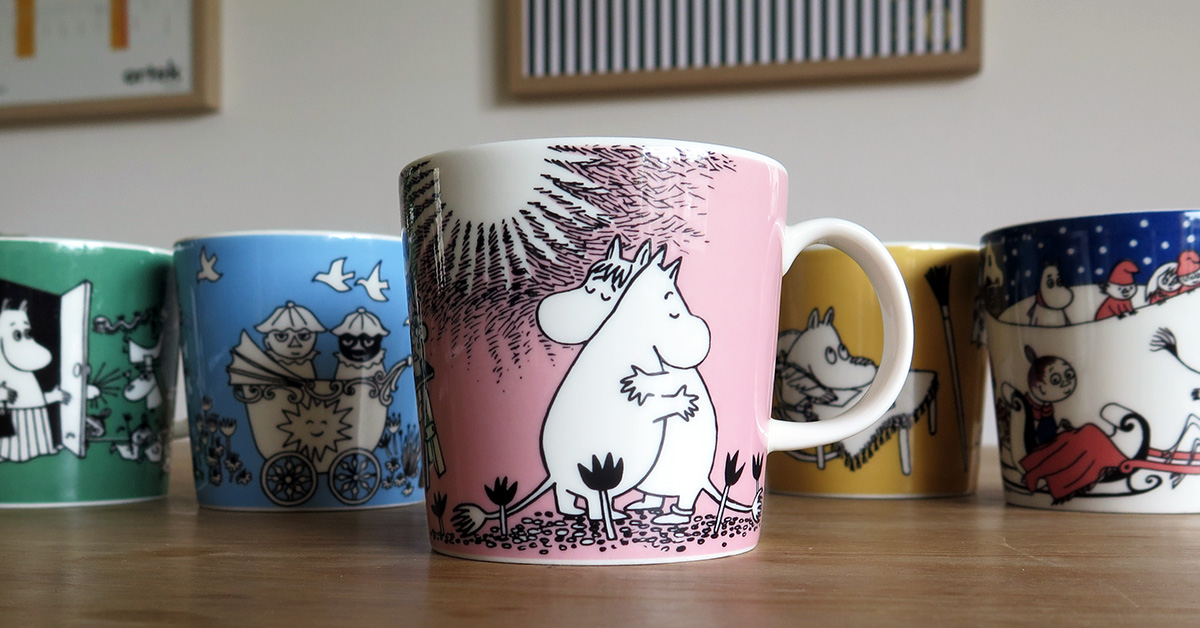 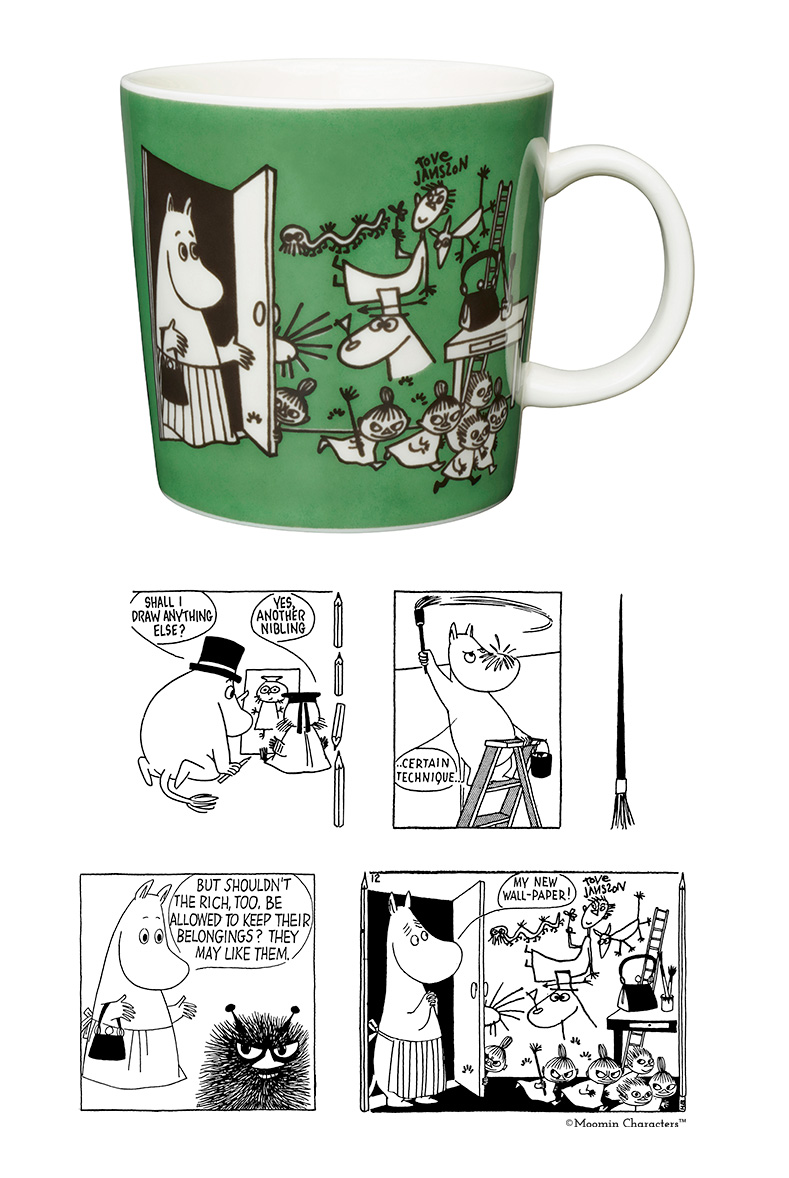 Can you spot the difference between the illustration in the mug and in the original comic panel? To guarantee the right atmosphere, Arabia’s mug designer Tove Slotte chose a happier Moominmamma to replace the one in the panel of the Moomin Builds a House comic. Quite nice, don’t you think?

One of Tove Jansson’s virtues as a comics artist was her innovative and pioneering way of using graphic elements from the strips to divide the comic panels. For the Drawing mug, Tove Slotte chose a brush from the comic Moomin Builds a House.

In the fifties, the comic panel dividers were usually just straight lines, but both Tove and Lars Jansson used different vertical graphic elements from the strips to make them unique. They used brushes, pens, trees, flowers, curtains, ropes, doors, hat stands, pearls etc. You can read more about the comics in our previous blog post here.

One of the most sought-after Moomin mugs is the light blue mug Peace from 1996. Tove Slotte chose the illustrations from Tove Jansson’s comic #04 Moomin’s Desert Island (1955) and also for the first time from a postcard designed in 1982 by Tove Jansson. 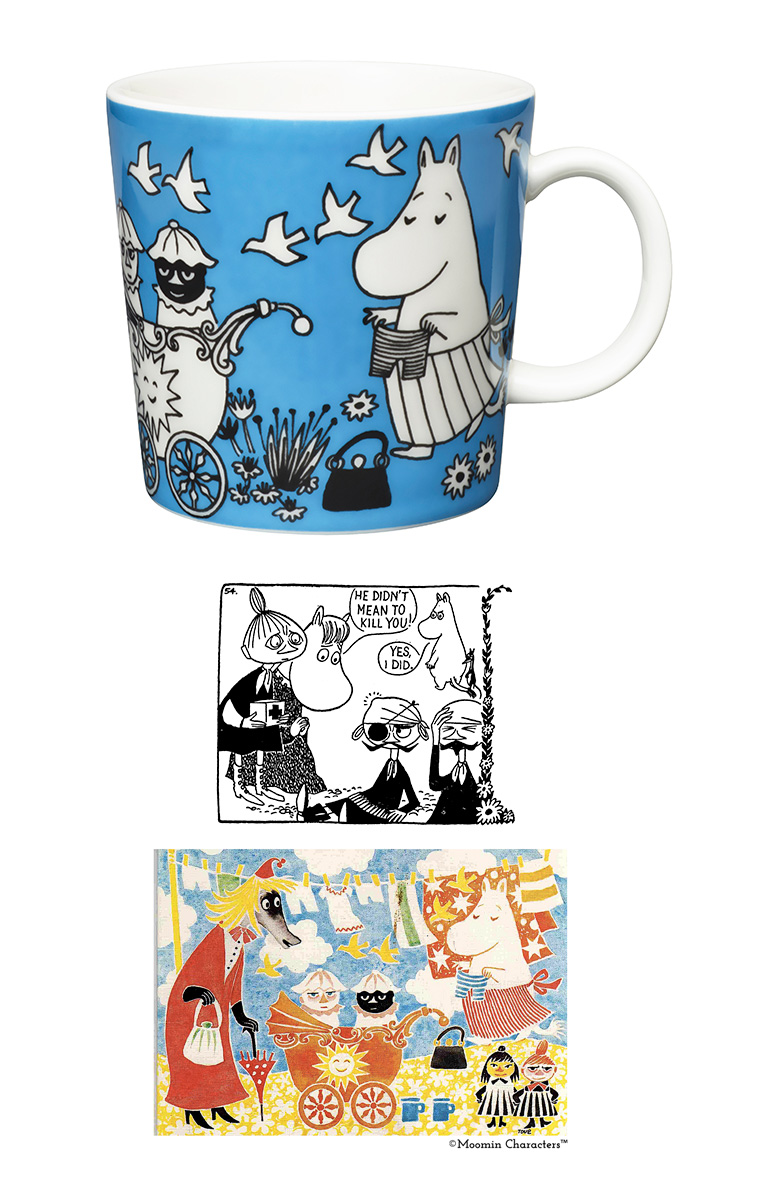 Throughout her career Tove Jansson allowed Moomins to be used by different organizations that shared her values. One of these organizations was Amnesty International, which reflects Tove Jansson’s values and her belief in equal rights. These projects not only show who Tove Jansson was as an artist, but also who she was as a human being.

Produced between 1996 and 2002, the Moomin mug Office is one of the most eventful Moomin mugs ever designed. Tove Slotte has chosen the illustrations from the following comics: 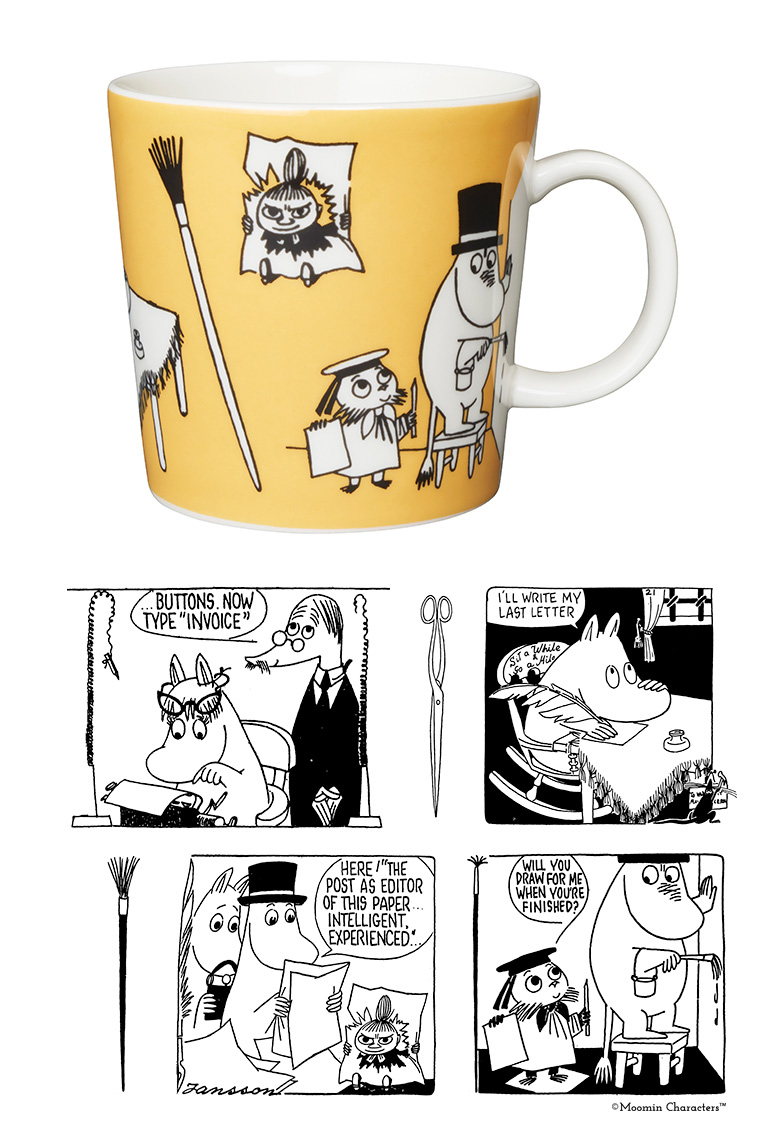 Just like Slotte did with the mug Drawing, also for this mug, she chose a vertical panel divider illustration. The inspiration for the scissors seen in the mug is both from the comics and the scissors Tove Slotte’s mother used to have.

One mug is above all: Love. The only mug from the 90s still in production is the light pink Moomin mug Love. Tove Slotte chose the loveable illustrations for the mug from Tove and Lars Jansson’s comic #15 Snorkmaiden Goes Rococo (1958) and Tove Jansson’s comic #07 Moomin Builds a House (1956). The sun was originally drawn by Tove Jansson in the comic #10 Moomin Valley Turns Jungle (1956) and one of the most beloved Moomin illustrations of all time, the hugging Moomintroll and Snorkmaiden, is from Jansson’s comic #11 Moomin and the Martians (1957). Maybe this illustration is one of the reasons for the enormous success of the mug? 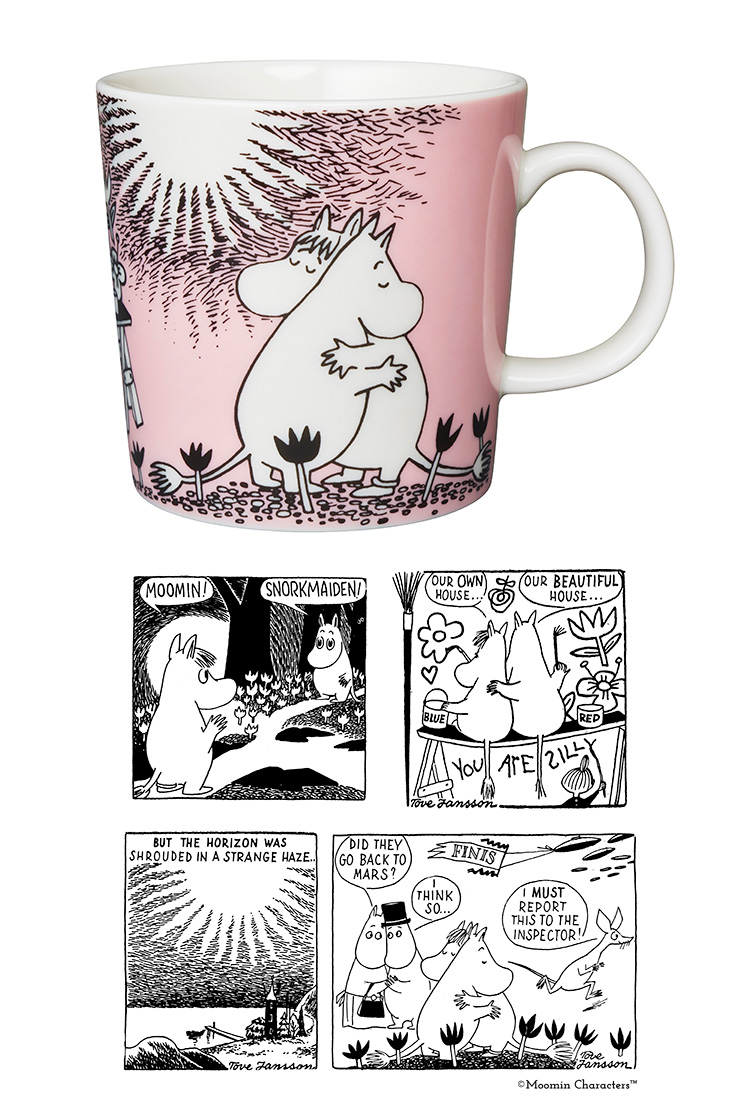 Even though the mug has been in production since 1996, it is still among the 5 bestselling mugs. The mug designer Tove Slotte believes that the emotional charge of the mug is one of the main reasons for its popularity: “The hugging Moomins is an adorable illustration, and combined with the light pink color it expresses one of the strongest emotions, love. Just like other Jansson drawings, also this is timeless and classical”.

Tove Slotte continued: “This mug is easy to give as a present. I have heard many stories of how this mug has been the first mug when people start collecting the Moomin mugs”.

Part of the Moomin mug design is from a postcard design, March for Peace, which Tove Jansson drew for the charity organization Unicef in 1981. The little elves in the mug are Tove Slotte’s interpretations based on Tove Jansson’s originals from the novel Fir Tree published in the book Tales from Moominvalley (1962).

The main illustration of the mug is from Tove Jansson’s comic #5 Moomin’s Winter Follies (1955). The small snowy Moominhouse in the background is Slotte’s own design based on different versions of the Moominhouses. 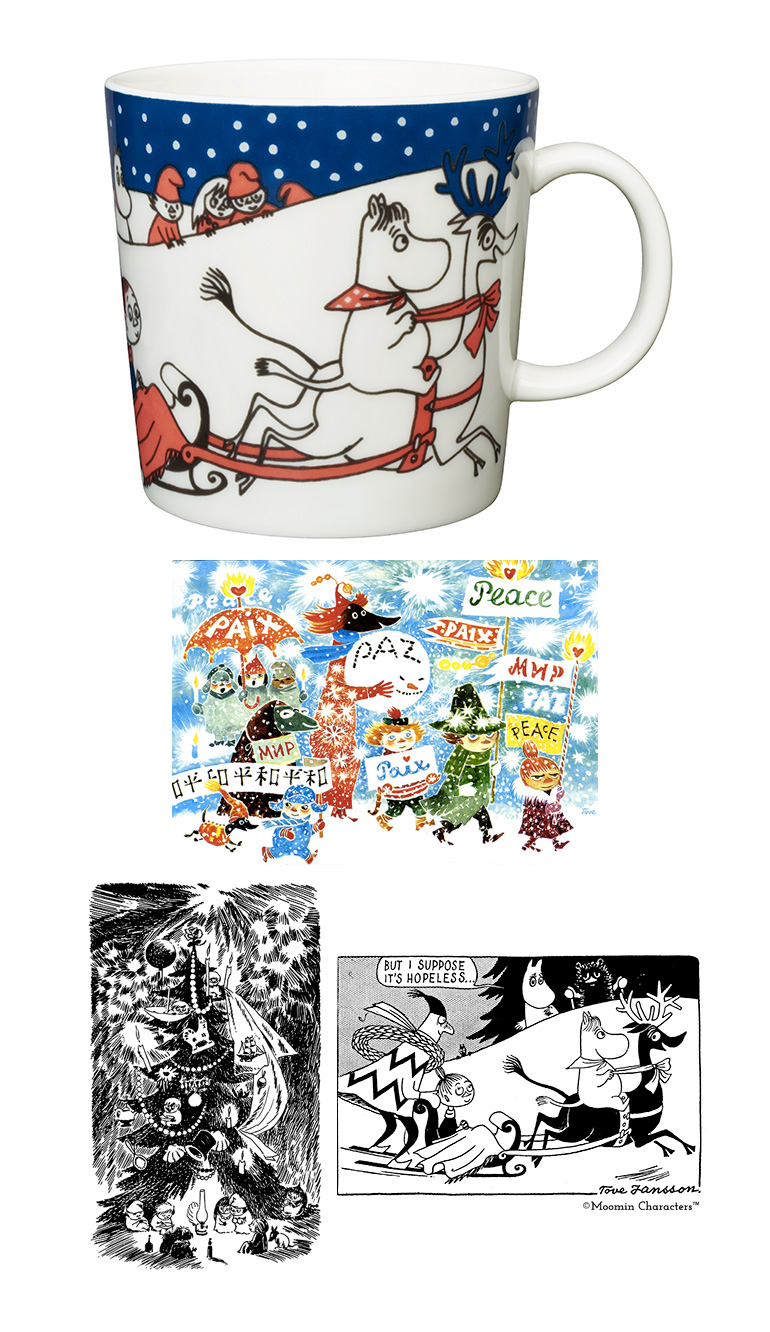 The Christmas Greeting Moomin mug started a so-called “series of special Moomin mugs” with its new coloring style. The previous Moomin mugs were designed with the characters taken out standing freely and only put on a colorful background, but in this mug, the selected drawings merge with the background.

As with the other Moomin mugs from the 90s, Christmas Greeting has become a popular collectible item and the value of it has risen to several hundred euros.

Also read the previous blog posts in our series: