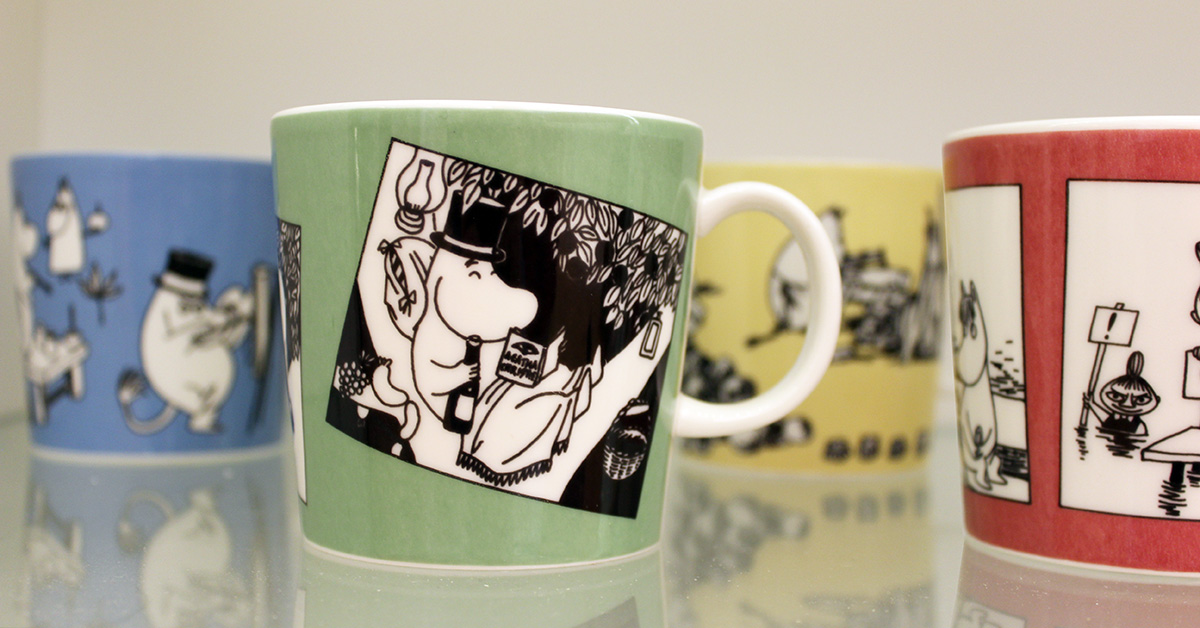 The first Moomin mug in the Teema series, Green, came in 1990. The mug is also known by the name The Green Comic Strip. The original artwork featured on the mug is from Tove Jansson’s comic strip #8 Moomin Begins a New Life (1956). Tove Slotte, the graphic designer responsible for Arabia’s Moomin products, used the images from the strip more or less as they were, only removing the speech bubbles. 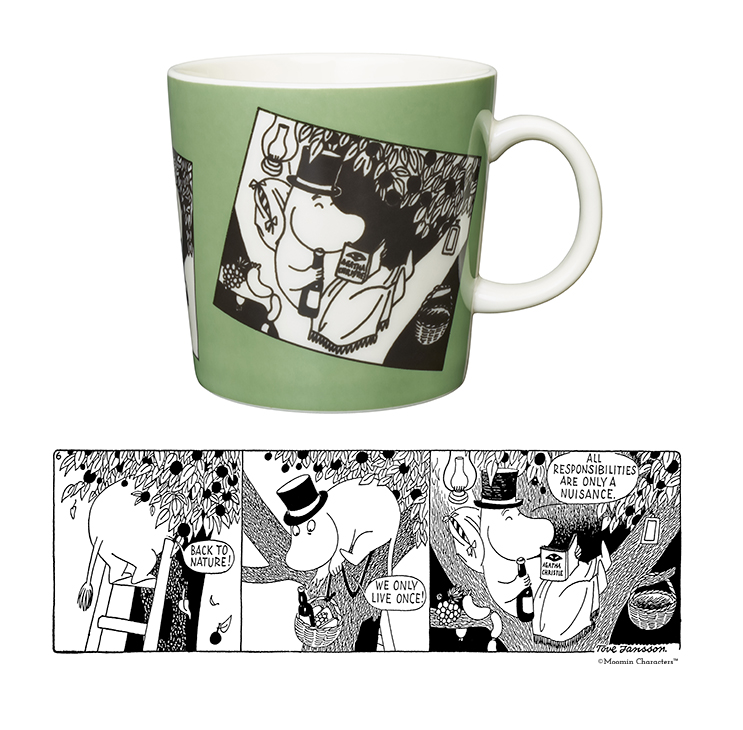 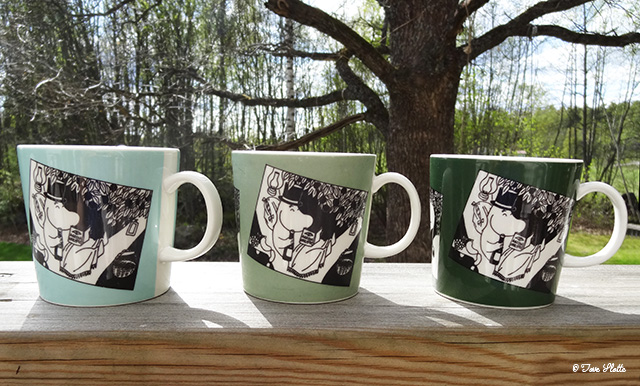 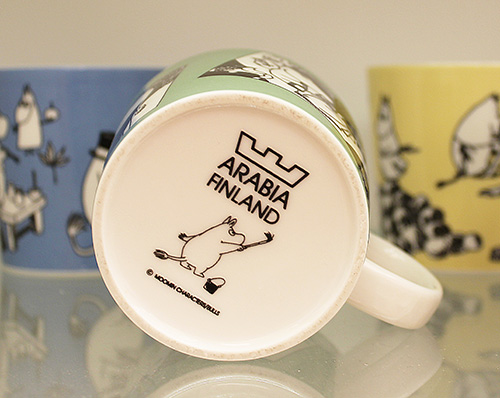 Arabia wanted a stamp on the bottom that would be associated with the Moomins already for the first Moomin mugs of the Teema series. The same image of Moomin with a paint brush has been printed on almost every mug since then, with the exception of a few special stamps.

Mug blue is also known by the name Painting Moomins. One of the original drawings is from the logo Tove Jansson drew for the cover of the comic strip books, the same picture which is still used in the bottom stamp of the Moomin products by Arabia. Other original artwork for the mug is from Tove Jansson’s comic strip #20 Moomin under Sail (1959) the novel Moominpappa at Sea (1965) and comic strip #31 Artists in Moomin Valley (1962), drawn by Tove Jansson’s brother Lars Jansson. 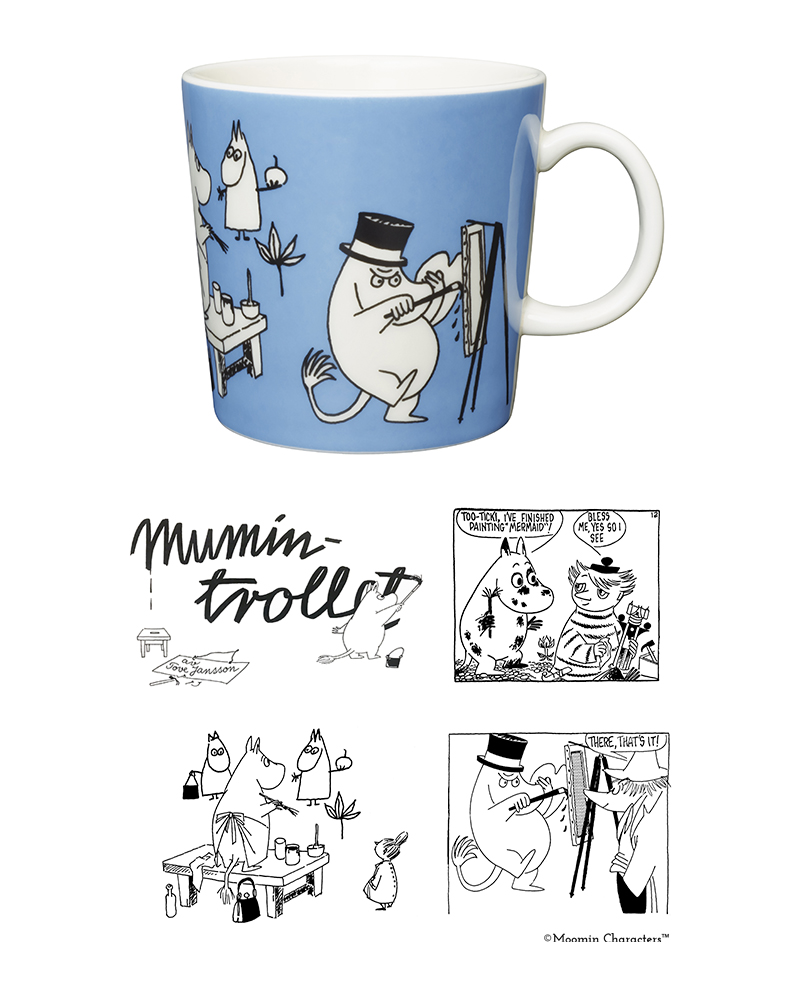 At the beginning of her career, Tove Slotte was very careful with changing Tove Jansson’s original drawings and altering them in order to make them fit the ceramic products. The chosen comic strips didn’t necessarily always contain whole characters, which meant that Slotte sometimes had to alter the images and add her own drawing to make a piece that would work for tableware.

Adopting the style of the first Moomin mug of the Teema series, Mug rose, was launched in 1990. The mug is also known by the name Rose Comic Strip. The original artwork is found in Tove Jansson’s comic strip #9 Moomin Falls in Love (1956). The mugs Green Comic Strip and Rose Comic Strip, which were launched the same year, are to date the only Moomin mugs where a whole comic strip has been used, albeit without speech bubbles. 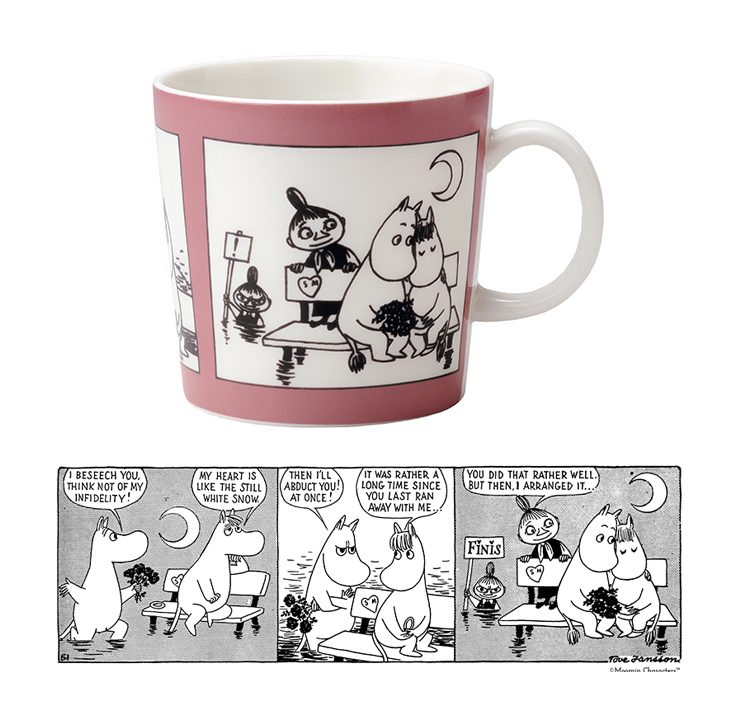 “I remember that I and the marketing director at the time decided that I would try two different styles for the first mugs – one where the comic strip frames would be visible, and another where the characters are taken out standing freely and put on a colourful background”, the mug designer Tove Slotte says.

“Personally I think the blue and light yellow mugs are more balanced than the comic strip mugs. The consumers seemed to agree with me, because the production of the comic strip mugs was discontinued after a few years, and mugs of that style haven’t been produced since then.”

The comic strip mugs have later become highly sought after collector items for which collectors of Moomin mugs have been willing to pay hundreds of euros. Being the first mugs of the collection, and with a different look compared to the others in the collection, the comic strip mugs were produced only between 1990 and 1993. Their rarity is underlined by the fact that the production volumes were very low compared with today’s productions volumes of Moomin mugs.

The fourth Moomin mug is also known by the name Mug yellow, Moominmamma. The original artwork for the mug is from the comic strip #18 Moomin and the Golden Tail (1958) and the novels Moominsummer Madness (1954) and Moominpappa at Sea (1965).

As we wrote in our last blog post about the Moomin mugs, the first mugs came into stores already in the fall of 1990, having been introduced to Tove Jansson and her partner Tuulikki Pietilä only a few months earlier, in the spring the same year. Tove only had one request for amendments, wanting another shade of colour for one of the wall plates. With that one exception, she approved all the products.

“Tove and Tuulikki used the mugs in their summer home on the Klovharun island, which I think is very nice proof that Tove appreciated both the mug design and the quality of Arabia’s products. It is nice to think that Tove herself has had coffee from these first mugs”, Tove Slotte says.