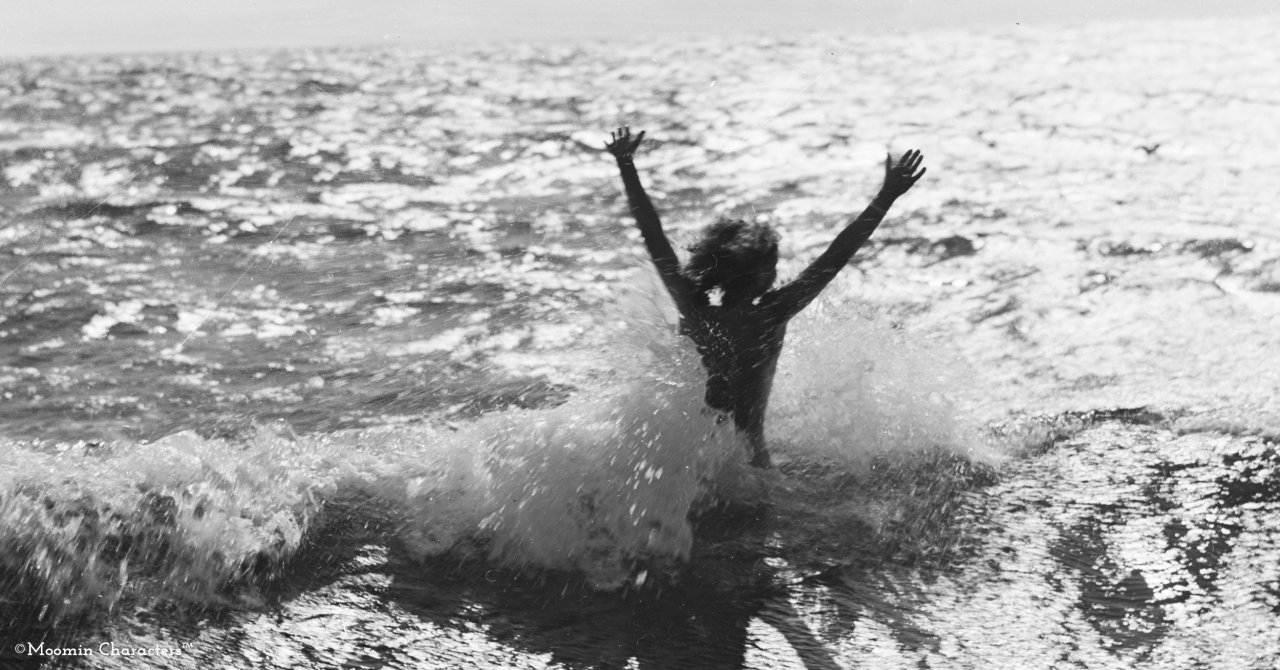 "It's funny about me, Sophia said. I think nice weather gets to be boring.
Do you?" her grandmother said. Then you're just like your grandfather, he liked storms too"
- The Summer book (1972), Tove Jansson

In Tove Jansson’s studio, high up in the tower of a tall apartment building rising above the roofs of Helsinki, one finally understands: the sea and especially its ravaging storms were not only her surrounding environment and random natural phenomenons.

On top of the studio’s workbench there is a shelf with a special collection of books on storms and seaway. The inside of the studio’s bathroom door has been covered in photographs and articles depicting dramatic journeys at sea and spectacular storms – even tornadoes.

For Jansson, the sea and its ravaging storms were an absolutely central source of inspiration; she even surrounded herself with items reminding her of the sea when she was away from its familiar scenery – such as stones and sea shells.

“I suppose I prefer it when a storm is raging.”

In Margareta Strömstedt’s documentary film “Mumin och havet” (Moomin and the sea) from 1968, Tove Jansson is seen telling about how her father Viktor Jansson, often called Faffan, “loved storms”: “He thought that summer was too green, too monotone, too much laziness, nothing happened. And then suddenly the barometer dropped, and he became very ecstatic: running around, measuring the height of the water and pulling up the boats while warning the family – then it broke loose.”

According to Tove Jansson’s niece, Sophia Jansson, Tove’s and her father’s love for storms can be connected to the feeling of liberty: “Some people run out and dance when there’s a storm; for others, storms can even be scary. Tove’s relationship to storms was like her father’s, on whom storms in the Finnish archipelago had a calming effect,” she says. “In a sense, storms are a bigger force when compared to humans, you can even feel undermined by it, but actually the effect can also be quite the opposite: you can relax and let loose since storms are stronger than us humans.”

According to Sophia Jansson, the feelings of adventure found their place here too: storms filled life with content: “anything can happen, the boat can get torn from its mooring, trees can fall. This connected to the thought of adventure – that storms can lead to something unexpected, unplanned.”

Tove’s brother Per Olov Jansson also recalls the family’s summers spent in the Pellinge archipelago and its charming storms. He explains in the book (The Moominworld & Reality – Tove Jansson’s life in pictures): “In the outskirts of the eastern side lay an underwater rock. We used to crawl up on it and then let the waves wash us away. The force could be quite violent. But Tove was never afraid. And she was also completely unafraid when it came to diving from tall cliff sides and springboards.”

“I suppose I prefer it when a storm is raging.”

The storms didn’t only play a part in Tove’s life during the summer and autumn months in the Pellinge archipelago: she documented them in many different ways as part of the literature, illustrations and art that to this day still bring joy to millions of people worldwide. In some books, like in the story “Moomins and the great flood,” the whole world is stormy and it often lays the foundation of adventure, like in the book Moominpappa at Sea.

“I suppose I prefer it when a storm is raging. I’d best be off out there again before the waves get smaller.”

Moomins and the Great Flood 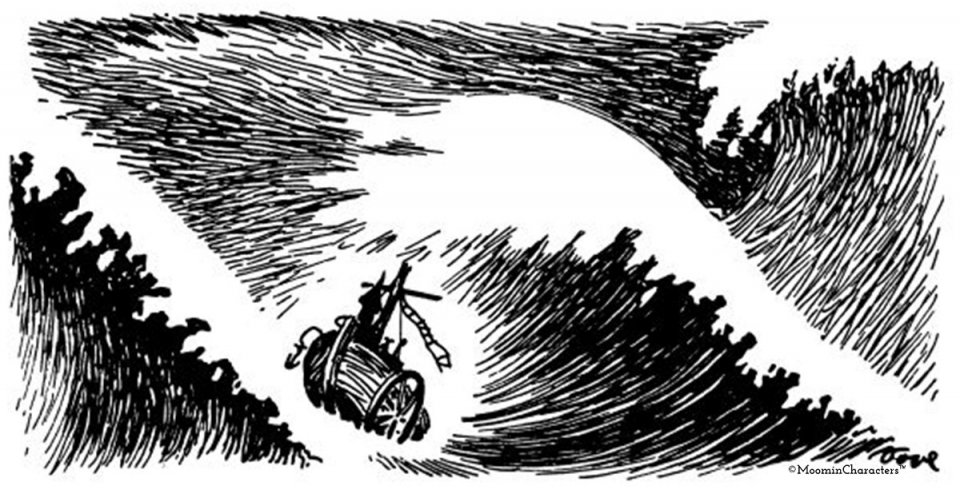 Tove Jansson’s fascination with storms is apparent in her literature:

“And now a new darkness came sweeping over the water – the great storm itself! She ran toward it and was embraced by the wind. She was cold and fiery at the same time, and she shouted loudly, “It’s the wind! It’s the wind!”

The surprising power that storms can possess is cleverly illustrated in the Moomin story “The Fillyjonk who believed in Disasters” where the Fillyjonk is succumbed to a mighty storm that destroys her house and property and puts her in a state of emotional panic, although with a surprising result:

“Now I’ll never be afraid again, she said to herself. Now I’m free. Now I can do anything.”

This can partially be attributed to the visual and the tale-like power of storms. Storms are very visual weather phenomena: the waves are big and foamy, the clouds are dramatic and alive, flaring. There are shapes, colours, sounds.”

“Nevertheless you have to take into consideration that Tove lived her whole life by the sea, so it’s natural that storms were an integral part of her art and literature. In the Moomin stories nature’s culture is strongly present, not e.g city culture. What’s interesting is that Tove in her later literature focused more on people, the relations between them and their communication”, Jansson adds.

“And the last summer something unforgivable happened; I got scared of the sea”

The role that storms played in Tove Jansson’s life slowly changed as she got older. Already being over 70 years old, she and her life partner Tuulikki encountered a storm that, in all its might, even broke their boat Victoria. After that, they had to admit that they could no longer manage to live on their island by themselves. Tove Jansson describes those feelings in the book Notes from an island (1996): “There came a summer where the nets suddenly got hard to retrieve from the sea. The terrain started to resist and became treacherous. – – Things worsened, I for example, did no longer want to climb up on the roof to sweep the chimney.”

It even came to be that her thoughts turned against her: “And during the last summer, something unforgivable happened; I started to fear the sea. The big waves no longer meant adventure, only fear and worry over the boat and all the other boats that travel the sea in bad weather.”

Lastly, Tove and Tuulikki packed all their belongings at once and bid farewell to the island.

Although this may sound sad, the events do uphold beautiful respect towards ageing and moving on with life; like Sophia Jansson adds: “This was actually a very beautiful ending to their summers there. Their time on Klovharun had an obvious and radical end, it wasn’t so that they started going there more and more seldom, being more tired. They admitted reality, accepted it and left. Their story on the island got a clear arc; it was complete. 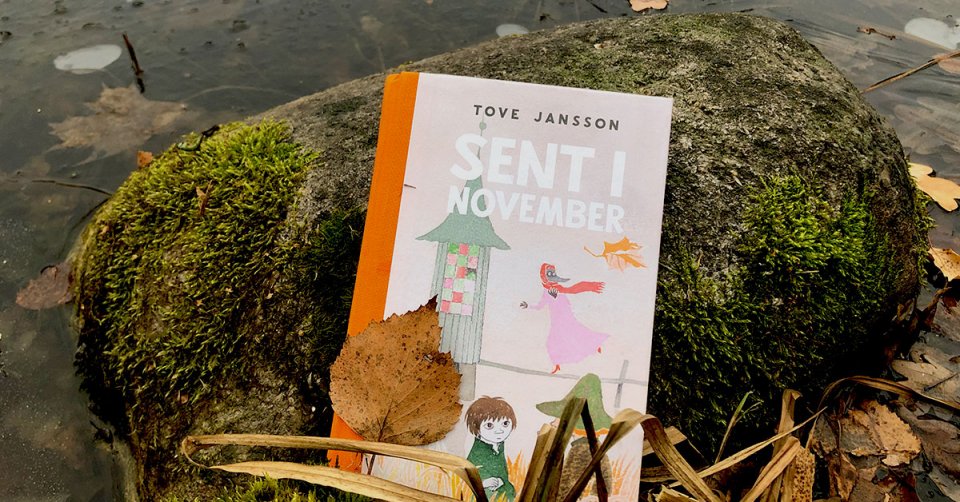 To celebrate fall, let’s dive in to some of Tove Jansson’s enchanting autumn descriptions from the book Moominvalley in November.

The Moomin books are full of very beautiful descriptions of seasons. Here are the top autumn quotes picked from Moomin books by Tove Jansson.