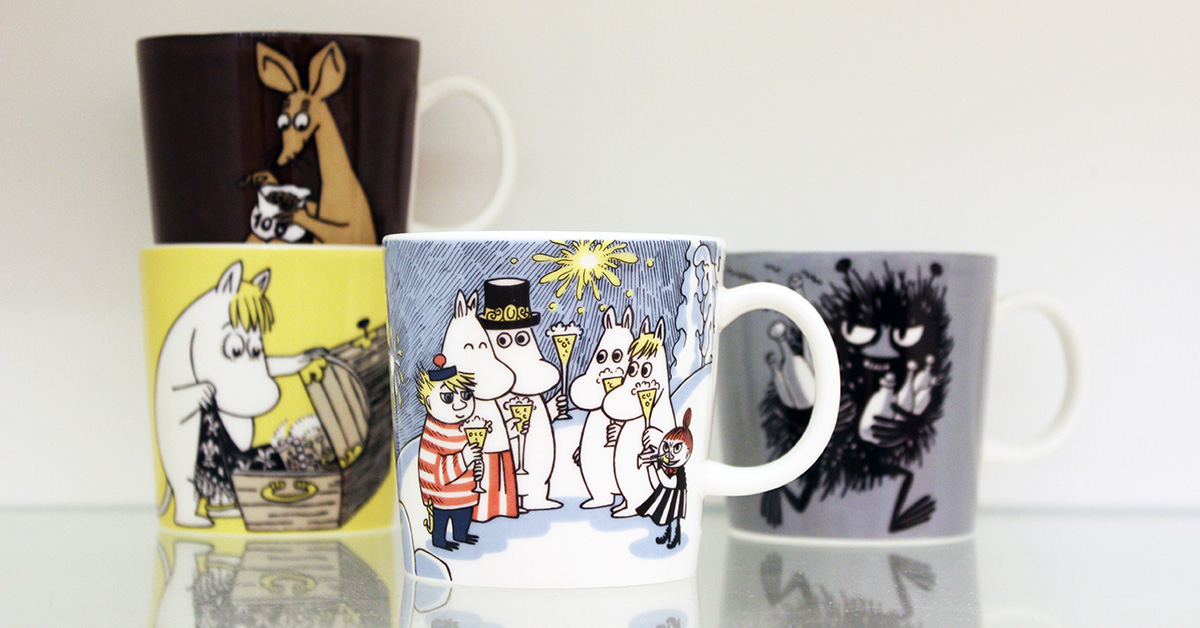 In honor of the millennium, Arabia wanted to release a special mug in the late 1999s. Tove Slotte, specialized in designing Arabia’s Moomin mugs, chose the artwork from three original works: Hemulen from Tove Jansson’s picture book Who will comfort Toffle? (1960), Moominhouse from a Christmas calendar painting (1973) and Moomin family from Tove and Lars Jansson’s comic #20 Moomin under Sail (1959). For the Moomin family image, Tove Slotte only replaced the Nibling with Little My copying only the posture. 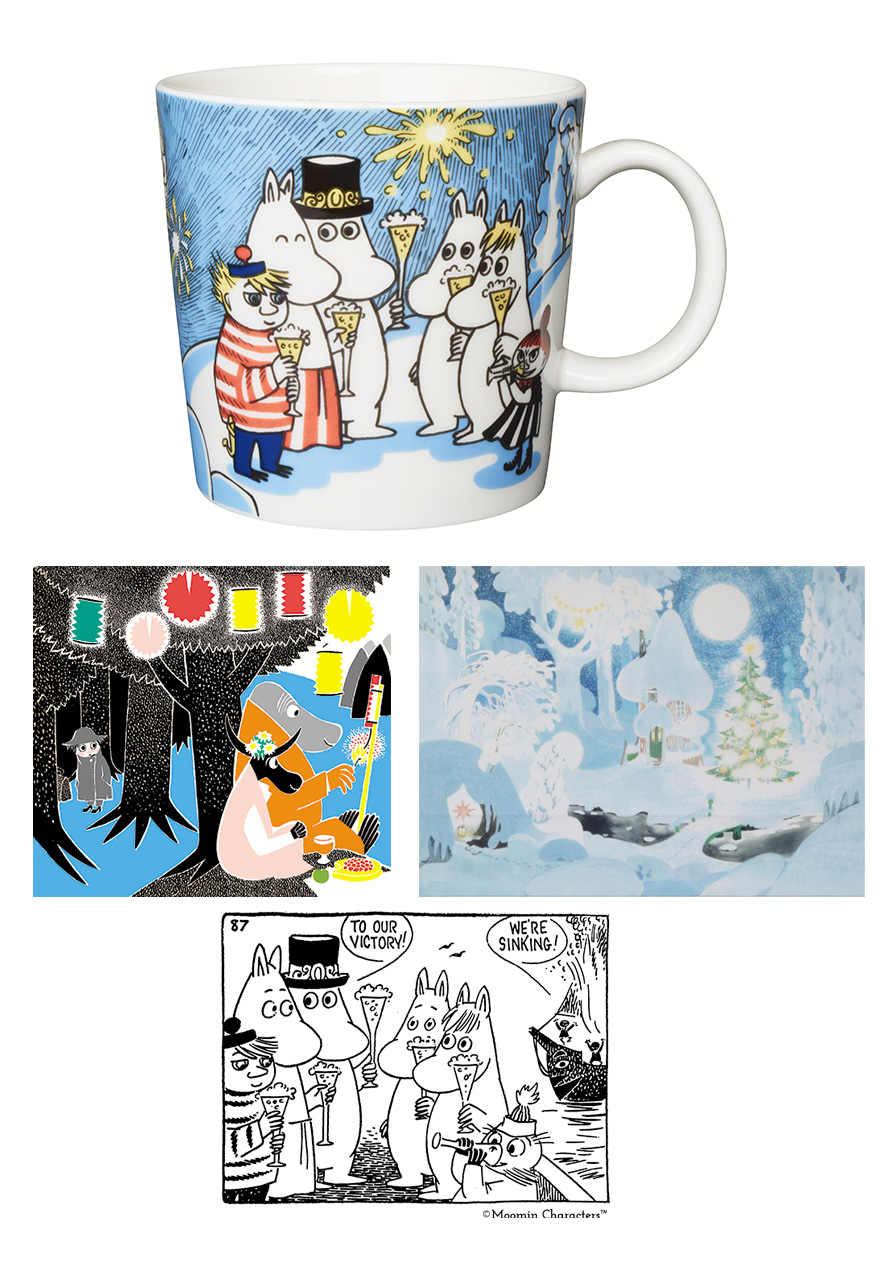 The illustrations of a winter landscape and snowy Moominhouse are from a Christmas calendar Tove Jansson originally created for Swedish television SVT. In December 1973 SVT aired Christmas calendar tv-series Mumindalen (Moominvalley in English, also known as Jul i Mumindalen / Christmas in Moominvalley), written by Tove and Lars Jansson. SVT’s Christmas calendars were also available for purchase as traditional paper calendars with windows to open each day. Instead of a traditional calendar, Moominvalley version illustrated by Tove Jansson had stickers corresponding to each episode of the series. Every day a demonstration was aired to show which sticker to use and where on the calendar to place it. Later the calendars have been made with the same artwork but in a traditional form.

Already for the first Moomin mugs of Teema series Arabia wanted a stamp on the bottom that would be associated with the Moomins. The same image of Moomin with a paint brush has been printed on almost every mug since then, with the exception of a few special stamps. Millennium Moomin mug was the first mug with a special text accompanying the logo. 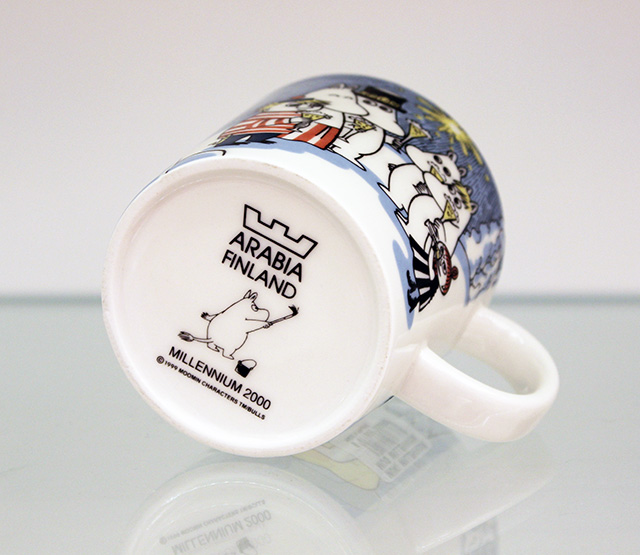 The natural addition for the character mug series was the mug of Moomintroll’s playmate Snorkmaiden. Although Snorkmaiden resembles Moomins in many ways, she belongs to species called Snorks. One special characteristic of Snorks is that they always change color according to their mood.

The illustrations Tove Slotte chose for the mug insightfully depicts the nature of Snorkmaiden, a little vain and flirtatious. The original artwork can be found from Tove and Lars Jansson’s comics #15 Snorkmaiden goes Rococo (1958) and #20 Moomin under Sail (1959). 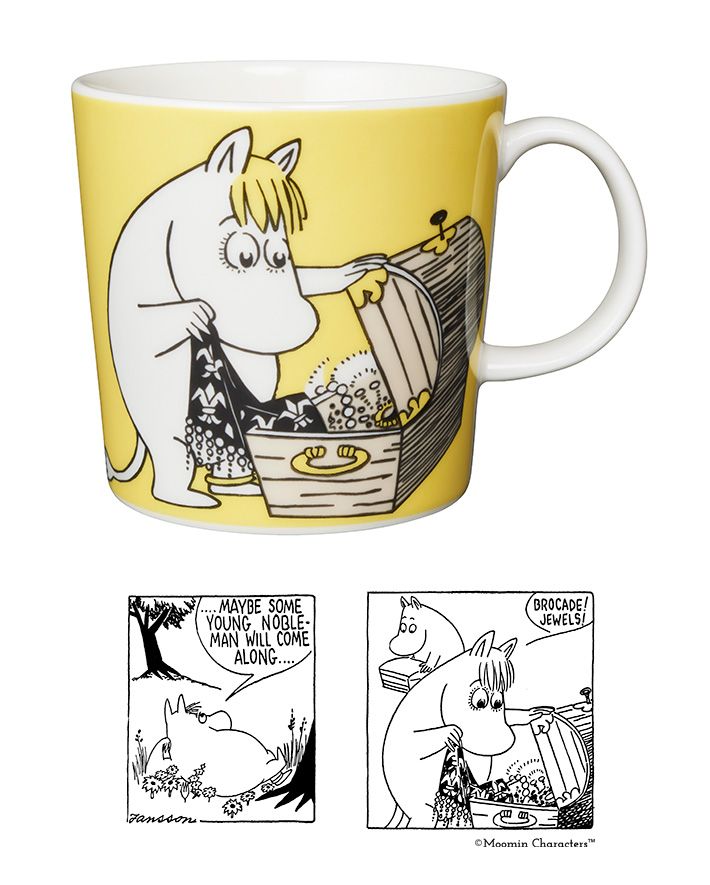 The only character mug from the early 2000s that is still in production is the grey Stinky mug. Illustrations for the mug are selected by Tove Slotte from Tove and Lars Jansson’s comic #17 Moomin and the Comet (1958). Stinky, alongside with the Inspector, are the only characters in Arabia’s character mug series that appear only in comics and not in Tove Jansson’s novels. 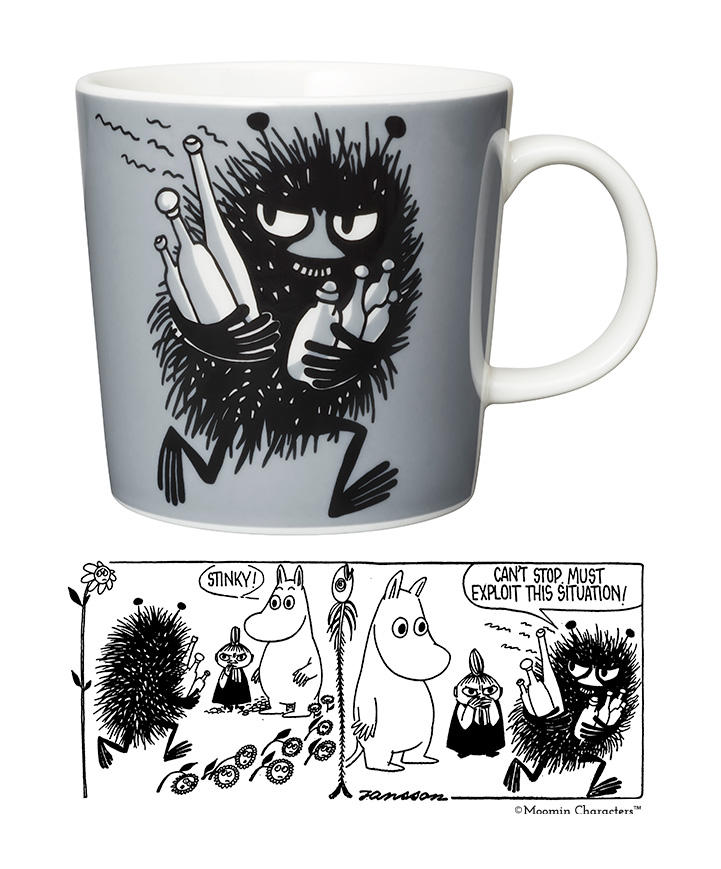 The illustrations for the first Sniff mug are from Tove Jansson’s Moomin novel Comet in Moominland (1946) and a comic strip #2 Moomin and Family Life (1955). Just like for the other characters, Tove Slotte has succeeded in choosing great illustrations for Sniff too, clearly reflecting his personality. For example, Sniff loves all valuable things and gets excited whenever he encounters some. Shiny, sparkly objects, in particular, fascinate him.