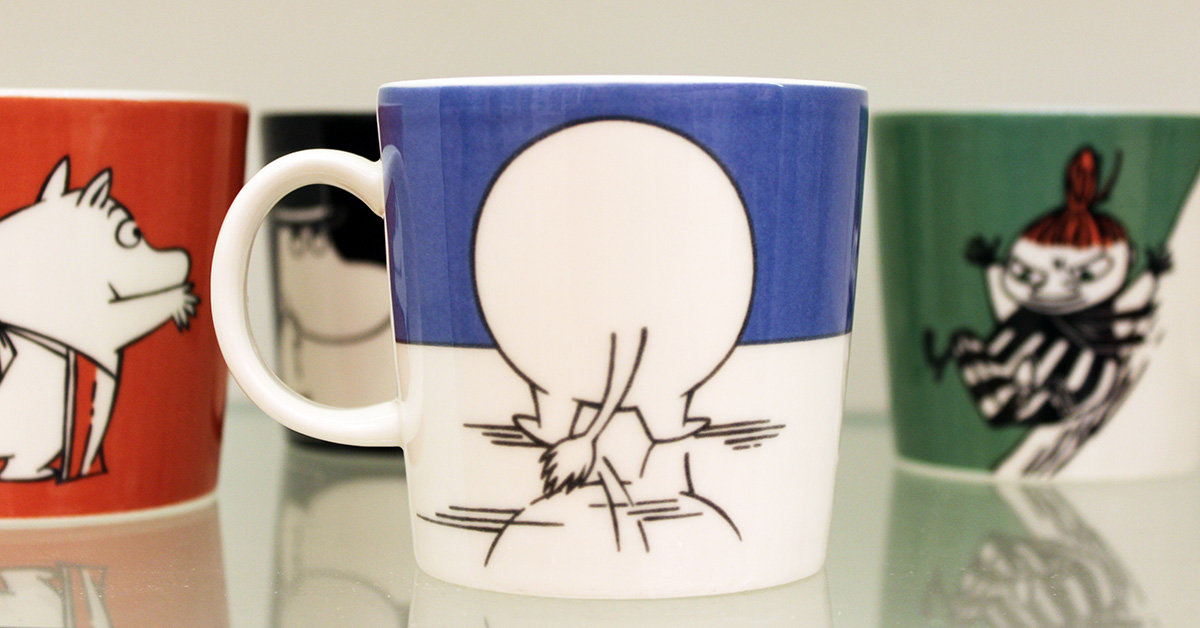 Soon after the successful Moomin mug launch of the early 90’s, Arabia got the idea of creating a new series of character mugs so that the mugs wouldn’t look too similar. The series of mugs with characters shown clearly from the front and back started naturally with the Moomin family; Moominpappa, Moominmamma, and Moomintroll alongside with the adopted Little My.

The mug designer Tove Slotte chose the black background for Moominpappa as it matched his black top hat perfectly. The mug was in production until 2013, and during the years claimed its place as the favorite of many fathers.

The two original pictures of the mug Moominpappa thinking (also known as Moominpappa in his thoughts) are both selected from Tove Jansson’s comic #12 Moomin and the Sea (1957). 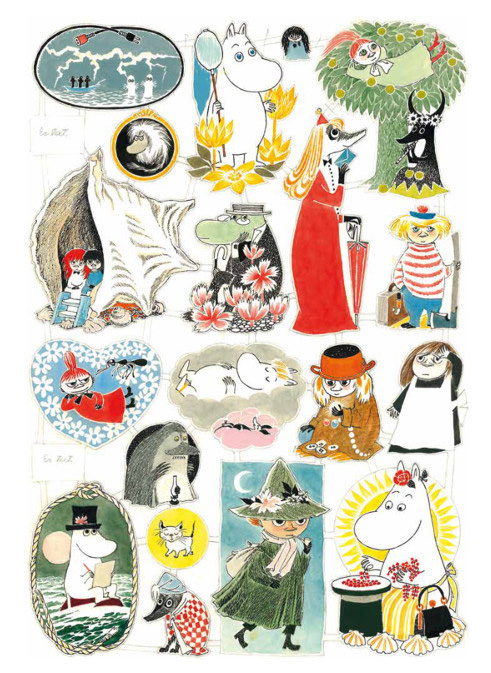 During 1999, Arabia also launched a mug called Moomintroll on ice, which was taken out of production one year before Moominmamma and Moominpappa. Tove Slotte, a decorative illustrator at Arabia, chose Moomintroll seen from the front from Tove Jansson’s comic #5 Moomin’s Winter Follies (1955).

The illustration of Moomintroll from the back is Slotte’s delicately adapted version of an image from Tove Jansson’s first comic #1 Moomin and the Brigands (1954-1955). Since the very first Moomin comic panel, the backside of the Moomins were often used both in Tove and later her brother Lars Jansson’s Moomin comics.

Originally, the mug Little My sliding was in production during 1999-2007, but was reproduced in 2011 when the Finnish grocery store chain Citymarket took the mug into its selection to celebrate the chain’s anniversary.

Arabia’s Moomin mugs, like every single other Moomin product in the market, have passed through Moomin Characters’ approval process for Moomin copyright. Founded by Tove and Lars Jansson already in the 1950’s to look after Tove Jansson’s artistic legacy, Moomin Characters Ltd is the official copyright holder of the Moomin characters.

Tove Slotte, who has been designing Arabia’s Moomin mugs since the beginning, got the approval for the first Moomin mugs from Tove Jansson herself by presenting the mugs face-to-face to her. Nowadays Moomin Characters’ Approval Department approves the products digitally.

“The approval process has, of course, changed during the decades. Tove Jansson took a look at the fired mug designs and Lars Jansson gave his opinions already at the designing phase by faxing. When Sophia Jansson was responsible for the approvals she continued the way her father had started, commenting either by faxing or over phone” Tove Slotte remembers.

The picture below shows Tove Slotte’s first thoughts from the late 90’s of modernizing the mug selection with the character mugs.

Tove Slotte recalls: “At that time I thought that the Moomins were already so well known that it would be enough to show only parts of the character, such as a topknot or eyes and nose. I simply wanted to create a modern look for the new character mugs to distinguish the new set from the older ones, which had already started repeating themselves.”

After the idea was presented to Moomin Characters, Slotte got clear instructions that the Moomins should not be cropped nor their tails cut, and that she should edit the mug designs to be approved for production.

Today, Slotte feels that her thoughts about Arabia’s Moomin designs are clearly in-line with the Moomin Characters Ltd: “Nowadays, we are mainly discussing details so that we can get everything drawn right. The common vision maybe arises from the fact that I have grown up here in Finland where Tove Jansson created the Moomins. For me, the lifestyle, views, and behavior of the Moomins, as well as the surrounding nature with its archipelago and forests, are very familiar. I strongly appreciate that, together with Moomin Characters, we want to respects Tove Jansson’s original artwork as much as possible.”

The most popular Moomin mug ever – the historyof Moomin mugs by Arabia, part 3