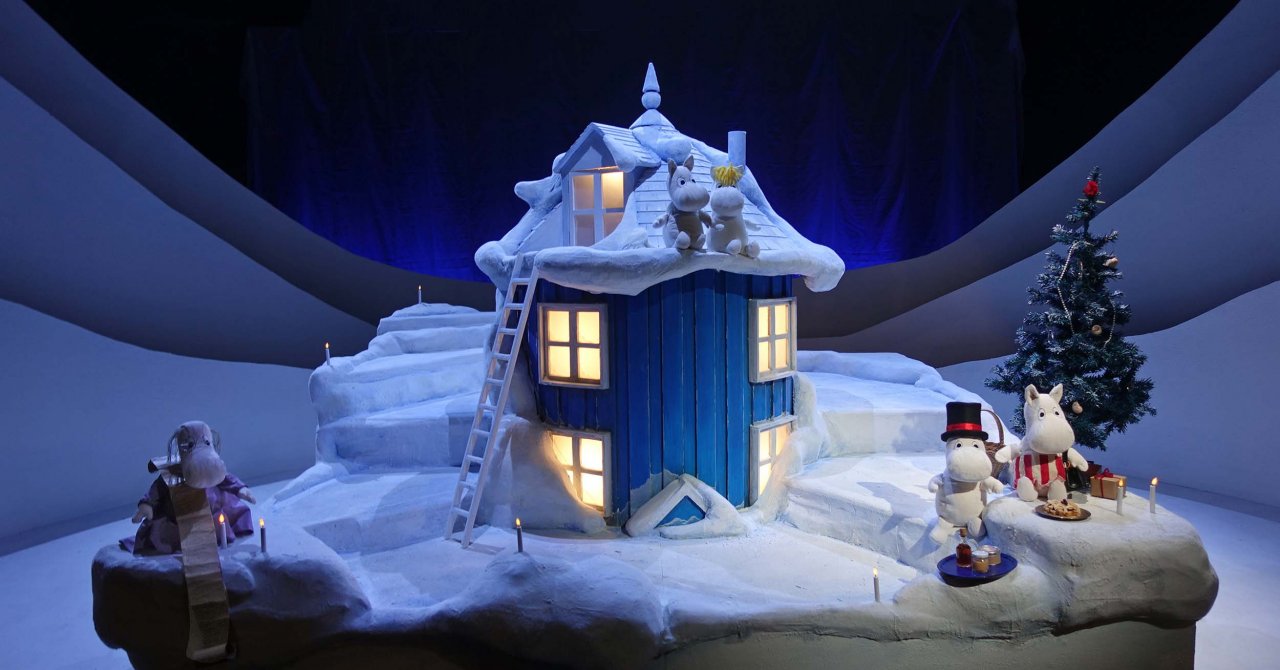 Every year, many charming Moomin theatre plays are staged around the world - here we list the places where you can see Moomin on the theatre stage at the moment!

We present some Moomin plays more in-depth in separate articles on Moomin.com, here is a short summery per country.

In Marionetteatern’s interpretation of Tove Jansson’s short story The Fir Tree (Granen), the audience meets the Moomintroll and his friends who accidentally wake up from hibernation and learn about a mysterious phenomenon called “Christmas”.

The acclaimed show premiered in 2021 and is now being staged again for the 2022 Christmas season.

Moomintroll is awakened from his long winter sleep to a bustling Moominvalley. Something called Christmas is apparently coming already the same evening! And the mysterious Christmas does not seem pleasant at all.

With puppets, shadow plays and newly written live music, we get to follow the Moomins’ first tentative steps in the snow. What exactly is Christmas? And why is everyone running around like crazy? Marionetteatern’s interpretation of Tove Jansson’s The Fir Tree is a visually strong representation of what’s truly important.

Granen is a family show from 4 years.

Strictly speaking, the Summer Book is not a Moomin play, but since it is based on a book written by Tove Jansson, it may still interest Moomin fans.

The Summer Book is one of the greatest Finnish summer classics. It consists of several small stories depicting the growing friendship between a very old and a very young person. The little girl Sophia, who is beginning her walk of life, has just experienced death through the passing of her mother. At the same time, the elderly grandmother is at the end of her life, sensing the present of death. Sophia and her grandmother look at life in different ways. One of them must be able to live and the other must be able to die.

Marika Lagercrantz and Matilda Ragnerstam take on the roles of little Sophia and her grandmother who get to know each other during a summer together on an archipelago island.

The story has biographical elements from Tove Jansson’s own life and was published in 1972. In connection with the book’s 50th anniversary, it is now staged at Kulturhuset Stadsteatern.

A beautiful and atmospheric Christmas show for everyone aged 5 and up – based on an adaptation of Tove Jansson’s short story The Fir Tree. After each performance, there is an opportunity to ask the actors questions and check out the puppets.

When the Moomin family is awakened from their sweet winter sleep by Hemulen amid much commotion, they wake up to a world unlike anything they’ve seen before. Moominvalley is covered in a sparkling white, thick and icy layer of snow – a natural phenomenon completely unknown to the Moomins. The Moomins’ friends in the valley don’t have time to explain what’s going on. They are busy getting ready for Christmas. What Christmas is is a mystery to the Moomins. But everyone’s preoccupation with getting ready before it arrives seems worrisome. The Moomin family tries very hard to be like the others so as not to incur the wrath of Christmas or worse…

Moominvalley and its cast of characters have been portrayed on stage several times before, but never in this way. Tove Jansson’s Moomin comic comes to life on stage for the first time at Lilla Teatern in the play Kris och katastrof i Mumindalen  (Crisis and Disaster in Moominvalley).

The play, which has received rave reviews, is the first theatrical production based on Tove Jansson’s Moomin comic strips. Directed by Lilla Teatern’s artistic director Jakob Höglund with a script by Annina Enckell.

Below you can see a mini-documentary about the creation of the play.

The performance reminds the audience of all the adventures the inhabitants of this special valley have. It would probably be a perfectly normal day of play outside Moominhouse, if it weren’t for a certain mysterious hat that fell from the sky… or out of nowhere. 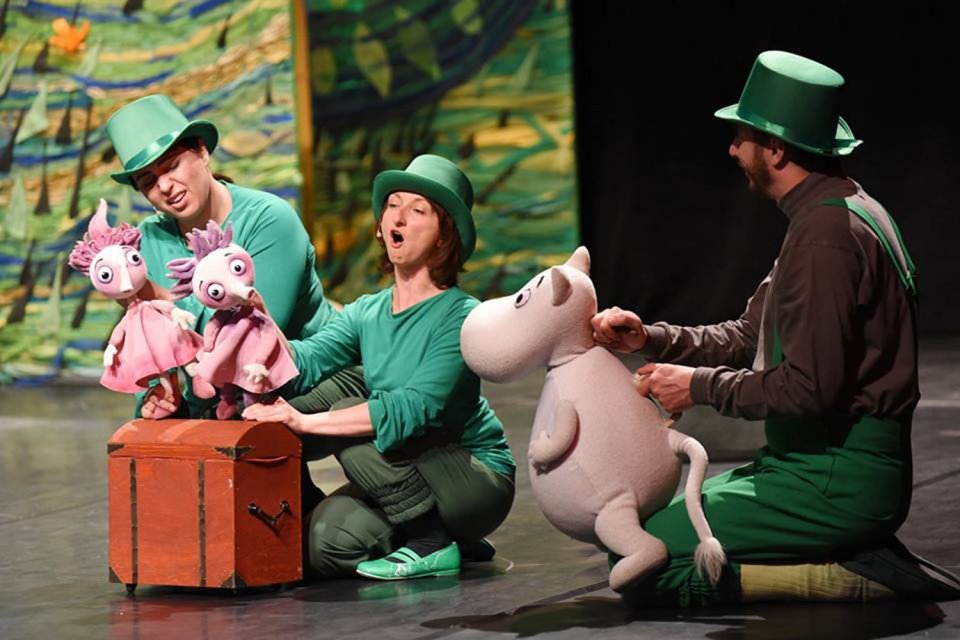 The everyday problems of the Moomins are very close to children and their parents. The simply constructed world, presented with the use of many classic puppet theatre techniques, is easy to realte to for the youngest children. The show includes numerous songs and a colourful stage design.

“A theatre is the most important sort of house in the world, because that’s where people are shown what they could be if they wanted, and what they’d like to be if they dared to and what they really are”, says Emma the Stage Rat, as she is trying to describe the magic of the thatre to the Moomin family, who have never heard of the concept.

Moominsummer Madness is a story with many references to William Shakespeare’s A Midsummer Night’s Dream. Midsummer night becomes the background to a story about longing, attachment, care and sleep. This is a time of magic and miracles casting a wonderful spell over Moominvalley.

The main image of this article is from the play Granen by Marionetteatern, photographer Lasse Frank. 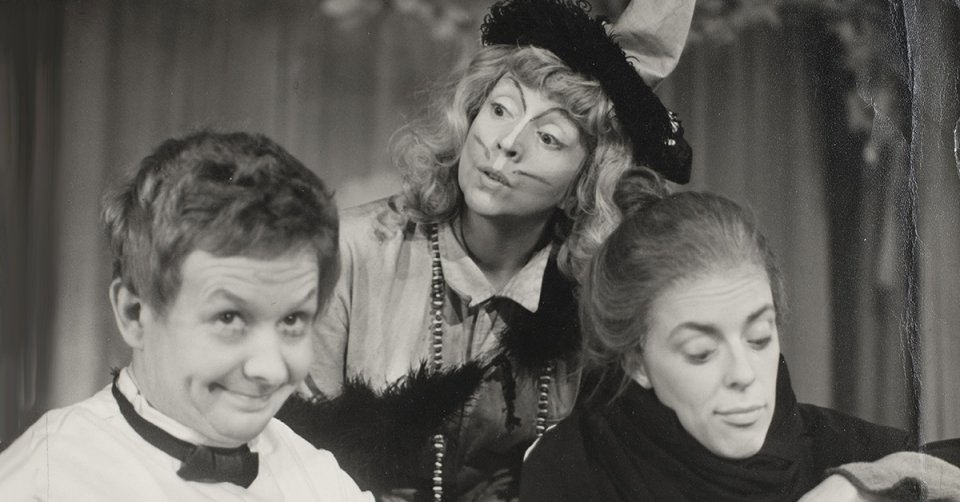 Moomins at the theatre: Lilla Teatern 1958 – Troll i kulisserna

Moomins have a long history with the theatre: Troll i kulisserna is the second Moomin theatre play based on Moominsummer Madness. 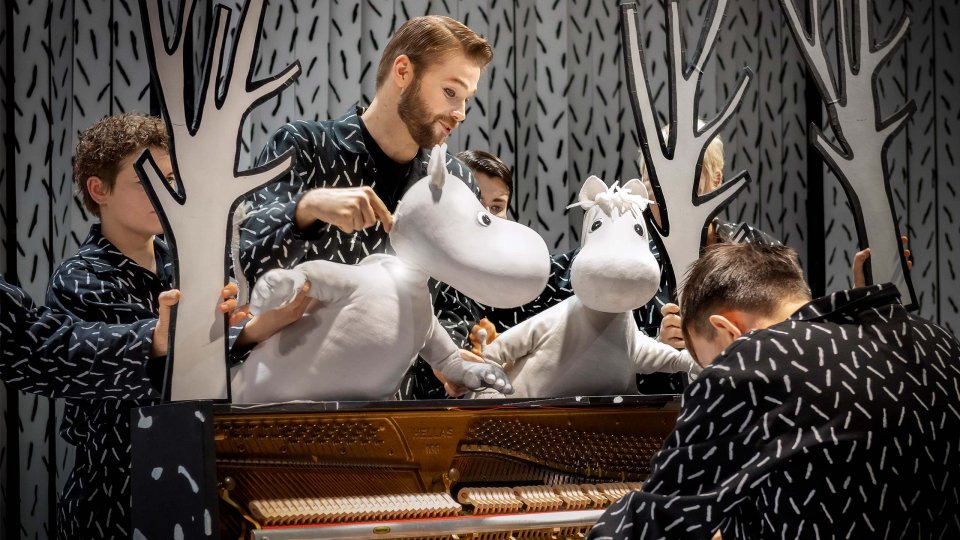 Follow the rehearsals and see some of the 100 puppets used in first theatre play based on the Moomin comics in our mini-documentary!

In the beginning of June a part of Moominvalley will be presented at the Theatre Museum in Helsinki, Finland when… 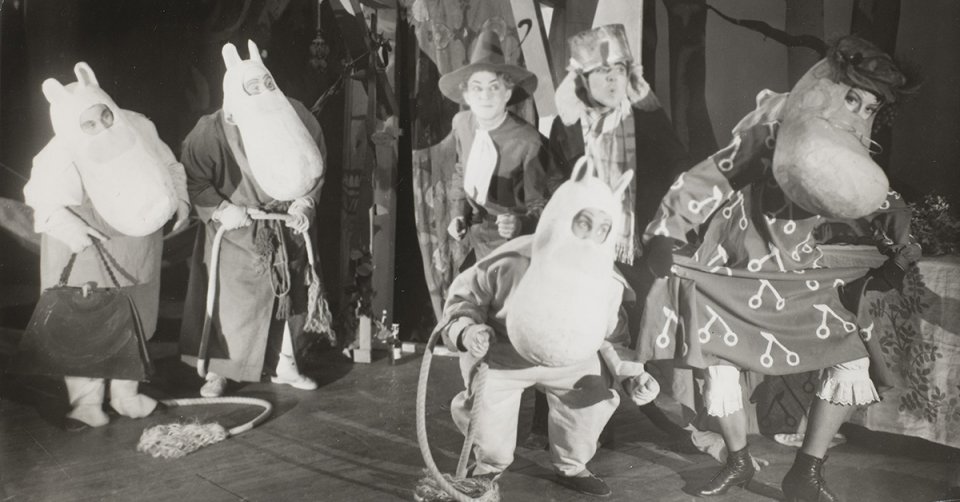 In early June, an exhibition Moomins at the theatre opened at the Theatre Museum in Helsinki presenting the first theatre versions of the… 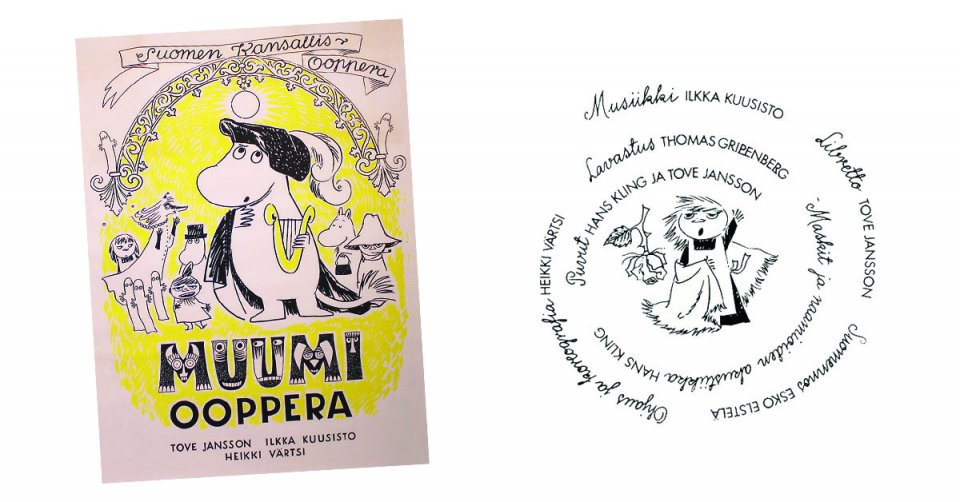 The third part of the Moomins at the theatre stories will focus on the Finnish National Operas Moomin Opera from 1974. Earlier we… 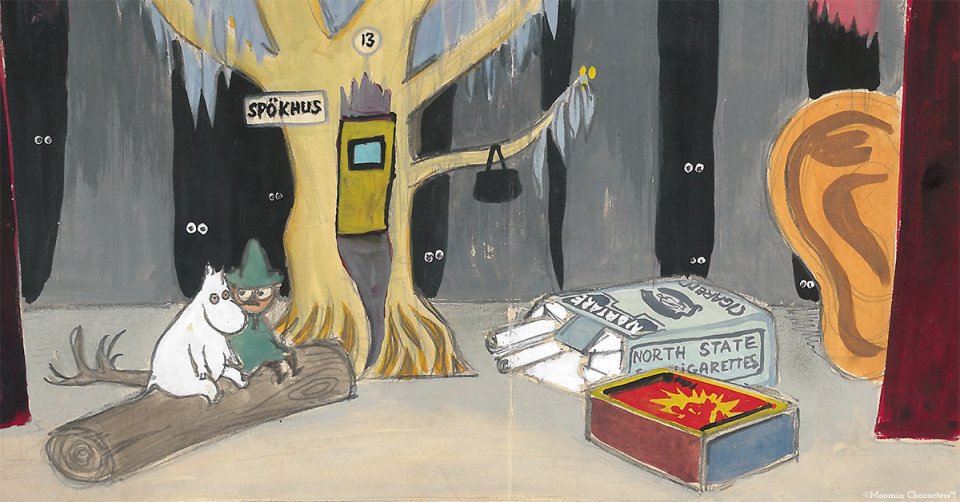 Archive treasures: The original set design sketch for the “Comet in Moominland” play by Tove Jansson

Did you know Tove Jansson created beautiful Comet in Moominland set design sketches for the first Moomin theater play? Take a look at them!