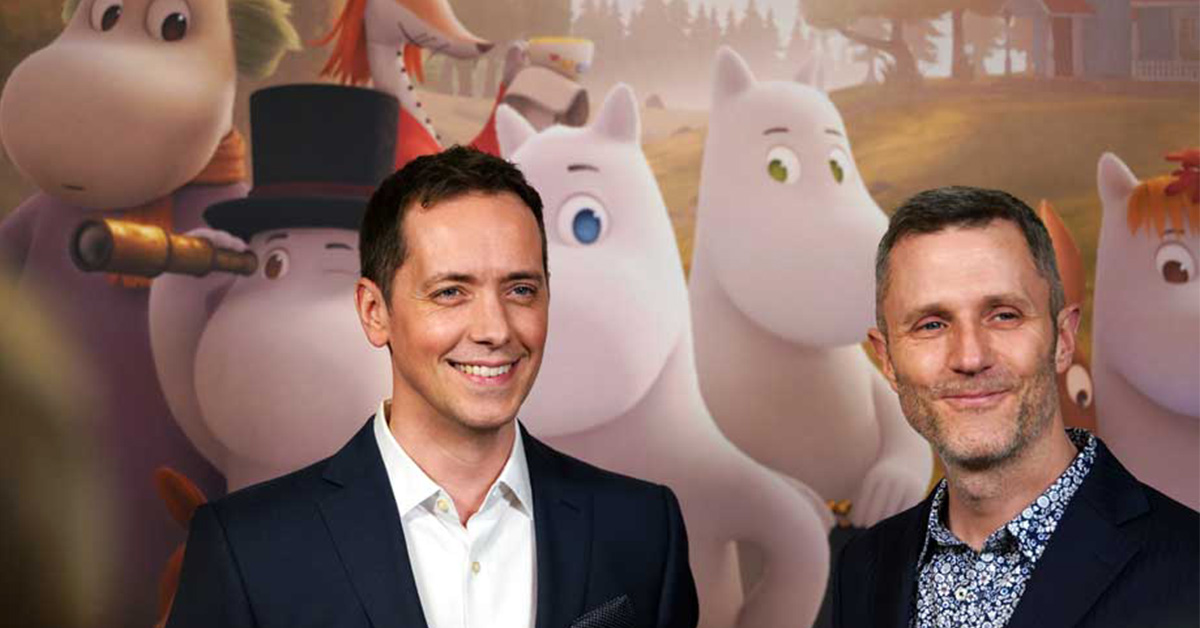 The beloved Moomin stories created by the Finnish author and artist Tove Jansson have been re-created into a new animation series, “Moominvalley”, to introduce the stories to new generations as well. Moomin.com sat down with Moominvalley screenwriters Mark Huckerby and Nick Ostler to find out what it has been like for them to write such a long-awaited animation series as Moominvalley, and what the process has been like.

What was the guiding principle of the screenwriting process?

Nick Ostler: “The guiding principle was always to be true to the themes of the stories, to the meanings behind them, to make sure we weren’t changing those, even if we had to alter certain things to make it work on TV. To make sure that the meanings and the theme were consistent.”

“The series is very closely based on the original novels, that was always the plan. But we have cherry-picked ideas, scenes or moments from other places, such as the comic strips.”

“Of course, she (Tove) retold some of the same stories in different forms over the years, which was also quite useful for us to see because we are adapting it into a version which is recognizable and close to the originals. But we’ll have some different things for the TV form.”

How did you come up with the storyline for the first season?

Mark Huckerby: “We started to crack the code of what we should be doing when we thought it should be a seasonal show. It should be starting in spring and going through telling the year in the life of Moomintroll. Once we had anchored it in the calendar, that gave us an arch because we started to think that this is the year of Moomintroll growing up from when he wakes in spring to Moominvalley in midwinter.

Nick Ostler:  “It’s really fun to play with as writers when you have a character who’s halfway between childhood and adulthood, moving back and forth. It’s not a straight line when you grow up, you might advance quickly in one adventure or one day and then revert back to being a bit younger.”

Mark Huckerby: “He wants the love of his mother but he also wants to go out and experience adventures. But then he also wants to come home again. Which is very sweet and funny and real. Push and pull, all the time, which is great for a sort of character tension and drama. And comedy.”

“Moominpappa is a kind of dominating character, and very funny and loving. Moomintroll is always trying to define his own space from Moominpappa. Because, well he’s Moominpappa! He (Moomintroll) wants to be his own character.”

What has it been like to work on the script?

Nick Ostler: “Seeing something where you can have a completely good-hearted hero like Moomintroll at the centre of it, you don’t need to do anything cynical or too dark. You can be very positive. That’s not an opportunity you get much these day. That was very inspiring for us.”

See what else Mark and Nick told us at Moomin.com about the screenwriting process: