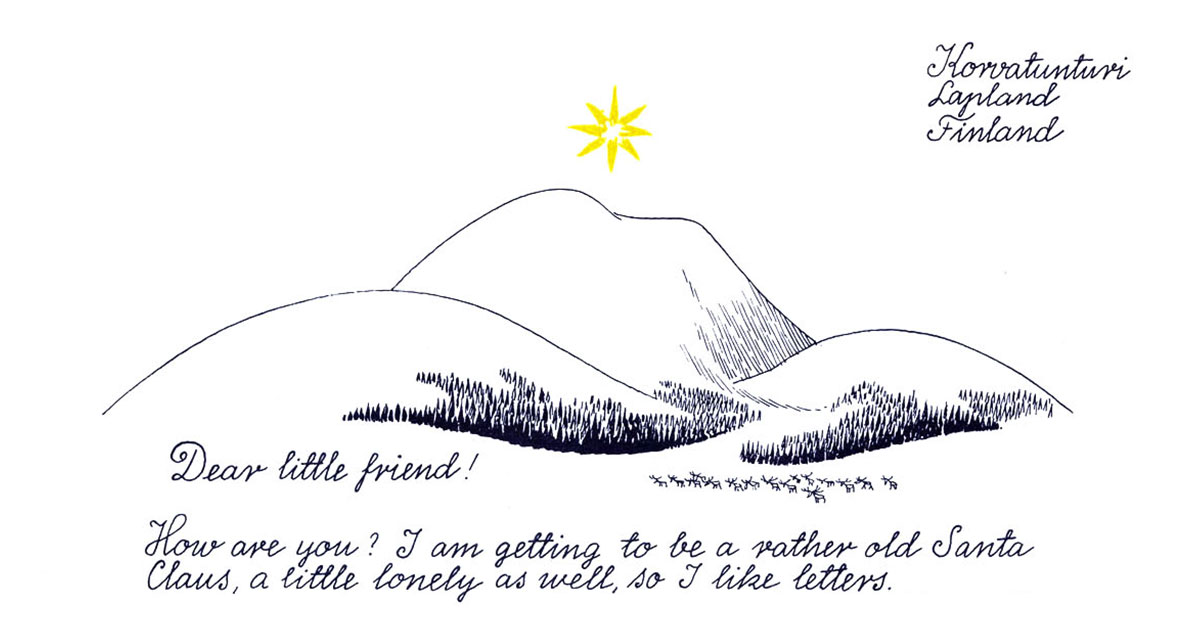 Back in 1963, Tove Jansson sat down and composed a beautiful Christmas letter illustrations and all. It was put together as if it was written by Santa Claus himself and in the letter he speaks about his solitude, Christmas gift plans and his desire for peace for everyone. The Christmas letter was originally ordered by the Finnish newspaper affairs office as a reply to all the letters that children around the world were writing to Santa Claus in Finland. Read the original never before published letter or our transcription below.

The image of the reindeer was later featured on the Winter Forest Moomin mug in 2012.

We wish you a very relaxing holiday and a happy Christmas. 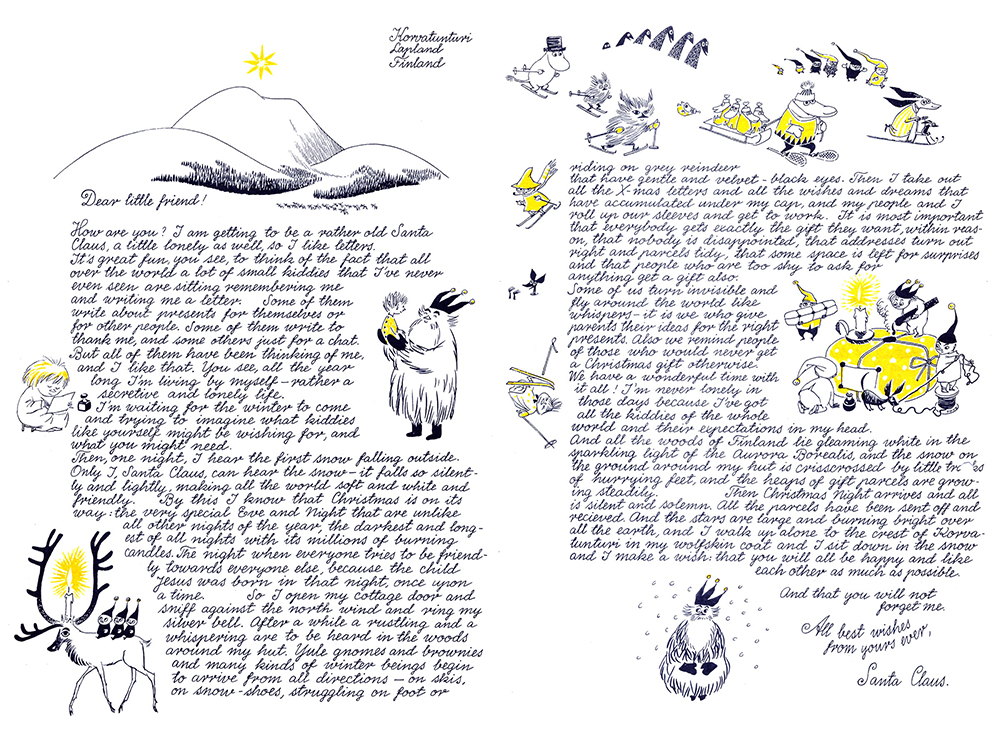 How are you? I’m getting to be a rather old Santa Claus. A little lonely as well so I like letters. It’s great fun you see to think of the fact that all over the world a lot of small kiddies that I’ve never seen are sitting remembering me and writing me letters. Some of them write about presents for themselves or for other people. Some of them write to thank me and some other just for a chat. But all of them have been thinking about me and I like that. You see, all the year long I’m living by myself – rather a secretive and lonely life.

Then, one night I hear that the first snow falling outside. Only I, Santa Claus can hear the snow – it falls so silently and lightly, making all the world soft and white and friendly. By this I know that Christmas is on its way: the very special Eve and Night that are unlike all other nights of the year, the darkest and longest of all nights with its millions of burning candles. The night when everyone tries to be friendly towards everyone else, because the child Jesus was born in that night, once upon a time.

So I open my cottage door and sniff against the north wind and ring my silver bell. After a while a rustling and a whispering are to be heard in the woods around my hut. Yule gnomes and brownies and many kinds of winter beings begin to arrive from all directions – on skis, on snow-shoes, struggling on foot or riding on grey reindeer that have gentle and velvet-black eyes. Then I take out all the X-mas letters and all the wishes and dreams that have accumulated under my cap, and my people and I roll up pur sleeves and get to work.

It is most important that everybody gets exactly the gift they want, within reason, that nobody is disappointed, that addresses turn out right and parcels tidy, that some space is left for surprises and that people who are too shy to ask for anything get a gift also.

Some of us turn up invisible and fly around the world like whispers – it is we who give parents their ideas for the right presents. Also we remind people of those who would never get a Christmas gift otherwise. We have a wonderful time it all! I’m never lonely in those days because I’ve got all the kiddies of the whole world and their expectations in my head.

And all the woods of Finland lie gleaming white in the sparkling light of the Aurora Borealis and the snow on the ground around my hut is crisscrossed by little tracks of hurrying feet, and the heaps of gift parcels are growing steadily. The Christmas night arrives and all is silent and solemn. All the parcels have been sent off and received. And the stars are large and burning bright over the earth, and I walk up alone to the crest of Korvatunturi in my wolfskin coat and I sit down in the snow and I make a wish: that you will all be happy and like each other as much as possible.

And that you will not forget me.

All best wishes from yours ever,