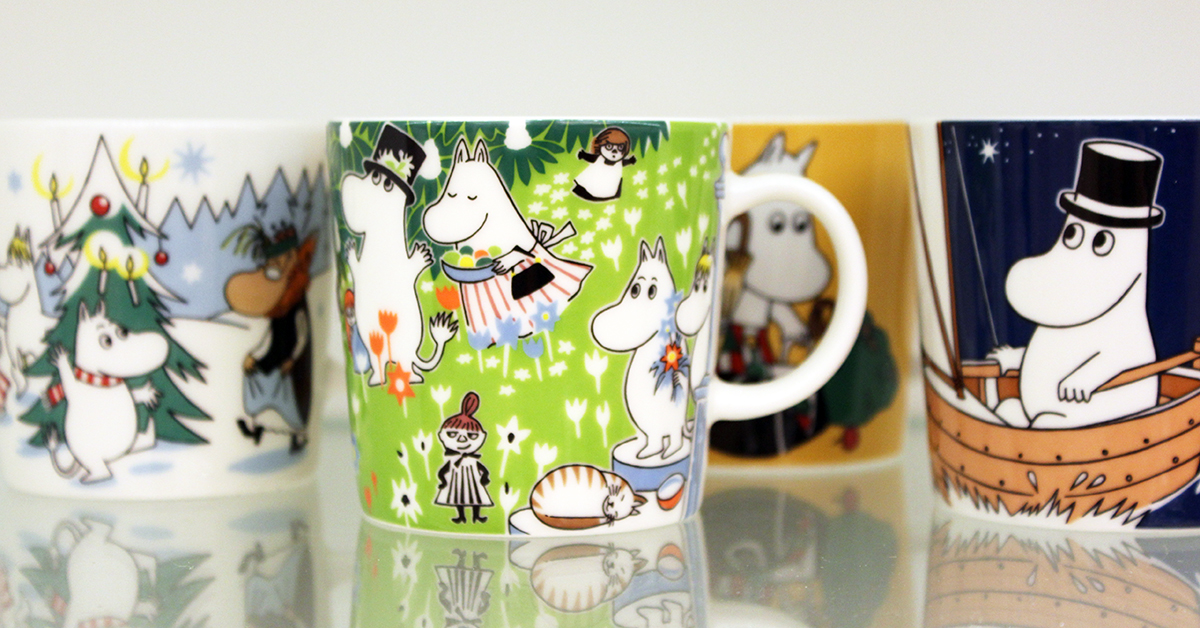 The Moomin winter mug for 2013 was the first winter mug in history which was released together with a bowl. As in a previous couple of years, during the Christmas season 2013, the mini Moomin mugs were also released featuring the Under the tree illustration.

Mug’s artwork is mainly selected from Tove Jansson’s brother Lars Jansson’s comic #41 Moomin and Aunt Jane (1964). Moominmamma, Snorkmaiden and Moomintroll are from Jansson’s siblings’ comic #16 Conscientous Moomin (1958). The comics that the siblings wrote together were always illustrated by Tove. 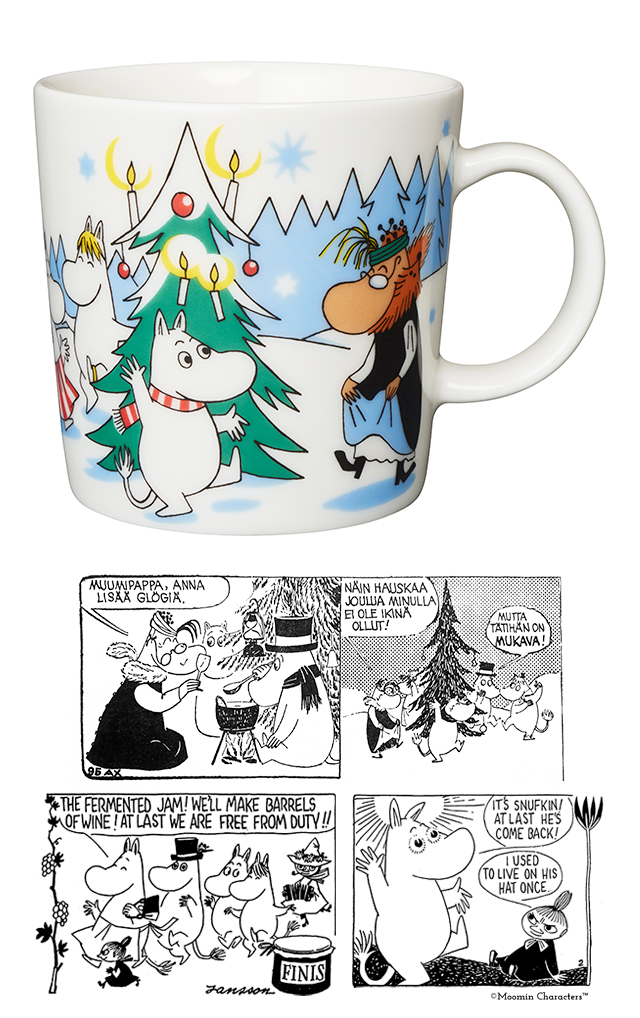 The year 2014 marked the 100th anniversary of the birth of Moomin creator Tove Jansson (1914–2001). The year was named as the beloved artist’s jubilee year, and it was celebrated in different ways around the world throughout the year. To celebrate Tove, Arabia launched jubilee series, which included a special Moomin mug and three different sized jars.

Designer Tove Slotte said: “Thingummy and Bob is my own composition, partly from Dangerous Journey and the book Finn Family Moomintroll. The color of the characters is the same as I used on the Moomin mug Thingummy and Bob in 2005.”

Mymble and Fillyjonk and their pose with the flowers are from Tove Jansson’s Easter postcard from the 1940s. Snufkin’s model is originally from Tove Jansson’s comic #18 Moomin and the Golden Tail (1958). Snorkmaiden is Slotte’s own design based on generally known pictures of the beloved character. 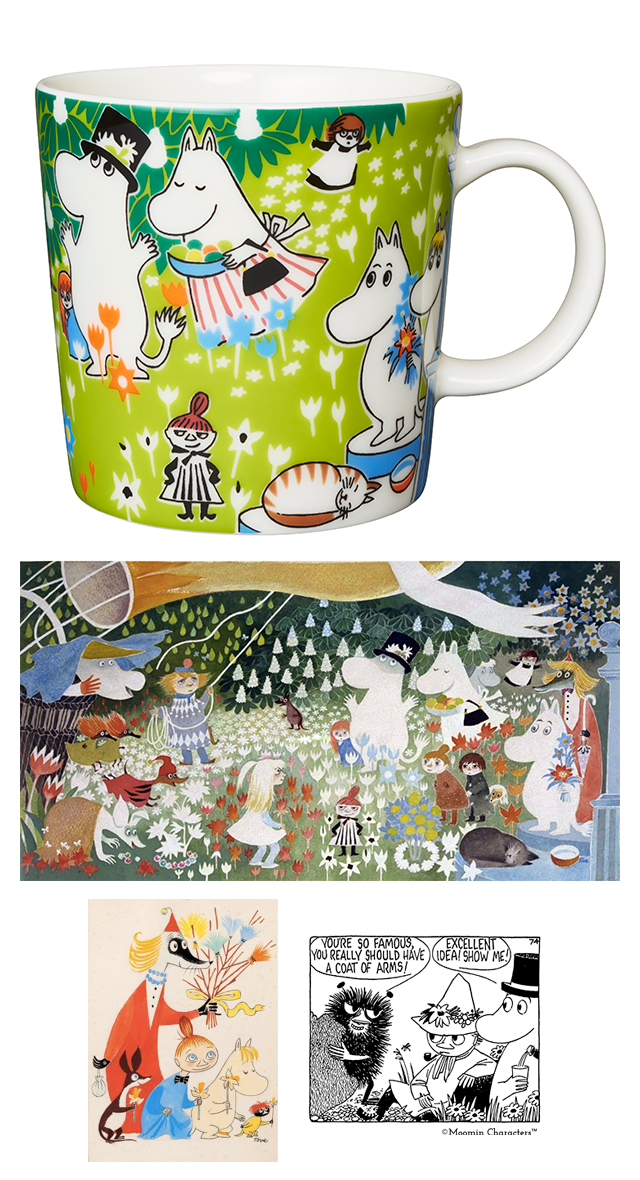 The main illustration and the theme of the jubilee mug is a moment from Moomins’ Garden Party. In the story, Susanna loses her glasses but finds new ones to replace them. Through these new glasses, the world looks totally different.

The glasses are an essential part of the Moomin story and therefore as a specialty of the jubilee Moomin mug, every sixth mug was decorated with a pair of glasses on the inside leading to the wild adventures. Adventures became a reality for many of the Moomin mug collectors when mugs with the glasses gained unexpected popularity and were very difficult to find from the shops at a normal price. 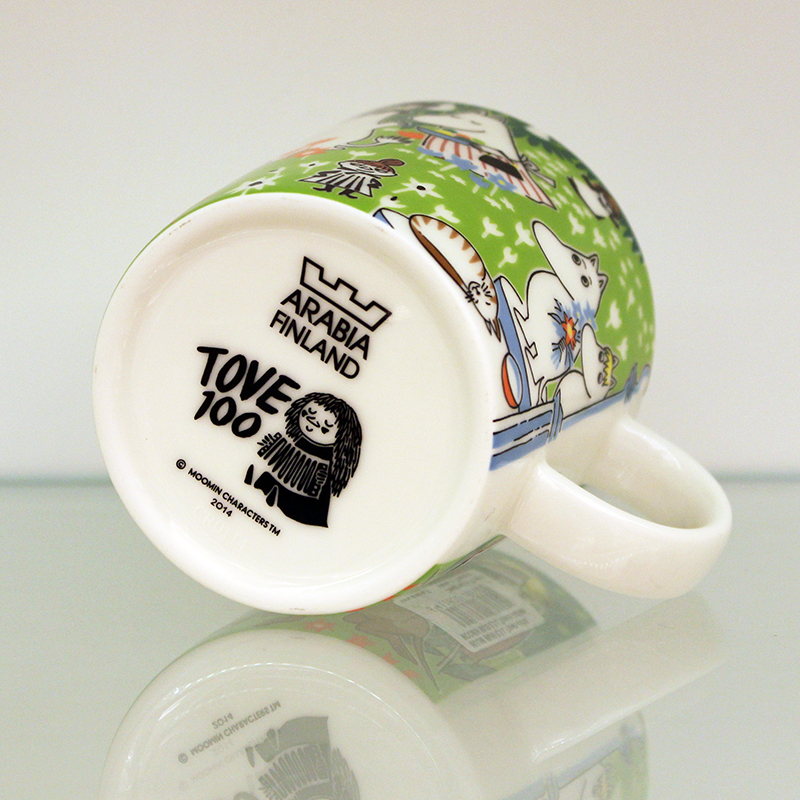 The jubilee mug’s special features were not limited to every sixth mug – like many other special Moomin mugs, also this had a special stamp on the bottom of the mug. The beautiful jubilee year logo was found on every mug celebrating Tove 100 anniversary.

Being a special mug in many ways, Tove’s jubilee Moomin mug and the same series of jars made also a lot of good. Two euros of each product sold were donated to UNICEF supporting children’s education around the world. UNICEF was selected for the co-operative partner because during her lifetime Tove Jansson had co-operated with the same organization for several years. At the end of the year, a total of over € 820,000 was donated to UNICEF with Arabia’s jubilee Moomin products being one of the products raising the donation sum.

In 2014, the apricot-colored Moomimamma mug replaced the red-colored one which had discontinued in 2013. The illustrations of the new version of Moominmamma character mug are from Moomin novel and comic which exceptionally carry the same name in Finnish (Muumipeikko ja pyrstötähti).

Tove Jansson’s the first official Moomin novel called Comet in Moominland, was published in 1946, from where mug designer Tove Slotte chose a picture of Moominmamma packing her belongings. The picture on the other side of the mug with Moominmamma baking the cake for Moomintroll is in turn from Tove and Lars Jansson’s comic #17 Moomin and the comet (1958). 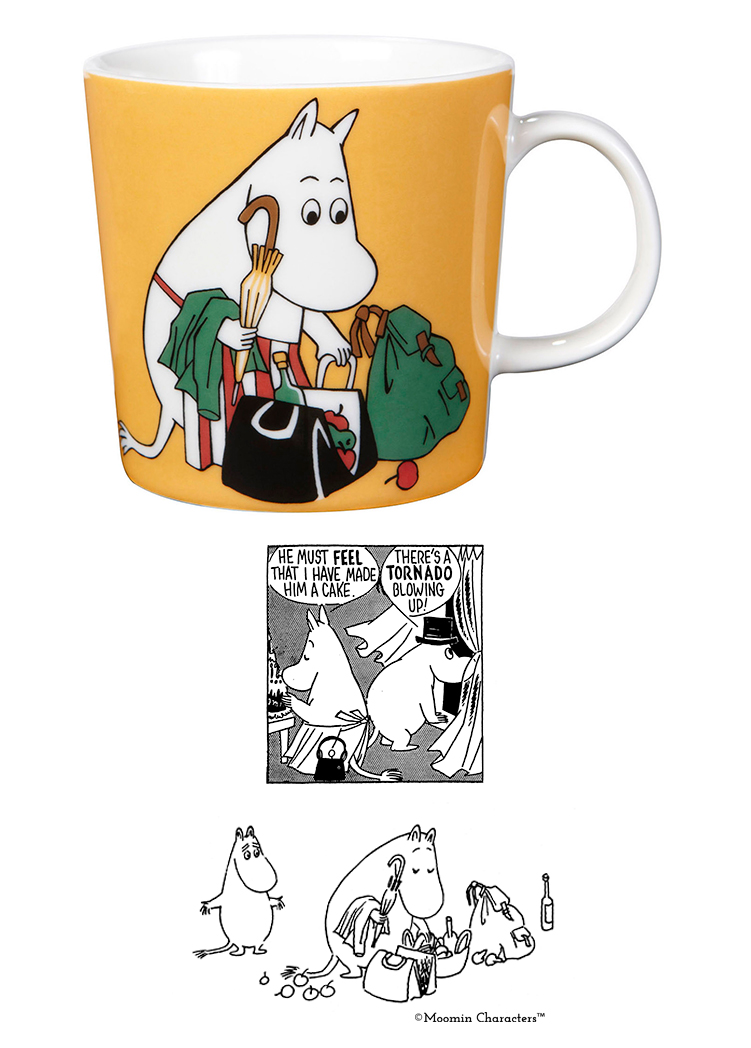 At the same time with Moominmamma, also the new dark blue Moominpappa Moomin mug was released. Moominpappa from behind is from Tove Jansson’s comic #2 Moomin and Family Life (1955).

Arabia’s mug designer Tove Slotte said: “I started designing the mug based on the illustrations of the old Moomin comics but the Moomin Characters’ approval department wished I could modify the Moominpappa a bit from both front and back, for example, his snout and eyes. The comic panel where Sniff stands on the beach and the other one where Moominpappa is sitting with Snorkmaiden, have been a good basis for the illustrations in this mug.”

The original picture in which Sniff is included is from the same as the previous original illustration, from Tove Jansson’s comic #2 Moomin and Family Life (1955), while the latter is inspired by Tove’s comic #3 Moomin on the Riviera (1955). 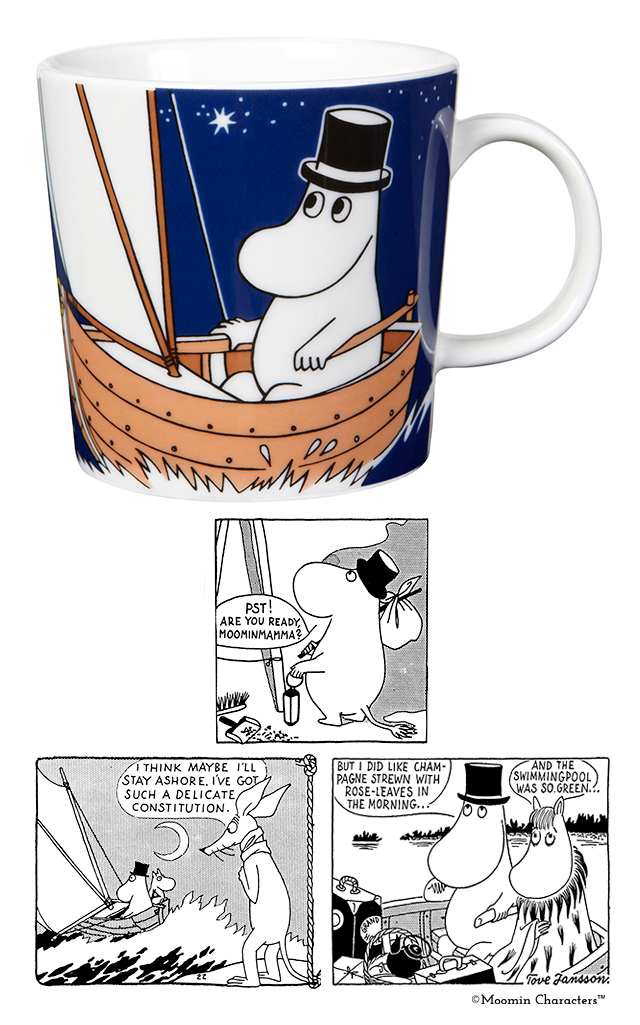 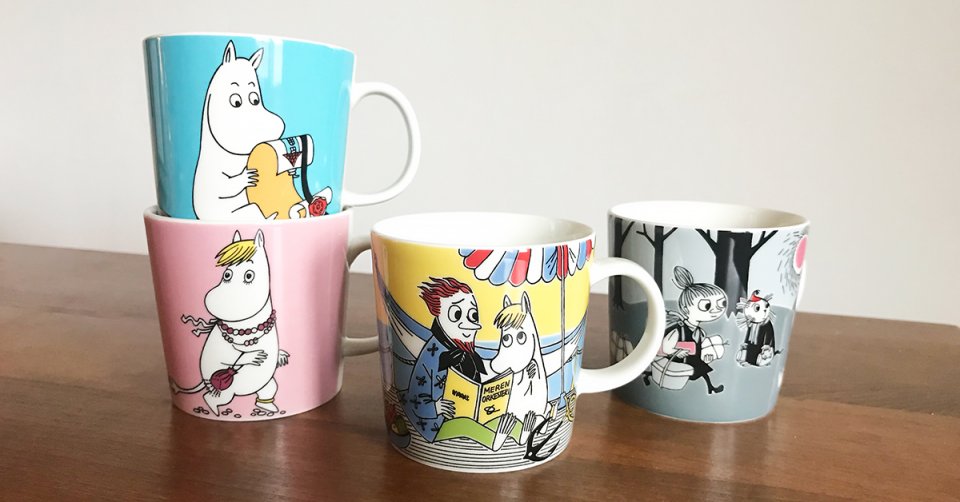 Even the smallest details of the Moomin mugs can be found in Jansson’s original artworks – the history of Moomin mugs by Arabia, part 15

The mug Moomintroll will be discontinued in December 2018!… 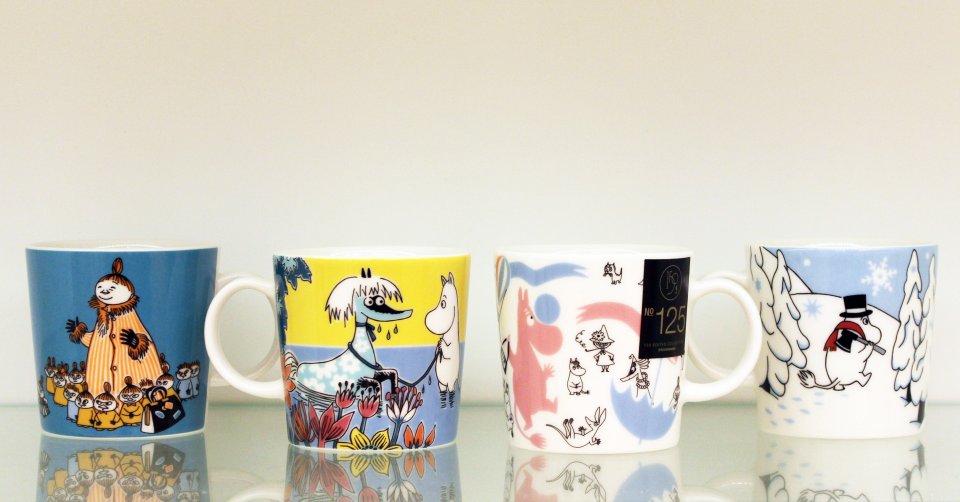 Another special mug was inspired by the wrapping paper Tove Jansson designed in the 50s!…