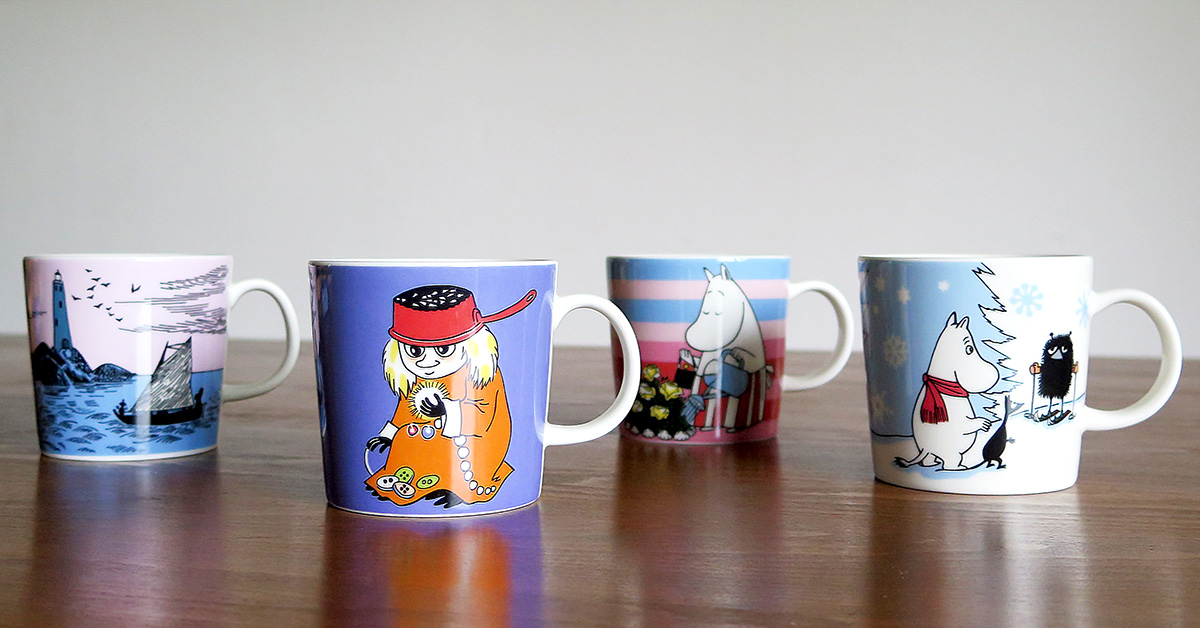 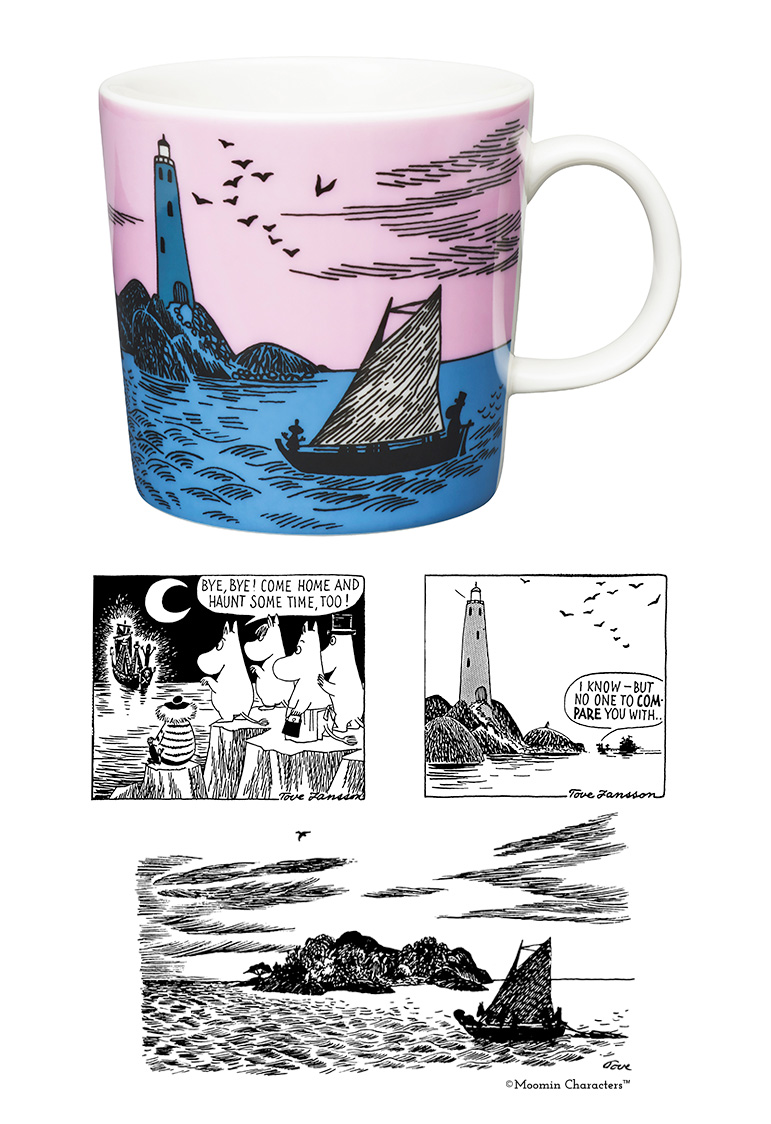 The 46th Moomin mug is called Night Sailing. The mug was launched in 2010 to celebrate the Moomin anniversary, 65 years since publishing the first Moomin novel. The mug was sold during the year 2010 and after that, it has only been available from independent resellers on flea markets.

The illustrations on the mug are from Tove Jansson’s comic #12 Moomin and the Sea (1957) and from the novel called Finn Family Moomintroll (1948). 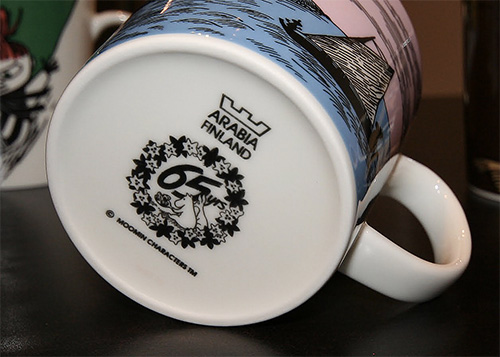 The extremely beautiful coloring and composing of the illustrations are made by Tove Slotte with her nearly 30 years of experience. Night Sailing mug can easily be identified as a special mug with its special stamp on the bottom of the mug. Instead of the traditional illustration of the painting Moomin, this mug has an anniversary logo.

Because the sea and archipelago were very important to Tove Jansson throughout her life, three euros from each Arabia’s Night Sailing mug was donated to WWF to protect the Baltic Sea. 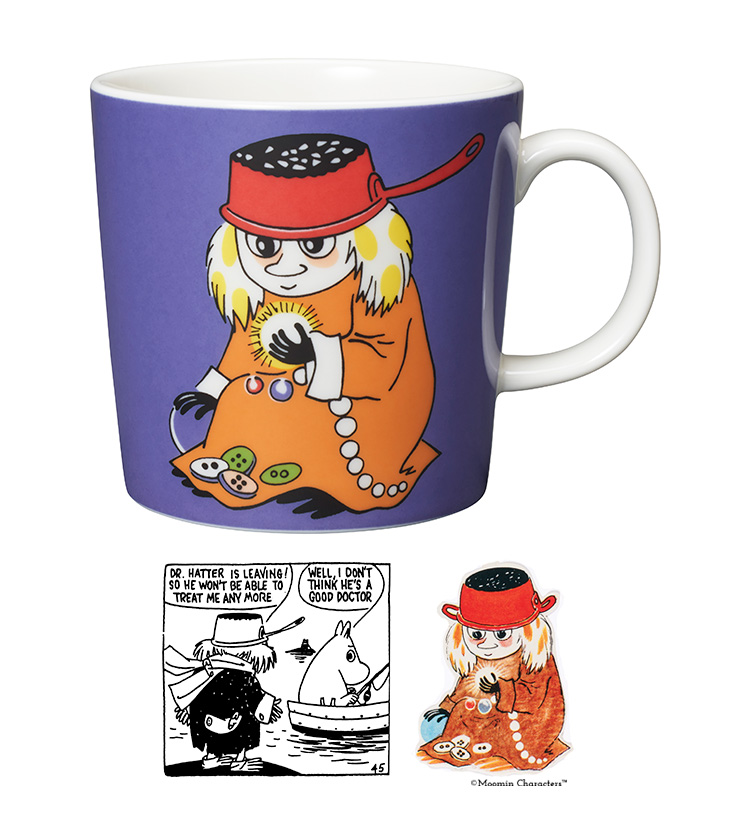 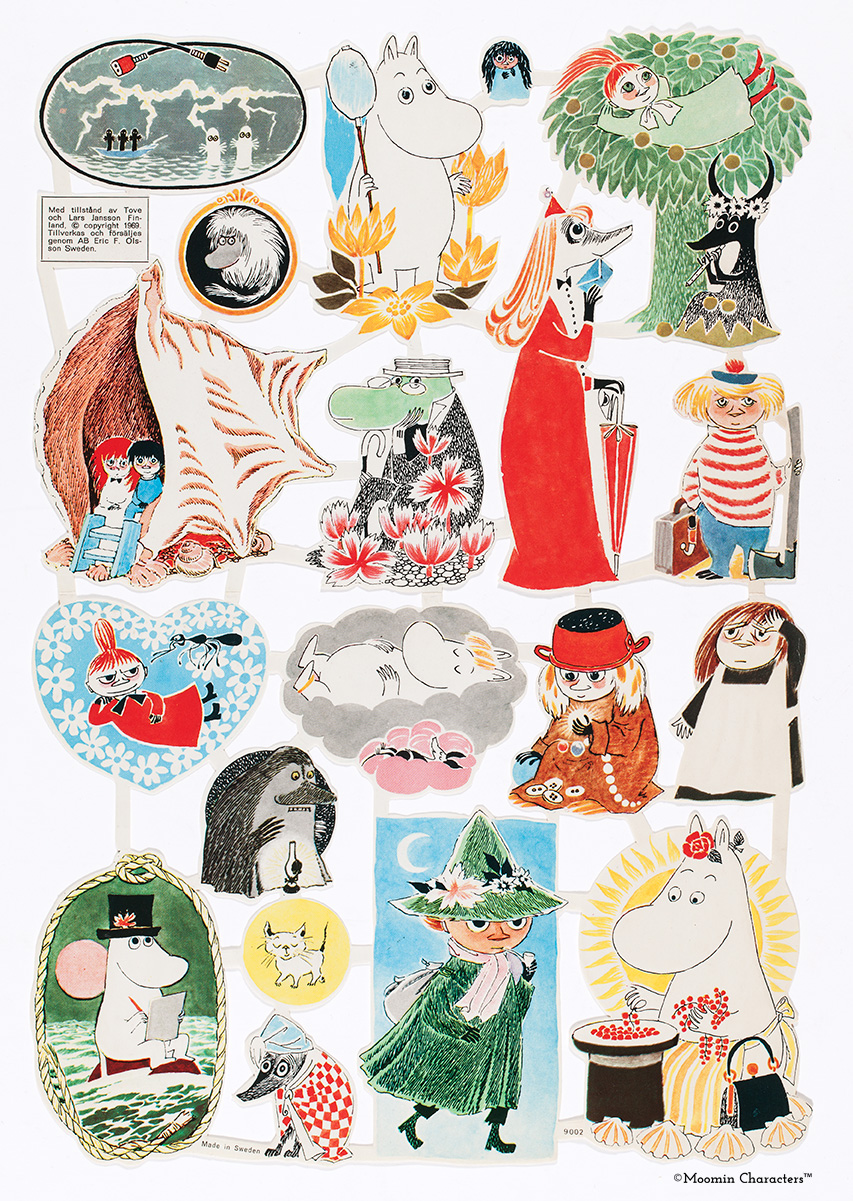 Usually, Arabia discontinues the production of the mug and the bowl at the same time, but the Muddler (and Inspector) bowls were both discontinued already as early as December 31, 2015, while the mugs remained in the range.

Did you know that there is a difference between the characters looking like each other, Muddler and Fuddler, who are featured in the novels and in the comics? The character in the novel The Exploits of Moominpappa (nowadays called Moominpappa’s Memoirs) is Sniff’s father Muddler (in Finnish called Hosuli, and in Swedish called Rådd-djuret) but in the comics, the looking alike character is his son, Fuddler (in Finnish again Hosuli, and in Swedish Klått-djuret). So, therefore, Sniff has also a brother, even if he is not drawn in the family tree. 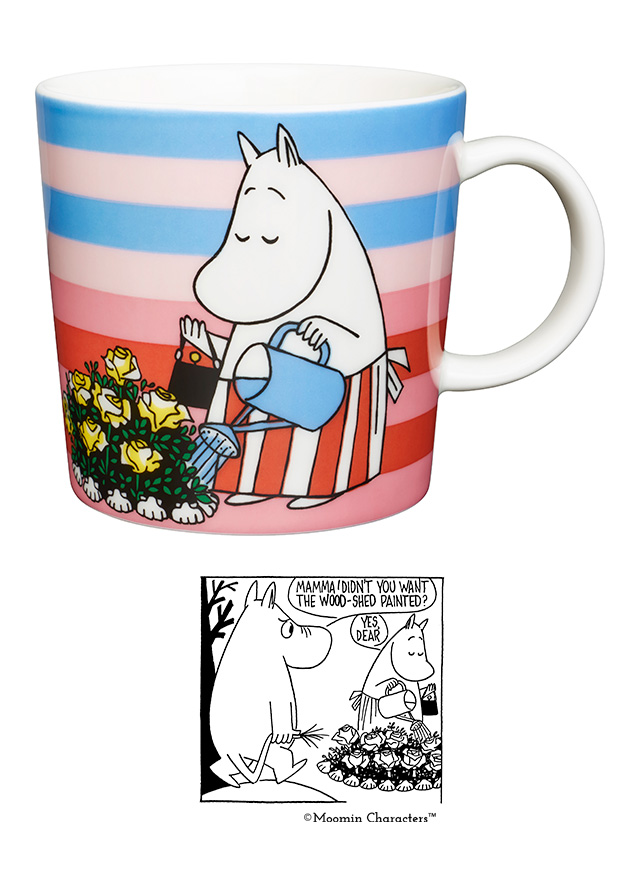 The fifth Moomin summer mug with striped background was launched in spring 2010. An illustration of Moominmamma in her rose garden is drawn by Tove Jansson and published first in her comic #18 Moomin and the Golden Tail (1958). The coloring and design of the mug are made by Arabia’s designer Tove Slotte.

The mug was launched together with the Moomin summer bowl with the same design. 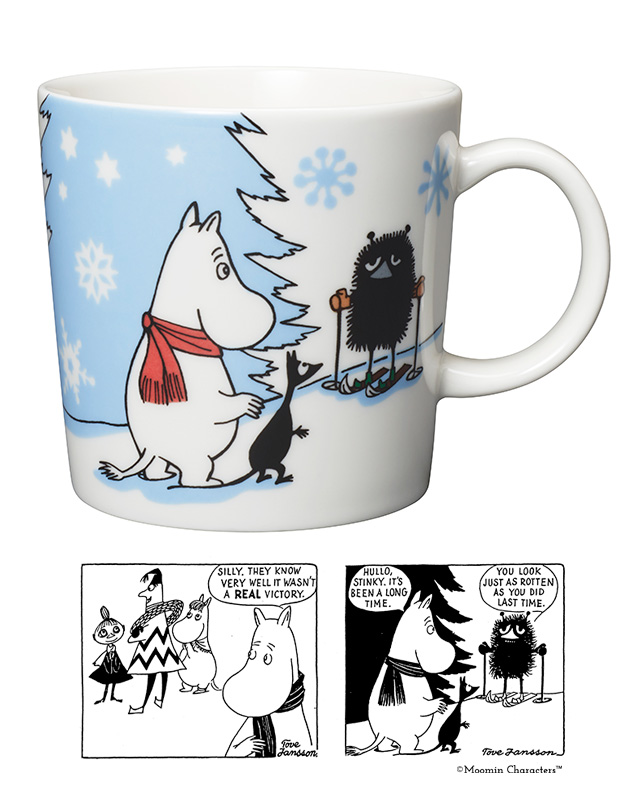 Moomin mug for winter 2010 was named after its illustrations: Skiing competition. Tove Jansson’s original drawings are from her comic #5 Moomin’s Winter Follies (1955). As usual, Arabia’s designer Tove Slotte has fitted the illustrations together in this mug.

This Moomin winter mug with a white background started a new winter mug era after four blue winter mug produced. The mug Skiing competition was sold in a gift box at the Iittala stores in Finland and without a box at the other resellers. 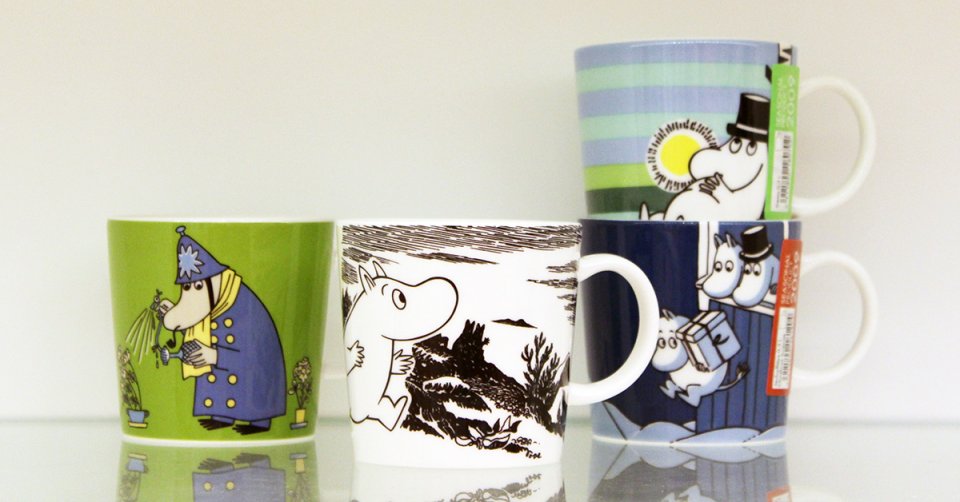 How does the Inspector differ from the other character mugs? The history of Moomin mugs by Arabia, part 11 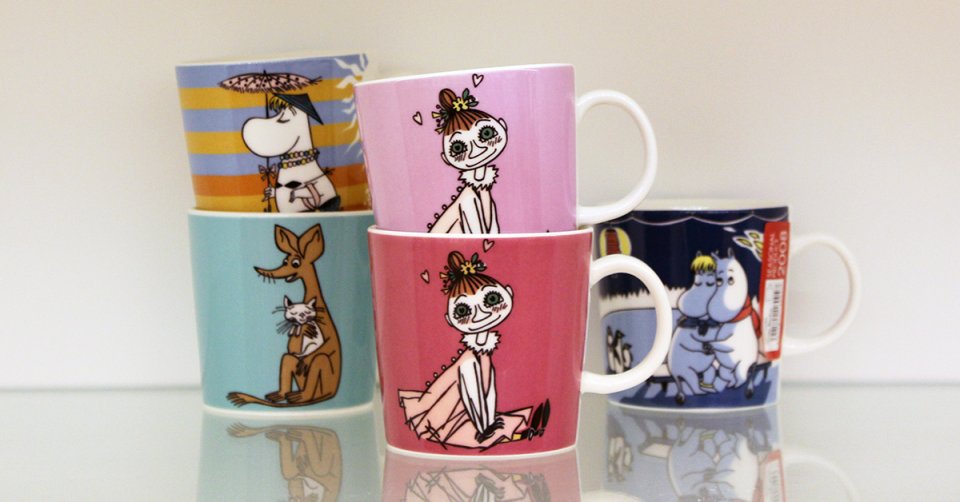 Looking for the right tone for the Mymble mug – the history of Moomin mugs by Arabia, part 10