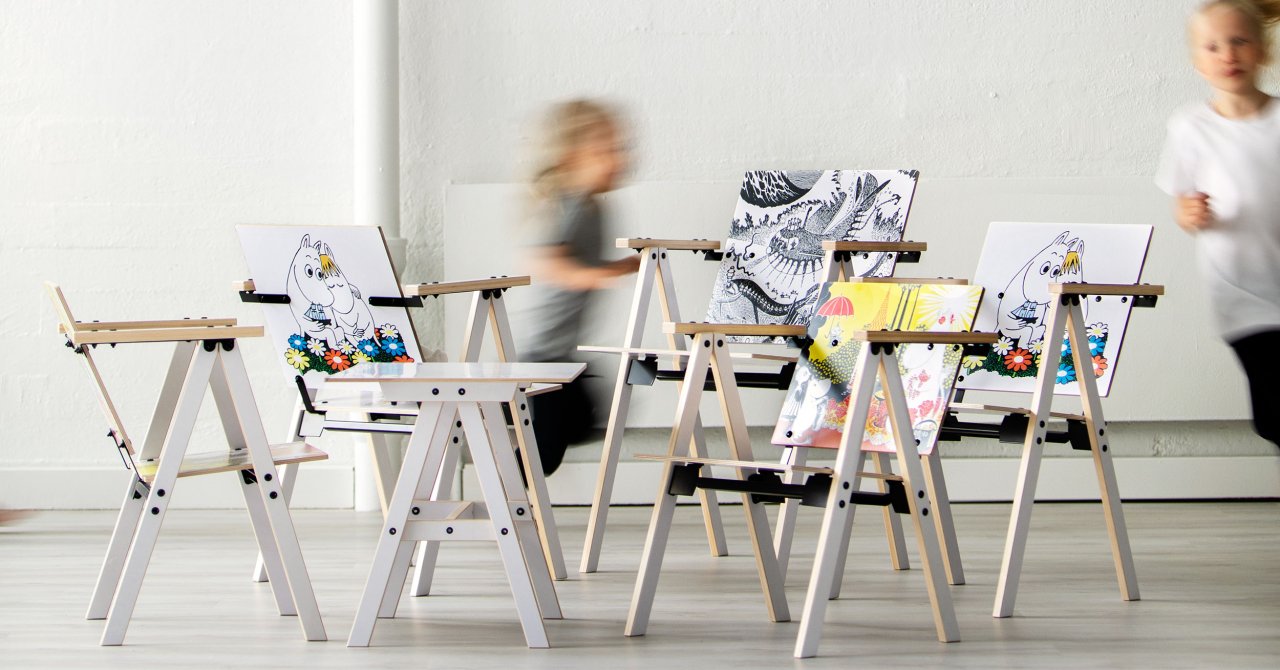 Celebrating the Moomins 75 year anniversary with authentic Finnish products, the Moomin Furniture -line is finally here! As the series' chair model acts Yrjö Kukkapuro's ergonomically designed chair that was created in the ’90s with the purpose of acting as a foundation for various artists' and illustrators' works. Some 20 years later the chairs are decorated with lovely Moomin illustrations.

50 years ago, Yrjö Kukkapuro read The book about Moomin, Mymble and Little My to his daughter Isa time and time again. In the 80’s, Isa read the same book to her daughter Ida, who now reads it to her son Oskar. The colours and exceptional illustrations in the book made a strong impression on the Kukkapuro family, but also resembled the everyday life in the Kukkapuro atelier in Kauniainen.

“My parents Yrjö and Irmeli Kukkapuro met in 1955 as young artists studying at Ateneum. Together they created their own world where art and design were ever present. They lived together in their own bubble where rules were established based on what was the most fun and what best served these purposes. In a sense, the utopia depicted in the Moomin books was similar to their everyday life which made them so fun to read to the whole family”, daughter Isa Kukkapuro-Enbom says.

Through the windows of the 200 square meter studio in Kauniainen, a terrific view opens up over the nature that has inspired Kukkapuro while making his designs as well as the ergonomics of his products, which has always been the starting point in his design. For over 60 years, Yrjö Kukkapuro has been occupied with furniture design and he’s now making Moomin products with a used Tattoo chair from 1998 as base. Even though the chair has been used in cooperation with various graphical artists through the years, very few versions have been mass produced.

Yrjö was born during the same year that Tove initiated her studies at Ateneum. Due to their age gap, Yrjö and Tove seldom moved in the same circles, except for occasional encounters. Yrjö admirably observed his older colleagues’ work. The fact that their creations meet 87 years later is in Yrjö’s mind a great honour.

Kukkapuro’s products have all the details carefully figured out

Children’s furniture have previously not been a part of Yrjö Kukkapuro’s repertoire, since they seldom get ordered to public spaces. However, a small selection of products were born before the Moomin furniture series, the first one being a rocking chair to his two year old daughter Isa. Yrjö’s multifaceted mindset was clearly present there too, since the rocking chair was also tailored to adult use. This had been ensured with the measurements.

The Moomin furniture line includes three different chairs and a table. The smallest chair is suitable for children over two years, the medium chair for school-aged kids, and the large one for adults and teenagers. The table can be used for children’s crafts or for example as a small balcony table. These children’s chairs also fit adults! 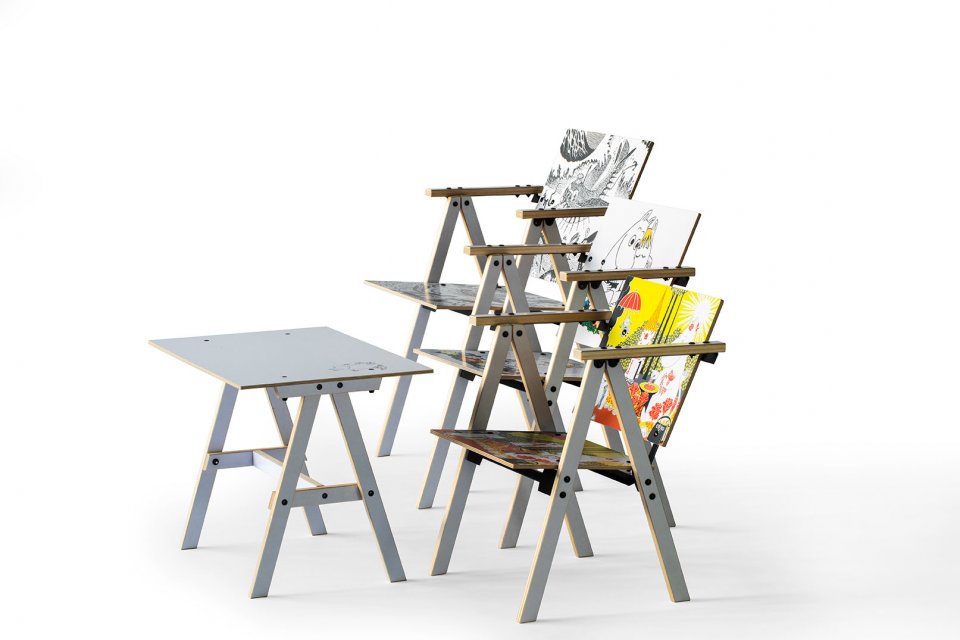 The Moomins message is more relevant than ever 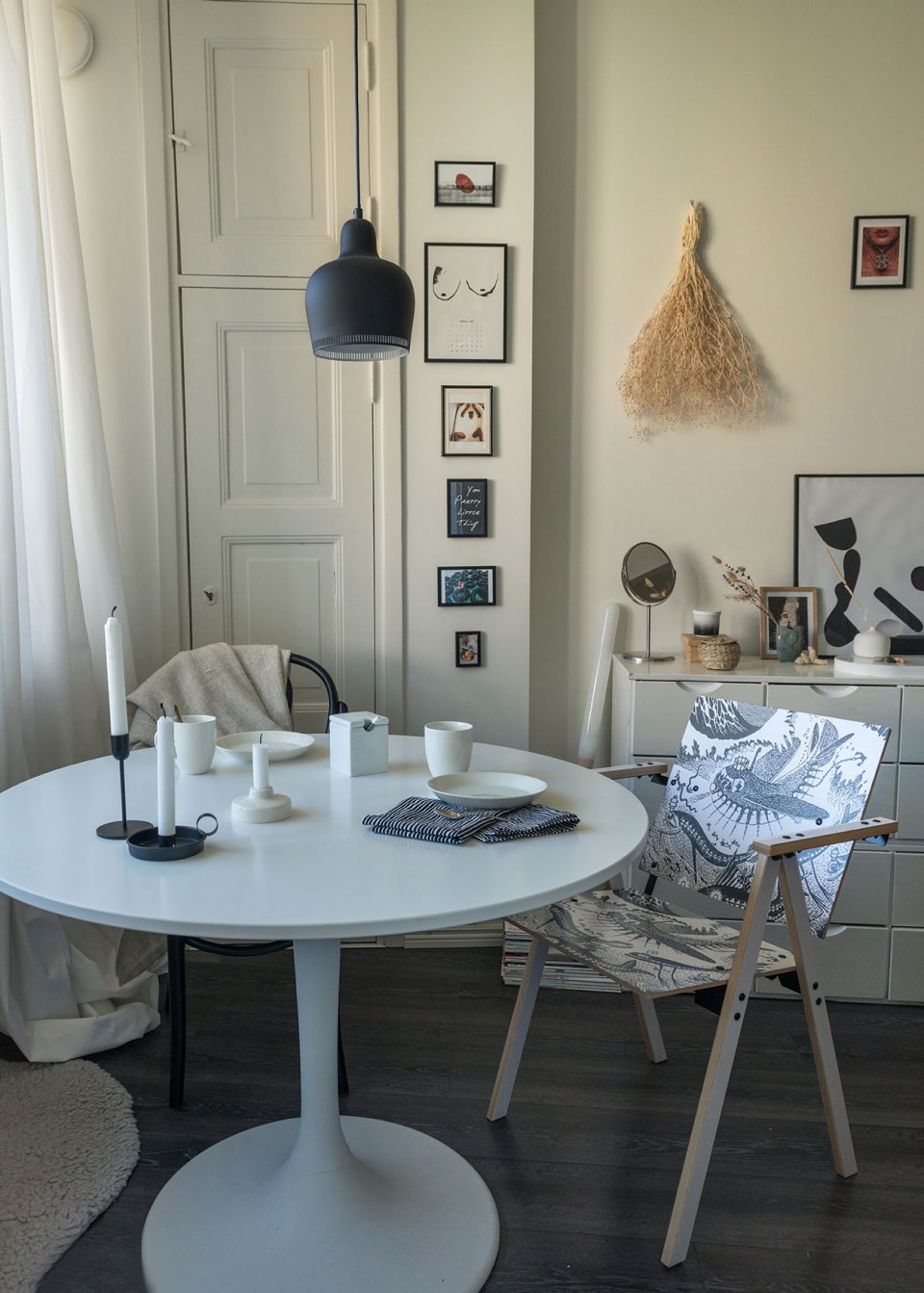 The Moomins message of love, freedom and the courage of finding one’s own path could hardly be more relevant. “In the post-pandemic era all hope, support and love is necessary.” says the curator Isa Kukkapuro-Enbom. “The sentence displayed on the childrens chairs illustration “What a relief it is to tell a tale that ends supremely well.” – those feelings of relief are missing in all of us. The thought behind the Moomin Furniture -series is to bring joy and well-being to homes and public spaces.”

Finnish design made in Finland

The product line has been awarded with the Key Flag certificate – Moomin Furniture products are produced in Finland. The material is certified birch plywood which, according to Yrjö Kukkapuro is “the most lovable material in the world”. The products’ laminated coating is durable and suitable for children’s games and everyday use. Sold in the flatpack format, the package saves packaging material and space in transport.

The Moomin Furniture product line is designed in cooperation with Modeo and Studio Kukkapuro, where Modeo acts as the product manufacturer. Modeo has exclusive rights to sell and manufacture almost all of Yrjö Kukkapuro’s products globally.

The Moomin Furniture line is available for purchase at Finnish Design Shop with worldwide delivery. The series is also sold by yrjokukkapuro.com and Veke webshops as well as at Yrjö Kukkapuro’s store in Helsinki, and at Modeo’s other shops around Finland. Express your interest in ordering Moomin furniture together with your other Moomin purchases from the moomin.com online store by leaving your e-mail address on the product page.