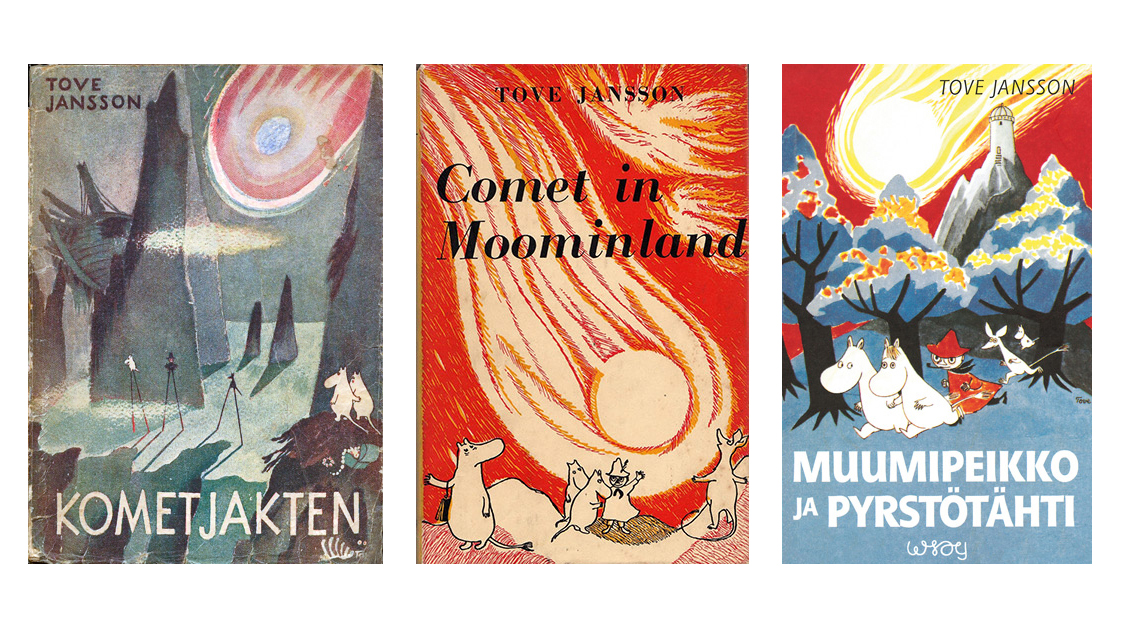 The second Moomin book, Comet in Moominland (Swedish title Kometjakten / Mumintrollet på kometjakt / Kometen kommer) was published in 1946. Comet in Moominland is often seen as a first novel in the series as it introduces many of the main characters, like Snufkin and Snorkmaiden, and is set in Moominvalley. Also Snork, and the Muskrat are presented in this book.

Right after the first Moomin book, The Moomins and the Great Flood, was published, Tove Jansson started to work with the next story. Writing and drawing Moomin stories gave Tove a new vent for expressing herself. Like the first book, also Comet in Moominland was partly written during the war when the life was unpredictable.

Comet in Moominland, is about big catastrophes and natural disasters. The war, which was present on people’s life while the book was written, is seen in the book for example as refugees and threatening atmosphere. The comet destroying everything has been compared to the atomic bomb. These are quite exceptional topics for children’s book. Having the strength and ability to live and manage were important messages.

Like in the book The Moomins and the Great Flood, also in Comet in Moominland, the relationship of family members and an openness towards visitors are essential topics.

Tove Jansson used to change some of the illustrations and texts for different editions and language versions of her Moomin books and there are three different versions of the book Comet in Moominland. In the original version there are watercolour illustrations and in the subsequent version they are ink drawings. In the latest version from 1968 there are several major changes: the nature descriptions have been changed to be more like the nature is in Finland, Moominpappa wants palm wine instead of milk, and instead of silk-monkey Sniff saves the cat.

By reading the different versions of the books it can easily be seen how the Moomin characters have changed and developed over the decades. In the first Moomin books the Moomins have for example narrower nose as the same characters in the later editions or books. See the pictures of the evolution from here.

The first Moomin book: The Moomins and the Great Flood, 1945