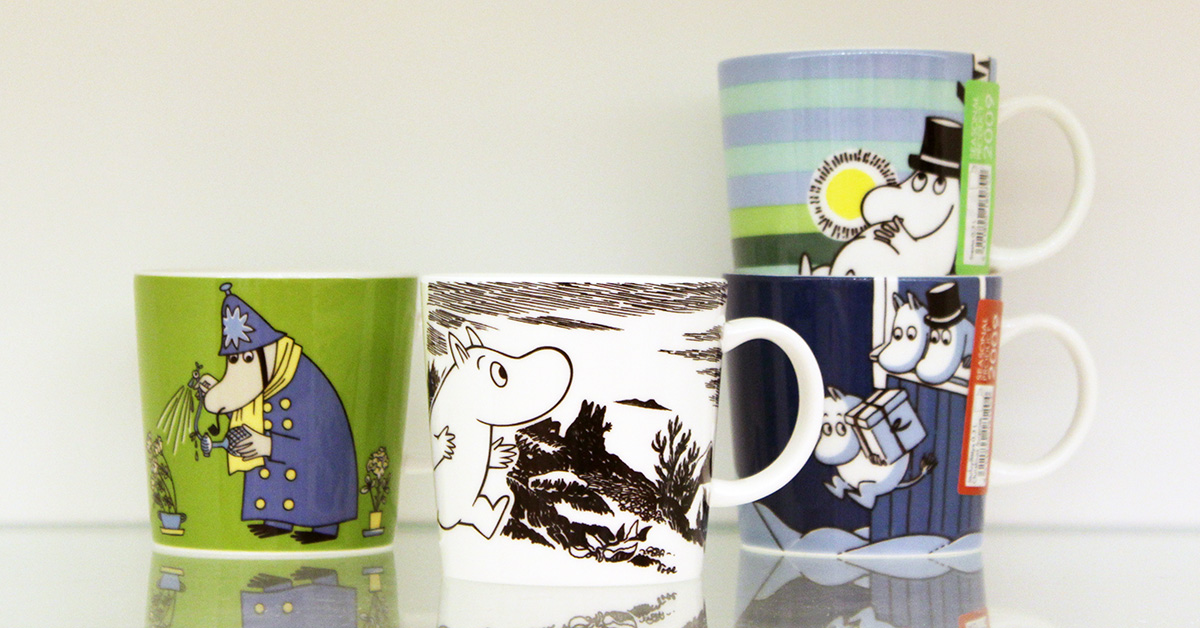 One of the Hemulens, Inspector, was chosen for the character Moomin mug by Arabia in 2009. Based on the original drawings of Tove Jansson, Tove Slotte, a decorative designer of the Moomin mugs, created a green mug with the illustrations chosen from the comics #21 Fuddler’s Courtship (1959) and #16 Conscientous Moomin (1958). Both of the comics are co-written by Tove and her brother Lars Jansson and drawn by Tove Jansson herself.

Read more about the co-operation of the siblings from here. 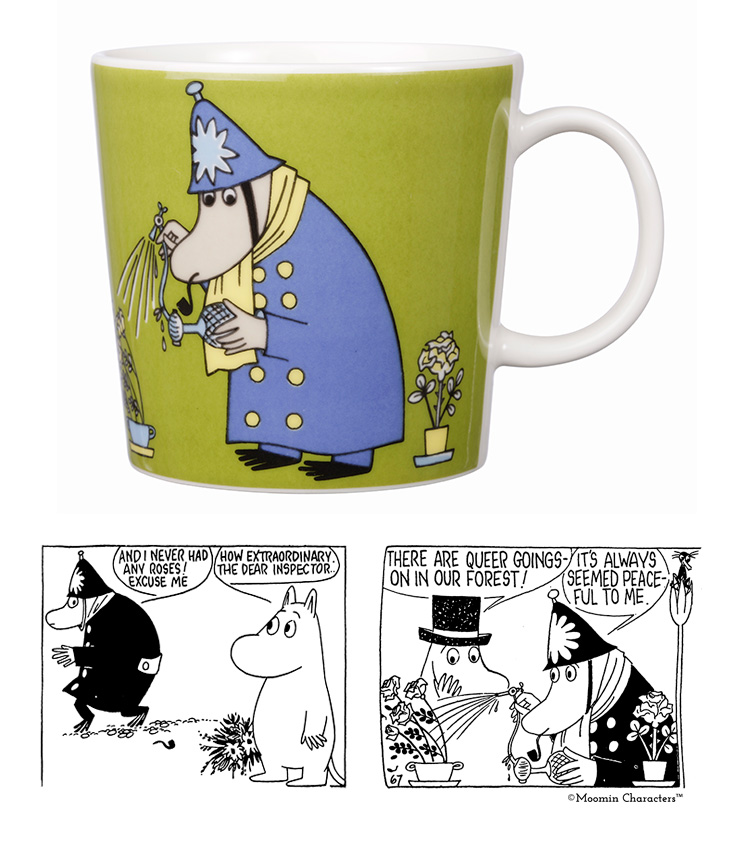 The Inspector mug is actually a bit different to other character mugs because it is one of the mugs currently in Arabia’s range without a bowl with the same design. Usually, Arabia discontinues the production of the mug and the bowl at the same time, but the Inspector bowl was discontinued already as early as December 31, 2015, while the mug remained in the range.

The original inspiration for the Moomin mug for summer 2009, Siesta, is from Tove and Lars Jansson’s comic #16 Conscientous Moomin (1958). In the selected comic strip, however, it is Moomintroll instead of Moominpappa sitting under the tree. Tove Slotte has just added a hat to the original drawing to change the character to Moominpappa while otherwise remaining loyal to the original illustration. 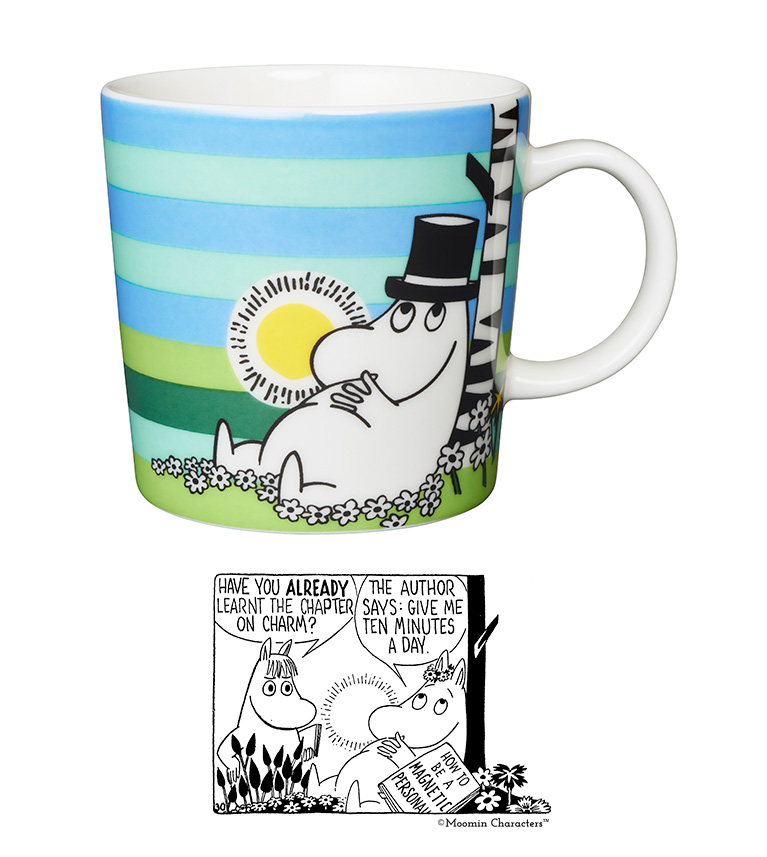 Summer 2009 mug Siesta was the fourth summer mug with the striped background and was launched together with the Moomin summer bowl with the same design.

Arabia’s Adventure Moomin mug was launched in 2009 as a part of the Adventure product series. The beautiful black and white graphic artwork on the mug Tove Slotte chose from Tove Jansson’s novel Finn Family Moomintroll (1948).

The running Moomintroll presented on the mug was originally drawn by Tove Jansson in her comic #18 Moomin and the Golden Tail (1958). This comic was the last Tove both wrote and drew. Later, the Evening News newspaper still published few comics made in co-operation with Tove and her brother Lars, as well as numerous comics that were entirely created by Lars Jansson. 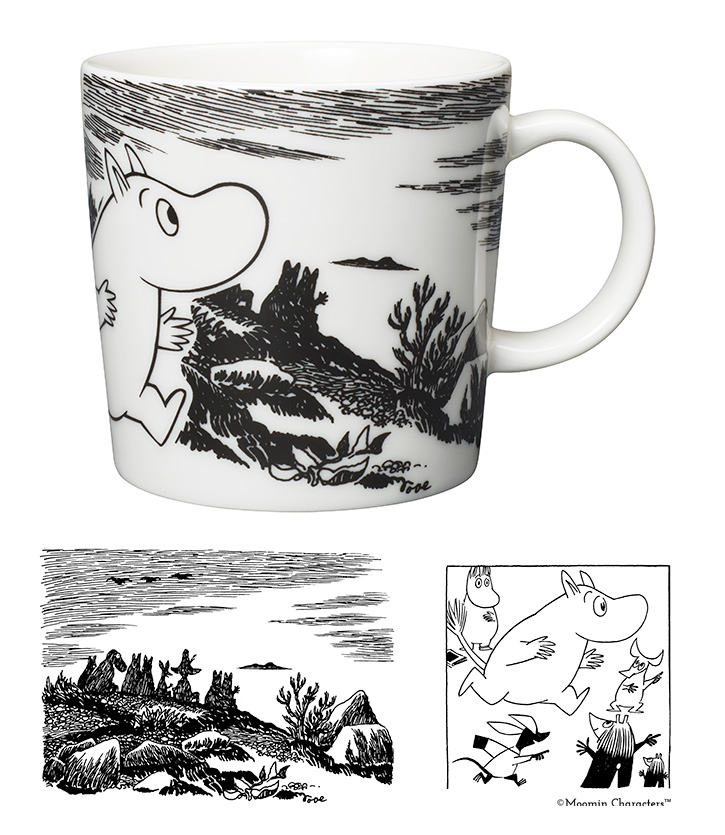 The fourth, and at the same time the last, dark blue winter mug, Christmas surprise, was launched in the late autumn of 2009. As compared to the older winter mugs, Tove Slotte chose a wide selection of illustrations for this winter mug as well.

The members of the Moomin family presented on the winter mug 2009, are from Tove and Lars Jansson’s comic #19 Moomin Winter (1959).

Looking for the right tone for the Mymble mug – the history of Moomin mugs by Arabia, part 10 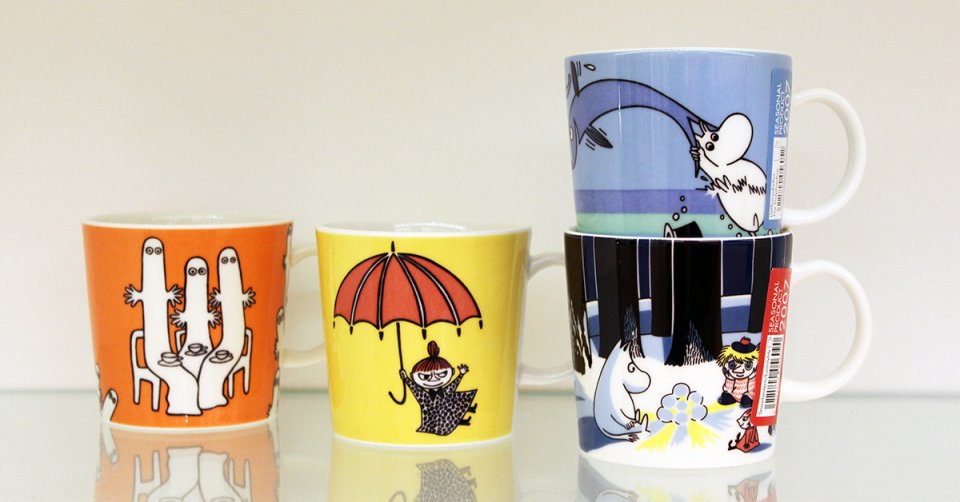 #34 Mug Hattifatteners 2007- Arabia’s orange Moomin mug, which is still in production, showcases the mysterious Hattifatteners. The illustrations are…